The Sickness & Greed in Football 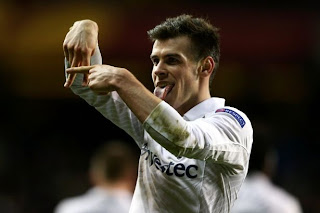 So, it was a record-breaking transfer window in the world of English football (that's soccer to my American readers) this year in more ways than one.

Premier League clubs spent a record £630m this summer as a result of the injection of £5.5 billion spent on tv rights.  Tottenham received a jaw-dropping £85m from Real Madrid for 24 year old Gareth Bale who will be paid an incredible £300,000 a week. His transfer fee was a world record.

The Premier League might have spent more than any other, but Europe's nouveau riche in France, and the 'old moneyed' in Italy, also made headlines.

All in all the 20 premiership teams spent £630,000,000. Am I alone in feeling repulsed at that figure? Am I the only one wondering what good that amount of money could in a world where children starve to death every day, and in a country where we are suffering the bite of austerity, and people still sleep on the streets?

And what do we get for our £630,000,000? The injection of this amount of money over the years since I first went to watch Charlton Athletic play at the Valley in about 1975 has led us far away from the ideals of sportsmanship, integrity, trying your best and learning what it's like to win and to lose. We have carefully cultivated a band of ignorant, preening, narcissistic, dishonest millionaires who are convinced of their god-like status, due to the adulation of the fans and their ability to get pretty much anything they want. 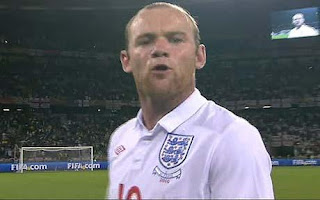 They have regaled us with the sordid personal details of their lives, brawled, spat, racially abused and sworn their way into every home with a television in the country. We set these ugly caricatures up as models of what it means to achieve success to our children presenting them with achievable goals which can only serve to cause jealousy and envy to fester as they wonder why they haven't got a Ferrari and a Spice Girl.

Can you tell I'm not a fan?

Even my friends who love football are constantly upset about the price of team shirts, season tickets, and transfer fees. I have to admit I struggle to understand why they are still attracted to the tribalism and disappointment that football seems to be about to me. Yet amazingly, so many retain loyalty to this cult come what may. 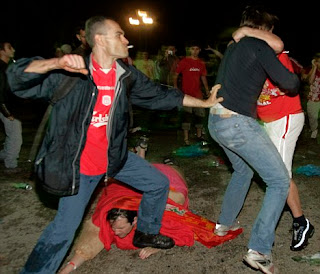 Now don't get me wrong, it's not football in and of itself that bothers me. Not at all. It's more the fact that where football is today seems so far away from going and watching a match and enjoying good sportsmanship, it is barely recognisable. I have long thought it would be amazing if the football enjoying public took a step away from the Premiership and started supporting lower league clubs who could really benefit from their support. I just don't see the attraction of watching over paid, over primped boys nancy about on a football pitch.

But Mark, I hear you shout, what's it got to do with you? I thought you advocated freedom and subsidiarity and non-interference. So let the people who want to be robbed by these business people in shiny suits in order that they might see a twenty-year-old tattooed nerk swear at their children with impunity, or football fans throwing coins at people they don't like, or making monkey noises at black players, or demanding any women on the pitch immediately remove her clothing, let them.

Freedom
199. Freedom is the highest sign in man of his being made in the divine image and, consequently, is a sign of the sublime dignity of every human person [435]. "Freedom is exercised in relationships between human beings. Every human person, created in the image of God, has the natural right to be recognized as a free and responsible being. All owe to each other this duty of respect. The right to the exercise of freedom, especially in moral and religious matters, is an inalienable requirement of the dignity of the human person"[436]. The meaning of freedom must not be restricted, considering it from a purely individualistic perspective and reducing it to the arbitrary and uncontrolled exercise of one's own personal autonomy: "Far from being achieved in total self-sufficiency and the absence of relationships, freedom only truly exists where reciprocal bonds, governed by truth and justice, link people to one another"[437]. The understanding of freedom becomes deeper and broader when it is defended, even at the social level, in all of its various dimensions.
200. The value of freedom, as an expression of the singularity of each human person, is respected when every member of society is permitted to fulfil his personal vocation; to seek the truth and profess his religious, cultural and political ideas; to express his opinions; to choose his state of life and, as far as possible, his line of work; to pursue initiatives of an economic, social or political nature. This must take place within a "strong juridical framework"[438], within the limits imposed by the common good and public order, and, in every case, in a manner characterized by responsibility.
On the other hand, freedom must also be expressed as the capacity to refuse what is morally negative, in whatever guise it may be presented [439], as the capacity to distance oneself effectively from everything that could hinder personal, family or social growth. The fullness of freedom consists in the capacity to be in possession of oneself in view of the genuine good, within the context of the universal common good [440].

Wealth exists to be shared329. Riches fulfil their function of service to man when they are destined to produce benefits for others and for society. [685] “How could we ever do good to our neighbour,” asks St. Clement of Alexandria, “if none of us possessed anything?”. [686] In the perspective of St. John Chrysostom, riches belong to some people so that they can gain merit by sharing them with others. [687] Wealth is a good that comes from God and is to be used by its owner and made to circulate so that even the needy may enjoy it. Evil is seen in the immoderate attachment to riches and the desire to hoard. St. Basil the Great invites the wealthy to open the doors of their storehouses and he exhorts them: “A great torrent rushes, in thousands of channels, through the fertile land: thus, by a thousand different paths, make your riches reach the homes of the poor”. [688] Wealth, explains Saint Basil, is like water that issues forth from the fountain: the greater the frequency with which it is drawn, the purer it is, while it becomes foul if the fountain remains unused. [689] The rich man — Saint Gregory the Great will later say — is only an administrator of what he possesses; giving what is required to the needy is a task that is to be performed with humility because the goods do not belong to the one who distributes them. He who retains riches only for himself is not innocent; giving to those in need means paying a debt. [690]

331. The relation between morality and economics is necessary, indeed intrinsic: economic activity and moral behaviour are intimately joined one to the other. The necessary distinction between morality and the economy does not entail the separation of these two spheres but, on the contrary, an important reciprocity. Just as in the area of morality one must take the reasons and requirements of the economy into account, so too in the area of the economy one must be open to the demands of morality: “In the economic and social realms, too, the dignity and complete vocation of the human person and the welfare of society as a whole are to be respected and promoted. For man is the source, the centre, and the purpose of all economic and social life”


Anyway you get the gist, there's loads more there if you want to follow the link. The point being, I can't make you stop supporting these clubs, but I am trying here to ask you to think about what the phenomenon of Premiership Football brings to our homes, our children, and our society, and to consider for a moment, is it worth it?
Catholic Social Teaching Football Gareth Bale Premier Leaue Soccer Transfer Window