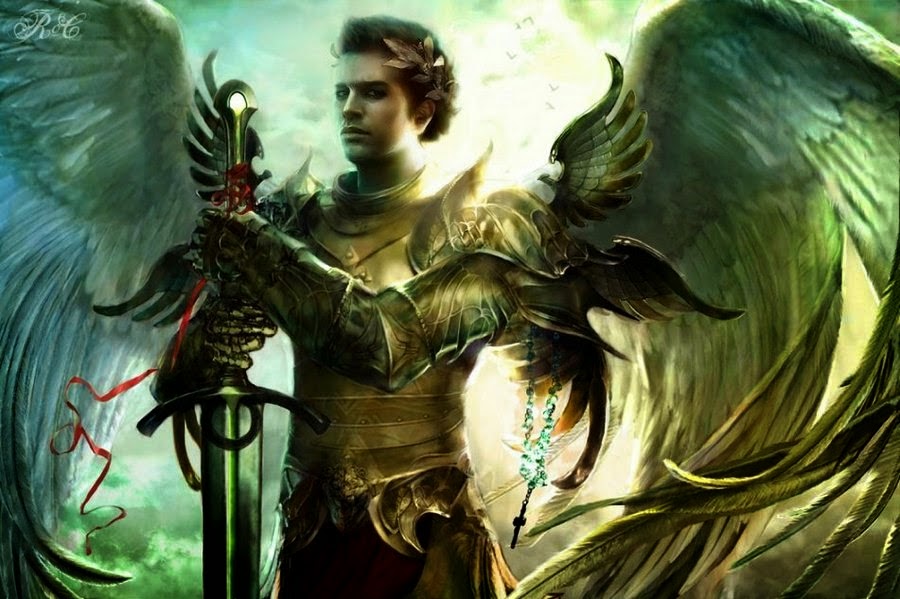 This week I am talking at Walsingham House about the Archangel Michael prayer. I have thus been reminding myself of what I have learnt and what I have read about Angels.

Providentially, Paul Priest who blogs as On The Side of the Angels, has posted a couple of links to really useful talks on the subject of Angels. I always find this sort of coincidence a blessing, and so cannot but consider that God & my Guardian Angel want me to impart some of this information in my talk.

To this end, I have had a good listen to the talk Paul links to by Fr. Chad Ripperger here. I would highly recommend you take the opportunity to do so also. I should warn you at 1:03ish, he answers a question about demons threatening him during exorcism which is a bit scary!

Fr. Ripperger is a member of The Priestly Fraternity of St. Peter (FSSP) a society of apostolic life of pontifical right founded with the approval of His Holiness John Paul II. He is also a professor of Dogmatic and Moral Theology and Philosophy at Our Lady of Guadalupe Seminary in Denton, Nebraska. This talk is really fascinating, although it is likely you will find it extremely disconcerting, because it reveals a supernatural dimension to our reality which we have tried so hard to rationalise in today's society. To hear someone talking this way is rather frightening. We don't hear much (anything?) from our bishops and priests today about Satan, hell, and damnation, or the Angels. As the Vatican Exorcist, Fr. Gabriel Amorth said in an interview in 2006:


The fact that he has managed to convince people that he does not exist. He has almost managed it, even within the Church. We have a clergy and an Episcopate who no longer believe in the Devil , in exorcism, in the exceptional evil the Devil can instill, or even in the power that Jesus bestowed to cast out demons. For three centuries the Latin Church – in contrast to the Orthodox Church and the various Protestant professions – has almost totally abandoned the ministry of exorcism. So because they no longer perform exorcisms, or study them, and never having seen them, the clergy no longer believe in them. And they no longer believe in the Devil . We have entire Episcopates trying to counter exorcism. We have countries completely devoid of exorcists, such as Germany, Austria, Switzerland, Spain and Portugal.

Pope Francis, however, teachings on Satan are regarded as the most old school of any pope since at least Paul VI, whose papacy in the 1960s and 1970s fully embraced the notion of hellish forces plotting to deliver mankind unto damnation. Pope Francis has not only dwelt far more on Satan in sermons and speeches than his recent predecessors have, but also sought to rekindle the Devil's image as a supernatural entity with the forces of evil at his beck and call.

'But Father, how old-fashioned you are to speak about the Devil in the 21st century,' Francis, quoting those who have noted his frequent mentions of the Devil, said last month while presiding over Mass at the Vatican's chapel in St. Martha's House. He warned those gathered on that chilly morning to be vigilant and not be fooled by the hidden face of Satan in the modern world. "Look out because the Devil is present," he said. 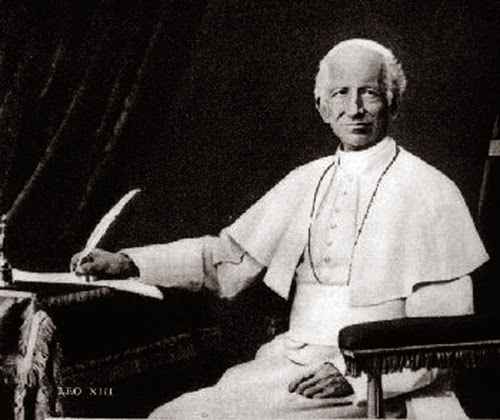 The prayer to St. Michael the Archangel has a fascinating provenance and is attributed to Pope Leo XIII who reigned from February 1878 to his death in 1903 and was well known for his intellectualism. An article in the Roman journal Ephemerides Liturgicae (V. LXIX, pages 54–60) in 1955 gave an account in Latin and Italian of how the St. Michael prayer (in the Leonine Prayers) originated. Footnote nine of this account quotes an article in another Italian journal called La Settimana del Clero in 1947 by Fr. Domenico Pechenino who worked at the Vatican during the time of Leo XIII, in which he said that after Leo XIII had celebrated a Mass he seemed to be staring at something, then went to his private office, with his attendants asking if he was well. Half an hour later he had written the St Michael prayer.

According to the same article in Ephemerides Liturgicae, Cardinal Giovanni Nasalli Rocca di Corneliano wrote in his Litteris Pastoralibus pro Quadragesima (Pastoral Letters for Lent) that according to Leo's private secretary, Monsignor Rinaldo Angeli, Leo XIII had seen a vision of demonic spirits who were congregating on the Eternal City (Rome); he wrote the St Michael prayer, and often said it, in response.

Pope Leo XIII also personally wrote an exorcism that is included in the Roman Ritual, and recommended that bishops and priests read these exorcisms often in their dioceses and parishes. He himself often recited them. Several variants of this story are told, e.g., that the pope was carried off by those around him to another room where he came around, or a detailed conversation between a voice apparently of Satan, who says he will destroy the Church, another attributed to God, who tells him to do what he will. According to a Father William Saunders writing in the Arlington Catholic Herald of 2 October 2003, Leo said that God gave Satan the choice of one century in which to do his worst work against the Church, and the devil chose the 20th century.

In 1934, a year after the appearance of the earliest printed version of the story, a German writer, Father Bers, tried to trace the origin of the story and declared that, though the story was widespread, nowhere could he find a trace of proof. Sources close to the institution of the prayer in 1886, including an account of a conversation with Pope Leo XIII about his decision, say nothing of the alleged vision. Father Bers concluded that the story was a later invention that was spreading like a virus. The story is also found in Carl Vogl's 1935 Begone Satan: A Soul-Stirring Account of Diabolical Possession in Iowa.

Whatever the reality about its origin, the prayer is a favourite in my house. We feel palpably under attack from time to time and always turn to Archangel Michael to defend and support us. As the demon tells Fr. Ripperger, without the protection of the Angels, it could snap his neck in a second. Perhaps the everyday battle we all face is a little less dramatic than that, but I have no doubt that the enemy uses our weaknesses, our predispositions to addiction and temptation, to disturb our rational action, causing us mental distress, to focus on the wrong things, to feel disrupted and to act in a misguided fashion.

Of course this is all tied in closely with our alignment to the divine will of God and our propensity to sin and find ourselves distracted from God by more mortal, worldly concerns. I will be going into more detail at Walsingham House, so will keep my powder dry here for now. I would just finish by encouraging everyone to develop a relationship with their Guardian Angels, listen to Fr. Ripperger's talk to learn ways to do this.