Who Stands to Gain from Tragedy?

This is a guest post from freelance writer Ruari McCallion 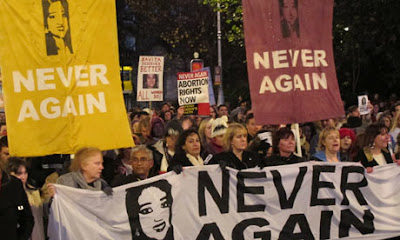 The death of Savita Halappanavar is a tragedy that became a catastrophe for her family – that much is crystal clear and pretty much everyone can agree on it. But then things get murkier and murkier. There are agendas at work and the hint of something rather nasty at large.

Mrs Halappanavar died of an antibiotic-resistant infection, specifically e.coli ESBL. She did not die from an abortion, from being denied an abortion, from Catholic teaching or from a confused legal system in Ireland.

ESBL stands for Extended Spectrum Beta-Lactamase positive gram negative bacteria. It is resistant to most strains of antibiotics. One of my informants told me: “… the antibiotics given were to no avail…two things can happen if it doesn't respond to treatment. Either the body's immune system deals with it in the normal way and wins or the bug defeats the immune system and the patient develops an overwhelming septicaemia, leading to septic shock. The kidneys start to fail and the blood pressure starts to fall.” They then go on and die – the mortality rate is massive.

The great concern – or what should be the concern – is that e.Coli ESBL and other antibiotic-resistant infections are now at large in the community. Previously, such things were limited to identifiably higher-risk areas: hospitals themselves; food processing (slaughterhouses in particular); and farms, where slurry is often used as a fertilizer. But Mrs Halappanavar was a dentist.

Instead of being concerned that untreatable infections are in the community as a whole and spreading, the debate has been hijacked by special-interest groups. But it is worse than that.

It is proving to be very difficult to get the truth of the fatal infection into the mainstream news media; they are only interested in the abortion angle – if they remain interested at all. As for the medics I have spoken to – they are all concerned for their careers. Getting information has been like pulling teeth. I cannot mention names or attribute their comments even to ‘a doctor/nurse/paramedic at x/y/z hospital/surgery/healthcare trust’. I can’t even mention the area they live and practice; they are frightened of being traced and found out. That could have been put down to the fear that they were passing on hearsay and gossip – but the same story has come from multiple sources. It passes the usual tests of corroboration.

FEAR MAKES FOOLS OF US ALL

I am getting a message pretty loud and clear that speaking out about this, that going public with the 'wrong' message may very well impact upon an individual's career. "Most people are afraid to comment..." one of my informants has said. Some of my informants are coming towards the end of their careers and are slightly more inclined to speak out but even then there is a great deal of caution. There appears to be real, tangible fear.

Is it a conspiracy? Well, in my experience, you don’t often find doctors and nurses so frightened for their jobs. Patient confidentiality is always respected, of course, but there is so much out in the open now that confidentiality is not an issue. It is odd – very odd – that the ‘pro-choice’ group whose press release triggered off this furore seems to have known about the incident for some days, had access to medical information that was not at the time in the public domain and was, therefore, supposedly confidential. It had the chance to tee up its members and supporters that a major story was about to break.

It happened shortly after a Marie Stopes facility opened in Northern Ireland, and soon after an RTE broadcast of an undercover investigation that revealed pregnancy advisory services are behaving in an illegal and dangerous manner. One of my informants has pointed out that the consultant in charge of the deceased lady is actually English and mentioned casually that it was unusual to see people coming in from the UK - that the traffic is usually the other way. "...it may be because she has an agenda", they said. They may be appallingly right. As someone said, there is a lot of money to be made from abortions, as the UK and US experience demonstrates.

The tragedy of Mrs Halappanavar and the ensuing fuss has arrived very conveniently to overwhelm the negative programme - who now remembers it at all - in a tide of prejudice, misinformation and lynch-mob hysteria.

I had to ask some rather distasteful questions to get to the truth and got some fleas in my ear for suggesting the possibility of racism or gender-selective illegally-procured abortion! And then the gates began to crack open, the information started to flow but the fear of my informants has become almost tangible. The enquiry looked like the sort of stitch-up from the old days; it was almost laughable. Now the widowed husband has got a lawyer and is involved in setting the terms of reference of the enquiry – which hasn’t even started yet. If his wishes are not abided by, then he will not allow his deceased wife’s records to be released. I hesitate before making this observation but, of course, if no-one is responsible, if it was a tragic death that was unpreventable, then some interests will be frustrated. There are interests in finding someone or something to blame. Which means that there will be horsetrading going on to make sure it lands in the ‘right’ place. As I said, if you can’t find evidence of a conspiracy then you aren’t looking hard enough.

GET THE MESSAGE OUT

A Doctor Clair, from Cork, has had the courage to speak out publicly, in the form of a letter to the Irish examiner that was published on Tuesday 20 November. He is almost alone at the moment but one hopes his letter will get wider publicity. Readers of this blog should disseminate it as widely as they can.