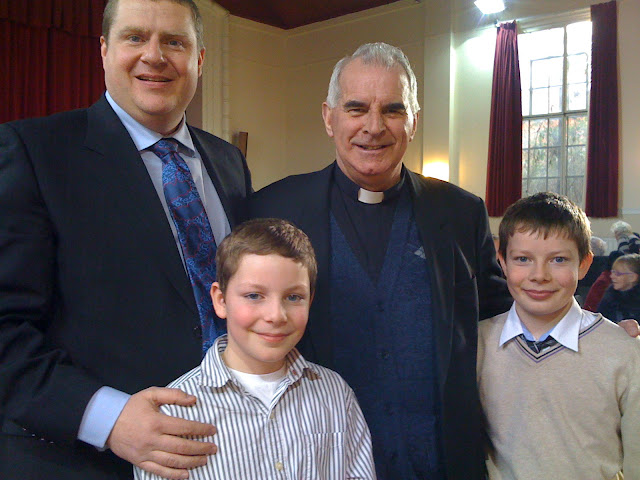 Following the allegations in Sunday's Observer newspaper that the Cardinal had acted inappropriately some thirty years ago, it has been announced this morning that the seventy-four year old, who is in poor health, is stepping down.

This feels like another blow to the Church. There will now be no representative from the U.K. in the Conclave.

The Holy Father Pope Benedict XVI has accepted on the 18 February 2013 the resignation of His Eminence Cardinal Keith Patrick O’Brien from the pastoral governance of the Archdiocese of Saint Andrews and Edinburgh. This information will be announced and published in the Osservatore Romano of Monday 25 February 2013.

The Cardinal had already presented last November his resignation in view of his 75th birthday on 17 March 2013, and it was accepted by the Holy Father with the formula 'nunc pro tunc' (now for later). Given the imminent Vacant See, the Holy Father has now decided to accept the said resignation definitively.

I have had the privilege of meeting the Cardinal and I have friends who are friends with him. They know him to be a good man. I did think—who of us has not some act thirty years or so in our past that we regret? Faith is a journey and the Church's message is one of metanoia; that we can change, by recognising we have sinned and asking for forgiveness and healing, by changing.

That's not to say that the Cardinal is guilty; one has to consider the strange timing of these allegations. Not when he was made Archbishop, or Cardinal, but now, at the beginning of February the allegations have been made. They are ethereal in substance and no one I know seems to know where they have come from or who has made the allegations.

I do know that my sons consider Cardinal Keith a bit of a hero and when the news came on about this William, my oldest son, turned to me with a look of betrayal in his eyes that said everything. This is how we all feel whenever someone lets us down. Of course, I reiterate, we do not know that Cardinal O'Brien has done anything inappropriate yet. We do know the allegations involve adults, not children and that he is a good man, without question. Of course this does not excuse him if he has abused his power relationship with some of his priests.

Reacting to the acceptance of his resignation, Cardinal O'Brien said;


"Approaching the age of seventy-five and at times in indifferent health, I tendered my resignation as Archbishop of Saint Andrews and Edinburgh to Pope Benedict XVI some months ago. I was happy to know that he accepted my resignation ‘nunc pro tunc’ – (now – but to take effect later) on 13 November 2012. The Holy Father has now decided that my resignation will take effect today, 25 February 2013, and that he will appoint an Apostolic Administrator to govern the Archdiocese in my place until my successor as Archbishop is appointed. In the meantime I will give every assistance to the Apostolic Administrator and to our new Archbishop, once he is appointed, as I prepare to move into retirement.
I have valued the opportunity of serving the people of Scotland and overseas in various ways since becoming a priest. Looking back over my years of ministry: For any good I have been able to do, I thank God. For any failures, I apologise to all whom I have offended
I thank Pope Benedict XVI for his kindness and courtesy to me and on my own behalf and on behalf of the people of Scotland, I wish him a long and happy retirement. I also ask God’s blessing on my brother Cardinals who will soon gather in Rome to elect his successor. I will not join them for this Conclave in person. I do not wish media attention in Rome to be focussed on me – but rather on Pope Benedict XVI and on his Successor. However, I will pray with them and for them that, enlightened by the Holy Spirit, they will make the correct choice for the future good of the Church.
May God who has blessed me so often in my ministry continue to bless and help me in the years which remain for me on earth and may he shower his blessings on all the peoples of Scotland especially those I was privileged to serve in a special way in the Archdiocese of Saint Andrews and Edinburgh."

I think this is very brave. I can't help but feel that the Cardinal is willing to take all this on himself to save the Church from any scandal. And one can imagine the media scrum surround the Cardinal at the airport etc, had he decided to attend, drawing attention away from what it should be focused on and feeding the frenzy for scandal and hypocrisy which is clearly mounting day by day at the moment. The wolves are certainly at the door in a way I have never seen before.

I doubt that there will ever be much clarity about what actually happened in this case. It is not an abuse of minors, so there will be no investigation. He has now retired and will undoubtedly keep a low profile from this moment on. Bearing in mind his recent standing up for the faith—against SSM and for marriage, one does wonder if he has made some vicious enemies?

I suppose all we can do is keep him in our thoughts and prayers and look forward to the Conclave with hope for renewal!