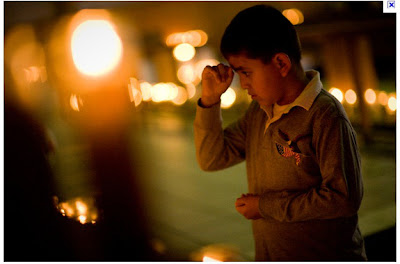 Further to my post a couple of days ago which considered the state of Catholic Education, and what (if anything) to do about it, Michael Merrick has pointed me to some very interesting comments of his own on the subject.

In his first post, he discusses a question which I have heard for some time now in Catholic circles: Is it right for our Mass-going population to continue to fund schools which are Catholic in name only? This question was bravely posited by the Rt. Rvd. Bishop Michael Campbell in a pastoral letter. Michael notes:


It is worth saying that, until relatively recently, this question would simply not have been asked, or at any rate not framed in such terms. Indeed, the very use of the words ‘Catholic in name only’ (or CINO in shorthand) is itself provocative for those who have not and do not necessarily see the role of Catholic schools as being ‘Catholic’ at all, at least not with a capital ‘C’. That the Church should compromise its generous access and influence within mainstream schools sector, and the (imagined?) political leverage that comes with it, was simply off the radar – better by far to bury the question with platitudes about Gospel values and the vital role Catholic schools play in some of the toughest communities (as they absolutely do, by the way). Questions of authenticity and mission, indeed of practice, were irrelevant; presence was the key.

This is interesting and I think I can see that in days when the secular agenda was less muscular and voiced by a minority in this country, it may have been possible to argue that the Catholicity of our schools could be something gently stated, an ethos that ran through the institution and rubbed off somehow on those receptive to it. I don’t think it’s a particularly convincing argument, but I can see that it is there, probably largely in the interests of keeping the majority happy and not causing a fuss. But have we not seen where that has led us and is leading us? The key term could be ‘apathy’. Parents, children and teachers are apathetic about the faith, seeing it as largely anachronistic, a throw-back to a less enlightened past, without ever understanding the nuanced and far-sighted arguments the Church consistently presents. Michael introduces the often forgotten dynamic of evangelisation at this point into the discussion, quoting the emeritus Bishop of Lancaster Patrick O’Donoghue who wrote on this issue leaving little room for doubt:

How alien this sounds! (would that it did not!). It seems to me that schools are necessarily pre-occupied with dealing with the constant external secular pressures thrust upon them that ideas like salvation and evangelisation are very far down the priorities indeed, and what a shame that this is the case. One thing I hear from teachers is that children do not learn their faith at home any more—well even more reason to teach it to them at school then surely? That way they can take it home and evangelise their parents.

Michael also teases out the vital question implicit in the Bishop’s statement: Should Catholic education really be just for Catholics? Should it not welcome and invite all to share in the community of faith? Or does open access make it more difficult for schools to cultivate a community of faith that people might be able to share in? My own thoughts are that it should, but not at the cost of its Catholicity. This is a misappropriation of the heritage of Vatican II. We should not have to relinquish our Catholicity, alter it, or water-it-down in order to open our arms to everyone. Such watered down ideology only serves to confuse young minds and relativise their understanding of what is important—of what has value—of what is sacred. It is utilitarianism, which will always fail to achieve what it intends to because by its very nature it collapses in on itself.

Retention of an objective understanding of reality is essential in teaching I would have thought. After all, we do not teach our children what we consider to be wrong. The purpose then, of a Catholic School is to educate young people within the context of the Catholic faith, thus producing balanced, compassionate and caring citizens who are educated in the faith to the point where they are capable of defending it. To me this means a solid grasp of the philosophical principles behind the teaching but also through our actions. A Catholic school should evoke that ethic of love and care in a way that is tangible throughout the school community. It strikes me that the pattern for this does broadly exist, what tends to be lacking is a Catholic minded faculty to make it a reality.

Education and formation are the same thing and this being the case, surely the staff profile is more important than the pupil profile when it comes to Catholicity? This is why I think we should start with supporting our teachers and helping them to better understand and feel confident defending the faith. If they have a vehicle to facilitate this growth in confidence, the nature of their vocation will provide the necessary ebullience to disseminate the doctrine effectively to the children.

In Michael’s follow up post, he asserts the important role of exam results and the pressure they assert on a Catholic ethic which may, in its essence, be more about the holistic approach that sees academic excellence as one desirable criterion of success among many. Michael suggests that this necessary reality results in a slide in the importance of more seemingly ephemeral principles like salvation or evangelisation, which (let’s face it) may not be considered a priority by many teachers next to the cold hard facts of everyday work, data and progress.

Part of the reason for this, suggests Michael, is the lack of coherent vision regarding the characteristics of a specifically Catholic education coming from the Church hierarchy. I have experienced this myself. When one stands up for the Church, one can find oneself a very lone voice. In order to succeed in their mission of formation and evangelisation, Catholic Schools need to be supported and encouraged by those bear the authority to most forcefully outline what that mission looks like. Can you see where this is going? Michael next looks at the effect this lack of support and clarity has on our schools:


This fundamental lack of confidence necessarily trickles down and shapes the way in which Catholic schools organise and constitute themselves. With regards the development of future Catholic teachers for Catholic schools, for example, it would be the exception rather than the norm for those coming through teacher training to be given any sort of depth discussion on what a Catholic education entails, or what extra commitments, or expectations, or demands come with teaching in a Catholic school. The process is, after all, delivered solely through the state, which has no concern in training teachers for Catholic schools, only in training teachers - the Catholicism bit is functionally irrelevant, perhaps something addressed in a one-hour presentation during induction should one ever get a job in a Catholic school, but in reality no more than a distraction to a process that always was solely about creating a teacher for the system, an individual who could work in any school, whether it be Catholic or community.

Even for those who develop a personal interest in answering the questions outlined above, and who seek to incorporate this into their role within the Catholic school system, it soon becomes obvious there is a dispiriting lack of sustained and coherent articulation regarding the nature of a Catholic education, save, perhaps, for certain impressive voices all too often hidden away within the halls of academia or at the bottom of little circulated publications. This relative lack of a public and rigorous debate on what a Catholic education entails, and the formation of staff in light of the conclusions such determinations bring, hinders those who instinctively feel the call to deliver an authentic Catholic education.

And so we are back to where we started. I am going to be bold and suggest that any change starts with the support of teachers to give them the confidence and enthusiasm to educate in a wholly Catholic environment. A Catholic School should be a school where the leadership, governors, parents and teachers all share a common set of values and ideals. Strong leadership should clearly articulate what those ideals and values are so that no one involved in that community is at all surprised when they are brought to the forefront of everything that takes place within that school community.
Academia academy apologetics Catholic Schools Catholicity community Education hierarchy intelligentsia society what makes a school Catholic