Back on April 29, 2009, Pope Benedict XVI did something rather striking, but which went largely unnoticed.

He stopped off in Aquila, Italy, and visited the tomb of an obscure medieval Pope named St. Celestine V (1215-1296). After a brief prayer, he left his pallium, the symbol of his own episcopal authority as Bishop of Rome, on top of Celestine's tomb!

Fifteen months later, on July 4, 2010, Benedict went out of his way again, this time to visit and pray in the cathedral of Sulmona, near Rome, before the relics of this same saint, Celestine V.

Few people, however, noticed at the time.

Only now, we may be gaining a better understanding of what it meant. These actions were probably more than pious acts. More likely, they were profound and symbolic gestures of a very personal nature, which conveyed a message that a Pope can hardly deliver any other way.

In the year 1294, this man (Fr. Pietro Angelerio), known by all as a devout and holy priest, was elected Pope, somewhat against his will, shortly before his 80th birthday (Ratzinger was 78 when he was elected Pope in 2005). Just five months later, after issuing a formal decree allowing popes to resign (or abdicate, like other rulers), Pope Celestine V exercised that right. And now Pope Benedict XVI has chosen to follow in the footsteps of this venerable model. 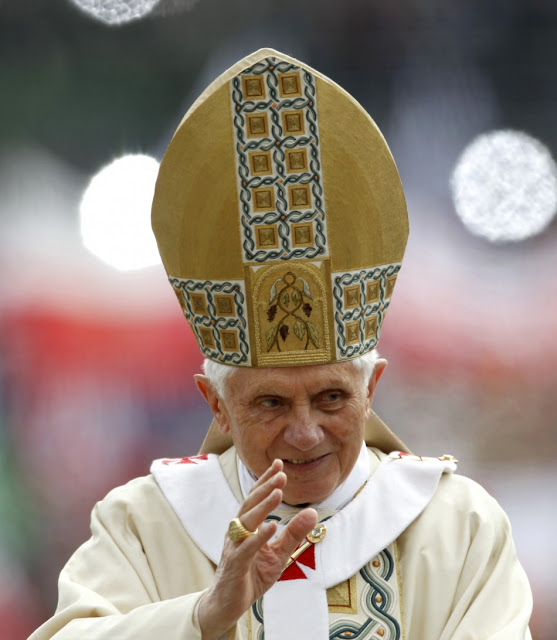