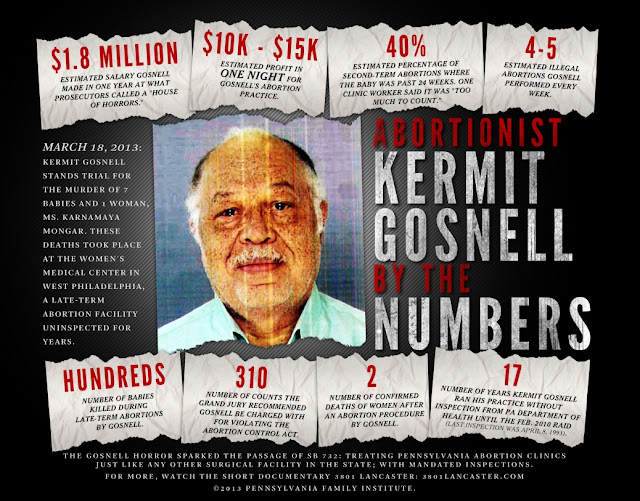 No idea what I'm talking about? Don't worry, you're not alone being in the dark on this one.

Yesterday the long dead, infamous Renaissance preacher, Girolamo Savonarola (@FraSavonarola),  self acclaimed denouncer of the exploitation of the poor, tweeted a link to a most shocking story on Twitter: 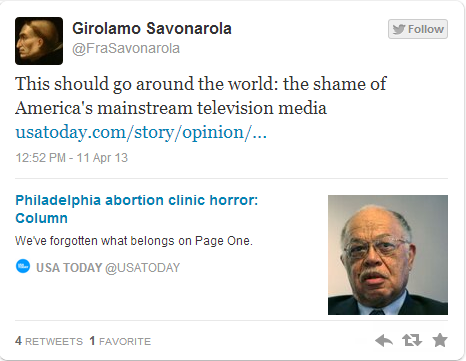 I was incredulous reading the gruesome details of the case. A man who routinely forced women who came to him into labor and then killed their babies. The specifics of the case are seven counts of first degree murder, where it is alleged live babies where born, and then executed with scissors by Gosnell. In addition, A pregnant refugee, Karnamaya Mongar, also died after being given too much anesthesia and pain medication during a 2009 abortion at his West Philadelphia clinic.

There are so many things to be upset about this case, not least among them, the fact that if convicted, Gosnell will face the death penalty, a fact which will no doubt cause great discomfort to pro-life advocates. There has been a concerted effort to get this story out on Twitter and via the blogasphere today. Mulier Fortis has an excellent article which hi-lights the irony of the coverage the Savita Halappanavar case received both here, in Ireland and in the USA. Fr. Ed Tomlinson does a good job of cataloguing the issues on his blog (though I would urge you not to click on the link of the baby murdered with scissors there, such images have a way of burning their way into your brain). Besides the obvious, disgusting, visceral, murderous reality of what this man has done (for what he has done appears not to be in question, just the semantics of how we account for his actions), there is a racial angle, where Gosnell's lawyer is accusing officials of a 'racist prosecution' against his client 'who gave back to the poor people of Philadelphia'. Also the fact that his untrained and unlicensed assistants were desperate for work. Most of the women and babies were of a lower socio-economic class and of black/ethnic minority, and a report said that white women were offered cleaner rooms.

Yet despite all this, and that disproportionately high rate of abortions among African-Americans is a very sensitive topic in the states, almost the most astonishing fact about this case is that it has only been covered on USA Today and here by the Daily Mail alone. Despite this Twitter is alight with discussion on it and the tag #Gosnell is trending constantly. Usually, Twitter is about what is in the news, usually the best place to find out first, but in this case it seems the mainstream media are not willing to report on this case. As Kirsten Powers of USA Today put it:


Infant beheadings. Severed baby feet in jars. A child screaming after it was delivered alive during an abortion procedure. Haven't heard about these sickening accusations?
It's not your fault. Since the murder trial of Pennsylvania abortion doctor Kermit Gosnell began March 18, there has been precious little coverage of the case that should be on every news show and front page. The revolting revelations of Gosnell's former staff, who have been testifying to what they witnessed and did during late-term abortions, should shock anyone with a heart.

Why is this not being reported? Does it speak against a narrative that doesn't suit a large swathe of liberal agenda? When one considers the attention given to the Philpott case, you have to wonder why practically no one in the USA or here is saying anything about this?

Of course the late term abortion work being carried out by Gosnell is a measure constantly advocated and voted for by President Obama.

Personally, As the depth of the atrocities are catalogued, I am feeling increasingly devastated for the mothers who are hearing what went on in his clinic. I also feel utterly furious that this can happen, and that people could take part in this and consider that it was somehow morally licit. Note from the (albeit very few) reports how carefully the terminology is argued over. These are not 'abortions', Gosnell is being tried for 'murder'. Surely the difference is simply geography? It is clear that our nature is shocked by these crimes, yet we seek to sanitise what is really going on by means of our language.

The fact is, this constitutes yet another demonstration of the necessity of an objective morality. This is simply because, once you destroy the concept of the sanctity of human life, anything can be tolerated including murder of babies.