It appears I was not alone in feeling somewhat dismayed at reading the man who pretends to be the bishop of Salisbury's letter to Lord Alli of Norbury in the Telegraph. I was made aware of the existence of this letter by Peter Tatchell on Twitter who put it as follows: 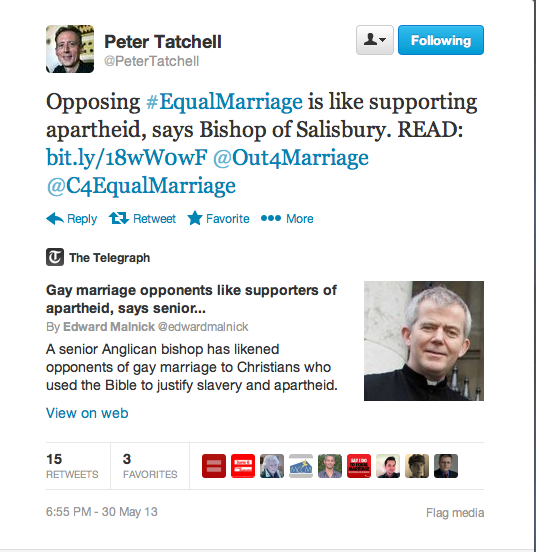 Perhaps it is too obvious to even point out, but clearly Peter is disinterested in the integrity of what people say as long as what they say supports his skewed view of the world. Let me explain:

It seems, in a tour de force of relativism, The 'Bishop' of Salisbury, the Rt Rev Nicholas Holtam, suggested Christians should “rethink” their interpretation of Scripture in light of changing attitudes towards homosexuality in society.

In a strongly worded intervention as members of the House of Lords prepare to debate the Government’s draft legislation introducing gay marriage, Bishop Holtam told peers that allowing gay couples to wed would be a “very strong endorsement” of the institution of marriage.

Bishop Holtam previously opposed gay marriage, but is now the only diocesan bishop in the country to publicly favour the proposed new law.

In a letter sent to Lord Alli, a gay Muslim peer, and published in The Daily Telegraph, Bishop Holtam distanced himself from the Church of England’s official opposition to same-sex marriage, saying: “Christian morality comes from the mix of Bible, Christian tradition and our reasoned experience.

“Sometimes Christians have had to rethink the priorities of the Gospel in the light of experience."

Rethink? Re-write more like it! The Bible, is unequivocal on the issue, and I'm not just talking about the Old Testament stuff we're always accused of picking and choosing about by those who don't understand the difference between moral law and the civil law, I'm talking about the nice, fluffy, New Testament too! The teaching is clear for Catholics, particularly in this Vatican document which gives a solid broad view of the Scriptural pericope. But surely this is more important for Christians who claim the Bible as their sole source of authority in opposition to the successor of St. Peter?

Nicholas Holtam's letter contains a raft of ill informed, ignorant nonsense that frankly demonstrates perfectly why, in the hands of such 'leaders', this country is lost to the faith.

The wonderful Fr. Alexander Lucie-Smith was straight onto this and posted this great blog in the Catholic Herald today:

The Anglican Bishop of Salisbury has written a letter in the Daily Telegraph about gay marriage, which can be read here if you feel you really want to. Embedded in the letter the Bishop has this to say:

“For example, before Wilberforce, Christians saw slavery as Biblical and part of the God-given ordering of Creation.”

Interesting, eh? Wilberforce, one assumes he means William Wilberforce, was born in 1759 and died in 1833. So, for seventeen centuries all was darkness until Wilberforce came along and put us all right on the matter.

This will come as major news to Pope Pius II who condemned slavery as a great crime and who died in 1464. The same is true of Popes Paul III, Urban VIII, and Benedict XIV, all of whom long predated the English reformer, not to mention the founders and members of the Mercedarian and Trinitarian Orders, which were dedicated to the redemption of slaves.

In fact the history of Christian anti-slavery is a long one, as this useful article makes clear.

Perhaps we should not expect the Bishop of Salisbury to know much about any of the people above; after all, they were all Roman Catholics and foreigners, and thus, one assumes, beneath his notice. But when someone makes such an ignorant remark, whoever he may be, it is worth protesting, simply because if such ignorant remarks go unchallenged, then they may well pass into the mainstream and poison the minds of future generations.

Slavery is a great evil, but it is simplistic, misleading and dangerous to see it as something that flourished because of the Bible or because Christians approved it.

I hope you will agree he makes some excellent points there.

The Journalist Ruari McCallion who has posted here before has responded with this very well written letter:


I have written to His Grace. You may wish to do the same.
what did I say?
As follows: (Mrs Brisbane is his secretary)

Could you advise His Grace, the Bishop of Salisbury, that someone is making a fool of him in public, ascribing to him opinions and ideas about slavery that are at such complete variance with the truth as to be completely laughable. One cannot for a moment believe that His Grace failed to pay any attention to the History of the Church during his studies and would therefore be unaware that the Church outlawed slavery of Christians as long ago as the 8th Century, that Pope Eugene in the 1430s threatened the Spanish with excommunication if they did not immediately free the slaves they had taken in the Canary Islands, that Pope Paul III made several pronouncements against slavery in the 16th Century and that even the somewhat misnamed Pope Innocent VIII upheld the injunction against slavery, in word if not entirely in deed.

I am sure His Grace is too familiar with St Thomas Aquinas' teachings, which condemned slavery and serfdom as in opposition to the Natural Law, to fall into the trap of thinking that the anti-slavery movement began with William Wilberforce, outstanding person though he was, and that mainstream Christianity somehow accepted slavery as Biblical before the eminent Quakers came along at the dawn of Modern Europe.

The wretched imposter who wrote to the Daily Telegraph in the Bishop's name even seemed to imply that Apartheid in South Africa was supported by anything other than a bunch of ignorant racists. He could perhaps give his colleague, Desmond Tutu, a call, and just bring himself absolutely up to date on the decades-long struggle of the mainstream Christian churches in South Africa against Apartheid – a struggle carried out at great personal risk to ordinary people, clerics and senior clergy alike, and including Bp Tutu. One would not like to think of His Grace being caught out in any factual error by this charlatan, as and when he finds out who he is.

Should it actually be His Grace who has come out with this nonsense, perhaps in an unguarded moment or under the influence of too much wine, then I am sure that Christians across the nation – even Daily Telegraph readers – could be encouraged to make allowances.

What they might not be quite so willing to give latitude on is failure to understand the concepts of democracy, 'democratic mandate' and the absence thereof in the current discussion. This time, it may be something that His Grace agrees with that is being forced through without any true democratic discussion and mandate. Next time, it might be something he profoundly disagrees with. Having supported the travesty once, on what basis would he oppose the same process in the future?

He should also be cautious of placing too much faith in the promises of princes and the efficacy of 'legal safeguards', given the experience with equalities legislation over the past several years. If it was indeed His Grace who wrote the letter to the Telegraph, he has made himself look woefully uninformed, I am afraid. The History of the Church is part of the living essence of the Church and his ignorance of it is rather disturbing. I hope that he will not continue to make himself look silly by seeking to defend an indefensible position.
(Just by-the-by – my understanding of the Sacrament of Marriage was that the participants should be OPEN TO the gift of children, whatever their age. So yes, throughout history and millennia before the Church came into existence, children and procreation have been at the core of marriage – indeed, they are what it has always been about.)
This link might be helpful in beginning to fill in those apparent gaps in his knowledge.


In short, 'nuff said, or, more eruditely, perhaps one should inform Nicholas Holtam of the final line from Wittgenstein's Tractatus Logico-Philosophicus:

Whereof one cannot speak, thereof one must be silent.