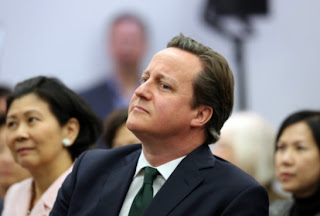 So Parliament turns its attention once more this week to the now infamous Same Sex Marriage Bill. The Tory Party themselves are now citing this Bill as one of several issues which constitute a growing crisis which threatens to destroy the Party from within.

Bob Woollard, chairman of Conservative Grassroots, also told the BBC the same-sex marriage bill had "upset countless people and caused many, many people - hundreds, maybe thousands, to leave the party over this issue".

The Party deals with this by simply jumping on the national band wagon of Liberal Fascism and labelling people with such views as bigots (a la Nick Clegg) or "swivel-eyed loons" as was reportedly commented by one senior Tory. Indeed, the rejection of Tim Loughton's amendment last night demonstrates that this has always been about enforcing conformity not equality. I have spent a lot of time pondering, and worrying over this. I have written quite a bit about it here, for example this dealing with the 'bigot' accusation. This is because I don't want to be a bigot, or prejudiced in any way, yet I remain fundamentally uneasy and thus opposed to 'gay marriage'.

The argument regularly trotted out seems to me to be a serious over-simplification of the issue, which stresses the importance of happiness, and the imbalance of allowing loving couples of opposite sex to call their commitment marriage, whilst cruelly denying this same right to couple of the same gender.

And yet, even supporters of the left with sufficient intellect can see that this isn't simply the case that if you don't agree with the gay mafia agenda, you're a bigot. Sarah Teather has spoken eloquently on the subject and Mehdi Hasan wrote in The New Statesman today:


I’m a progressive who supports a secular society in which you don’t impose your faith on others – and in which the government, no matter how big or small, must always stay out of the bedroom. But I am also (to Richard Dawkins’s continuing disappointment) a believing Muslim. And, as a result, I really do struggle with this issue of homosexuality. As a supporter of secularism, I am willing to accept same-sex weddings in a state-sanctioned register office, on grounds of equity. As a believer in Islam, however, I insist that no mosque be forced to hold one against its wishes.

To me the idea of Same Sex Marriage conflates two important and separate ideas and despoils the unique nature of the commitment being married makes to children and family. Fundamentally, widespread social acceptance of this idea demonstrates the extent to which we have uncoupled procreation from marriage. In moving to a definition of marriage that no longer requires sexual difference, we will, over time, ultimately decouple the definition of marriage from family life altogether. I doubt that this change will be immediate. It will be gradual, as perceptions of what marriage is and is for shift. But we can already see the foundations for this shift in the debate about same-sex marriage. Those who argue for a change in the law do so by saying that surely marriage is just about love between two people and so is of nobody else’s business. Once the concept of marriage has become established in social consciousness as an entirely private matter about love and commitment alone, without any link to family, I fear that it will accelerate changes already occurring that makes family life more unstable.

Perhaps the change is now inevitable. Brought about by individualism, our losing sight of an integrated social context, and our desire to justify any sort of behaviour we care to indulge in. Don't judge us. It's none of your business. Who says we can't? There IS no objective reality.

CCFather deals very well I think, with some of the fundamental areas of conflict between our respect for homosexual persons and our rejection of homosexual activity here.

One particular issue for me has been the way in which this will conflict with the whole idea of faith schools. Michael Merrick has written very well on the issue here.

...what does this mean for Joanne who, asked to write an essay in her Religious Studies exam on the nature of marriage, expresses the view that marriage is the monogamous union of one man and one woman? Or for Ruth, who explains that marriage is sacramental and can only ever possibly be between a man and woman, that ‘gay marriage’ is not even possible? Or for Aisha, arguing that one fundamental purpose of marriage is procreation, something that cannot naturally be achieved between two people of the same sex?Will these children have the confidence in their freedom to make such a case? Or will they, knowing that such views have already been declared anathema, change the nature of their responses, to meekly accept conformity of thought, even if only temporarily, through fear that the merits of any ‘bigoted’ answer will not be given the kind of recognition that would lead to a good grade?

Having written on behalf of our school to our PM, the response received was deeply concerning and confirmed that teaching Catholic Marriage in our schools will result in a fundamental conflict with the law, once the legislation is in. Michael offers his reflections in the context of a polemic which displays...


the peculiar attitudes of that zealous tribe who brook no opposition to the ‘gay marriage’ cause. For them, the issue is black and white and permits no discussion. They do not seek to understand the viewpoints of their opponents, any more than they seek to explain the logic of their own.

Ultimately, those of us who hold and teach a traditional understanding of marriage can surely expect to be marginalised, our views considered bigoted and subject to control by means of anti-hate laws. Being 'openly' Christian will result in your exclusion from professions like teaching, nursing, being a doctor or, bizarrely  a church leader! I don't think legislators will consider this any kind of marginalisation or role reversal, however. I think they will see it as right-minded, improvement of societal values and the development of anti-discrimination ethos in our society. Ironically this will complete miss the difference between equality and reality and we will be picking up the pieces for decades.
Conservative David Cameron gay Christian gay equality Gay marriage liberal fascism Nick Clegg swivel eyed loons Tim Loughton Tory