Speaking Out on Faith

Lou & I had a lovely surprise this week when some friends contacted us to let us know that our second son, Michael, was featured in the local newspaper. The report was about a local public speaking competition which Mike had been representing his school at the finals of.

His teacher had this to say about his performance:

Michael Lambert performed admirably well in the Jack Petchey public speaking regional finals, delivering a very passionate and moving speech about his faith. It was great to hear such a powerful Catholic message delivered so eloquently by one of our pupils. While he did not get through to the national finals, many people congratulated him and even said he should have won! —Mr P Griffin.

The Foundation exists to raise the aspirations of young people, to help them take advantage of opportunities and play a full part in society.


The Foundation sponsors the ‘Jack Petchey's Speak Out Challenge!’ a public speaking competition run by Speakers Trust in schools throughout London and Essex. It is the largest speaking competition for young people in the world; over 70,000 year 10 students from 32 boroughs in London and 14 districts in Essex have now participated in the challenge.

The students have the opportunity to talk openly and honestly on any subject they feel strongly about. Every student receives up to six hours of training in the skills of public speaking and effective communication from professional trainers.

We were really proud that Mike made it through to the finals. I was a bit shocked at his choice of subject matter, but through the rounds, he spoke with passion and confidence. He didn't win, falling foul of the strict time limits in the end, but he was contacted by several people who were very impressed by his speech. This letter was sent to his Head Teacher: 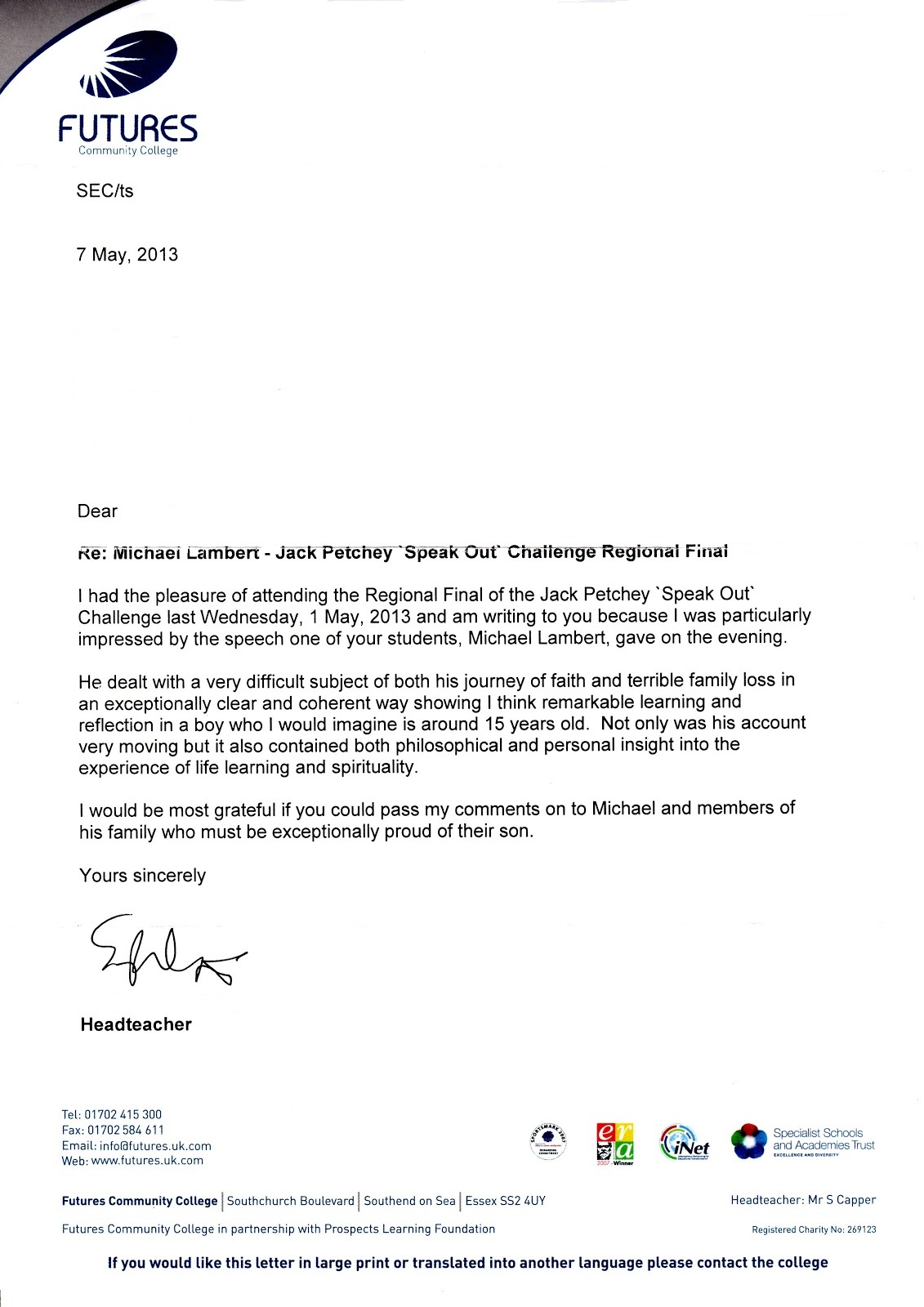 This is Mike's speech:

Faith. What is Faith? In a society filled with recession, terrorist fears and celebrity idolisation; what does it mean for a young person, any person, to have Faith? I would like to tell you all a story about my journey of Faith.

During the summer of 2009 my father bought a new car, something he had always aspired to do. My two brothers, my sister and I were terribly excited and naturally we argued over who would get the first ride. Within a week or so of owning the car everyone had been in for a ride, everyone except my little sister Ruth. No one really thought much about the situation so no one really thought it mattered when my sister went with my father for a ride one evening after dinner. It wasn’t long later however that my older brother William and I heard screams coming from down the hallway. We ran to find out what was happening, the screams were coming from my mother, she was on the phone to my father, the car had crashed… and my sister was dead.

The period after the crash was incredibly hard for my family, more so for my father who was driving the car and somehow managed to survive. He had trouble sleeping, one night he managed to drift off to sleep and in his dream he was visited by my sister. When she spoke to him she told him not to worry about her, that she was safe with God and that most importantly to have Faith in God that everything would turn out well. Looking back on all that has happened, Faith saved my family, we leant on each other and clung to God.

Albert Einstein once said – “There are two ways to live your life, one is as though nothing is a miracle, the other is as though everything is a miracle.” There are many miracles that occurred to my family, the recent (and significant) having happened in October 2011. My family were on holiday in Gozo, an island just off the coast of Malta. In Gozo there is a church called the shrine of our lady of Ta' Pinu. At the back of this church there is an Altar and a chance to write petitions to be offered up in prayer. My family all knelt and prayed but my mother and father proceeded to write petitions and leave them by the altar. It was a wonderful experience but it was never mentioned again… that is until three months later at Christmas 2011. My family had just set off for a walk when my mother and father turned to my brother and I and announced that we were to have a new brother or sister; we were absolutely astounded by the news and so happy for our parents. Later that evening sat around the fire talking about baby names and dates etc. my mother and father told me that at the shrine of Ta' Pinu, they had both prayed to Our Lady to bless our family with another child… Coincidence? I’ll let you decide.

On the 27th of July 2012, baby Mary Therese Lambert was born into the world. She has brought so much joy to so many people and we continue to cherish our every moment with her. I would like to leave you with some last words, “Without the darkness, there can be no light!”