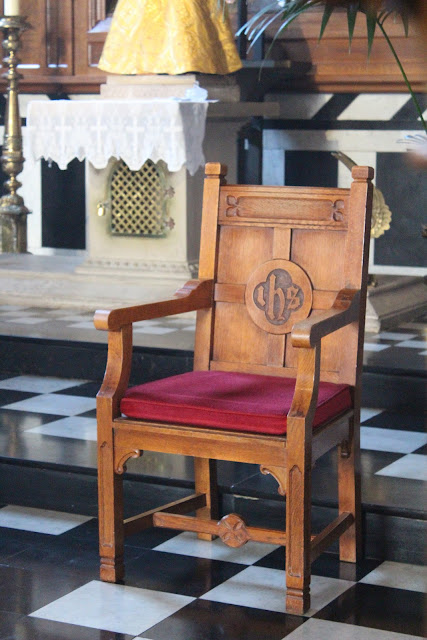 This post is dedicated to Amy, Catherine and Andy, who collared me after Mass this morning to ask me what the IHS meant on the seat Father sits in on the Sanctuary means (the actual seat is pictured above). I have to say it caught me a bit on the hop, but I figured it was probably the first, third and last letter of 'Jesus' in Greek. I promised to check and confirm it for them later, so here is a definitive answer from the Catholic Encyclopedia:

A monogram of the name of Jesus Christ. From the third century the names of our Saviour are sometimes shortened, particularly in Christian inscriptions (IH and XP, for Jesus and Christus). In the next century the "sigla" (chi-rho) occurs not only as an abbreviation but also as a symbol. From the beginning, however, in Christian inscriptions the nomina sacra, or names of Jesus Christ, were shortened by contraction, thus IC and XC or IHS and XPS for Iesous Christos. These Greek monograms continued to be used in Latin during theMiddle Ages. Eventually the right meaning was lost, and erroneous interpretation of IHS led to the faulty orthography "Jhesus". In Latin the learned abbreviation IHC rarely occurs after the Carlovingian era. The monogram became more popular after the twelfth century when St. Bernard insisted much on devotion to the Holy Name of Jesus, and the fourteenth, when the founder of the Jesuati, Blessed John Colombini (d. 1367), usually wore it on his breast. Towards the close of the Middle Ages IHS became a symbol, quite like the chi-rho in the Constantinian period. Sometimes above the H appears a cross and underneath three nails, while the whole figure is surrounded by rays. IHS became the accepted iconographical characteristic of St. VincentFerrer (d. 1419) and of St. Bernardine of Siena (d. 1444). The latter holy missionary, at the end of his sermons, was wont to exhibit this monogram devoutly to his audience, for which some blamed him; he was even called before Martin V. St. Ignatius of Loyola adopted the monogram in his seal as general of the Society of Jesus (1541), and thus it became the emblem of his institute. IHS was sometimes wrongly understood as "Jesus Hominum (or Hierosolymae) Salvator", i.e. Jesus, the Saviour of men (or of Jerusalem=Hierosolyma).