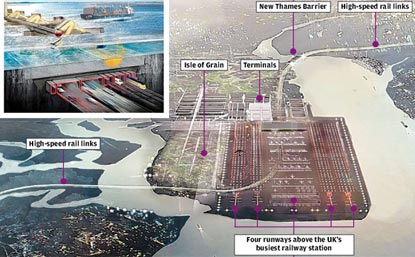 So yesterday, the Mayor of London, Boris Johnson, put forward three proposals to increase airport capacity including a four-runway hub on an artificial island in the Thames Estuary, previously dubbed Boris Island.

He also proposed a hub on the Isle of Grain in Kent or expanding Stansted Airport. Today Heathrow Airport has unveiled three options for a new runway, saying each one would be "quicker and cheaper" than plans for a rival hub airport.

I think Boris' plans are just what the country needs and would throw my weight behind it whole-heartedly. I think one of the biggest problem with Heathrow has always been road infrastructure. It is very risky travelling to Heathrow on the busiest stretch of the M25, which is often congested. Everyone I know builds in extra time for delays whenever they fly from Heathrow, and even then the pitiful tales of missed flights due to traffic jams are plentiful. By contrast, the Isle of Grain has the necessary transport links largely in place, and, with the new Thames crossing in the offing, some joined up thinking could result in a seriously prestigious delivered project here. I think this sort of project is an opportunity to showcase British engineering and architectural talent and it's frankly about time we grabbed the bull by the horns and did more stuff like this. It creates international demand for British expertise and creates a buzz about the country, whilst adding to the economy as a whole. 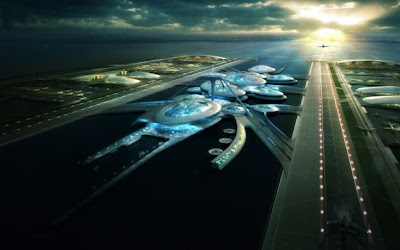 Grain has low population and good infrastructure at the moment. The Estuary location would mean little fall-out from noise pollution. In terms of environmental impact, the only thing on Grain currently is a dirty great CHP Power Station! I think the view from Leigh & Southend of huge jets taking off and landing in the Estuary, especially at night, would be dramatic and beautiful. The build would showcase UK engineering skills, whilst constituting investment in infrastructure which would boost the UK economy, bringing jobs both in the short term and in the long term.

This location is also very close to The City, and is between London and Dover, which presents opportunities for high speed rail links to France. Would it be quicker for French travelers from Calais or Bolougne to jump on a train and travel to Grain than an internal airport? Irrespective, joined up thinking could develop our strategic links via the Chunnel, and with HS1. I can't see a negative to this idea. It is exciting and innovative and I really do think we should get behind it and see if we can't build an airport the country can be really proud of, and the world will be jealous off instead of just continuing to tinker around with Heathrow.
Airport Boris Island Boris Johnson Essex Isle of Grain London Mayor of London Thames Estuary