Historical Synopsis of the Reception of Holy Communion 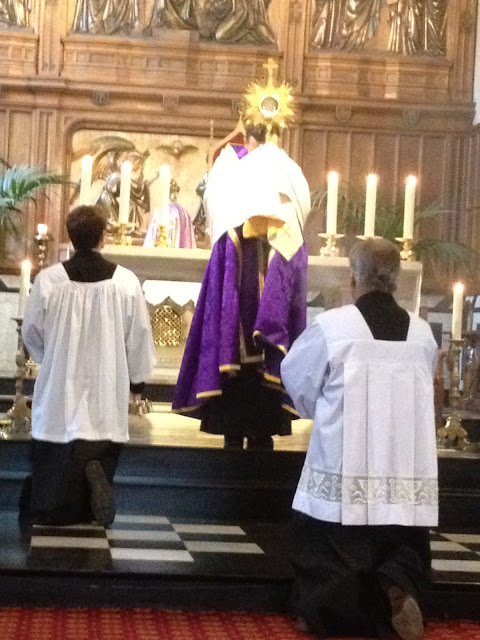 I spotted this excellent article by Catherine Bauer on Catholic Insight. It gives a brilliant synopsis of the history of the introduction of the reception of Communion in the hand as follows (emphasis mine):


Since the practice of Communion in the hand has become the common observance in most countries, there has been, whether you like to admit it or not, a spike in Eucharistic abuse. Communion in the hand has given those who wish to do harm and those who are careless the opportunity to do what they want with the Body of Christ. Unfortunately, the situation described above is not uncommon. In fact, it’s quite the opposite.

Furthermore, Communion in the hand has the potential to promote or at least foster a disrespect for the Body of Christ. As Catholics, we believe this small Host does not represent Christ, but is Christ Himself. How can we, then, possibly touch the living presence of God with our bare, dirty, unconsecrated, and unworthy hands? How? How have we even considered this as an option in the first place?

The answer can be given using one word: disobedience. The practice came about in the early 1960s (after Vatican II, though the Council never actually called for it), when certain parishes around the world began to disobey the Church’s rule of receiving the Host on the tongue, making their own rules as to whether or not you could receive in the hand. The Vatican immediately responded in disapproving words, saying that this disobedient practice would lead to “the possibility of a lessening of reverence toward the august sacrament of the altar, its profanation, and the watering down of the true doctrine of the Eucharist” (Memoriale Domini).

When Pope Paul VI in 1968 sent out a questionnaire to every bishop in the world asking if the Church should alter how Communion was being distributed, the answer came back loud and clear: in the hand was overwhelmingly disapproved of and should not be allowed. The Vatican agreed, stating that if the practice of Communion in the hand be allowed, “it would be an offense to the sensibilities and spiritual outlook of these bishops and a great many of the faithful” (Memoriale Domini).

Unfortunately, the practice continued to be promulgated by parishes and dioceses alike, most especially in France. So, in 1969, Paul VI granted the French bishops an indult—a special permission (not a norm)—to decide the question on their own. What happened next was an abuse of that indult: parishes around the world took advantage and permitted the practice of Communion in the hand. Despite the Vatican’s best efforts, the disobedience continued and today, most Catholics are under the erroneous idea that Communion in the hand is the norm, because it is seemingly most common. However, the norm does not mean the most common, but instead is the practice which is supported by the Universal Church and to which the laity should be adhering.

Read the article in its entireity here.

A lot of people, who receive Communion in the hand, and are devout, loving, passionate Catholics, find this difficult, perhaps even offensive, but I think it is an issue that we have to address. As Cardinal Newman correctly observed that "a developed doctrine which reverses the course of development which has preceded it, is no true development but a corruption; also that what is corrupt acts as an element of unhealthiness towards what is sound."

There could be no more accurate description of the nature and effect of the reversal of development which has occurred with the introduction of Communion in the hand.

In the ancient liturgy of St. James, there is a passage which expresses perfectly the attitude which we should adopt in the presence of the Paschal mystery, an attitude epitomised perfectly by the manner in which Mass was celebrated by the close of the ninth century, but which is found totally deplorable by today's proponents of Communion in the hand. The passage reads:


"Let all mortal flesh be silent, and stand with fear and trembling, and meditate nothing earthly within itself for the King of kings and Lord of lords, Christ our God, comes forward to be sacrificed, and to be given for food to the faithful; and the bands of Angels go before Him with every power and dominion, the many-eyed cherubim, and the six-winged seraphim, covering their faces, and crying aloud the hymn, Alleluia, Alleluia, Alleluia. " 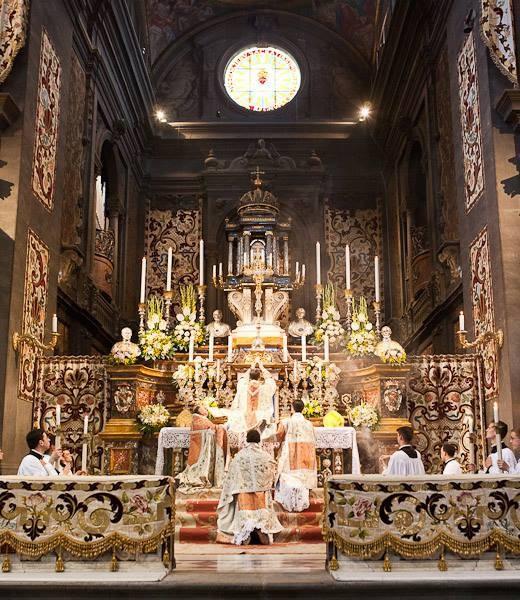 If we love the Church and what She stands for, we should all be concerned about the evident decline of belief and faith among Catholics.

It might sound extraordinary, but the facts and figures demonstrate that this has been spiraling downward ever since the introduction of Communion in the hand in 1969. Dr. Joseph Shaw confirms this fact in a far more statistical analysis than my one here.

What started out as disobedience among a few select bishops in Belgium in the 1960’s, has now been spread like wildfire among the average Catholic worldwide, in what is largely known in the Catholic world as a third rail topic.

There is widespread confusion as to how this can be a disobedient act when it has been approved by the Church.

However, the facts are that Communion on the tongue is still the law of the Church, while Communion in the hand is an exception to the law allowed by an indult, which was granted with severe reservations by Pope Paul VI in his encyclical letter Memoriale Domini.

Fr. Matthias Gaudron explains how this happened in his book The Cathechism of the Crisis in the Church,

“Communion in the hand was first practiced without any authorisation in a few very progressive groups against the explicit rules of the Church.”

“On May 29, 1969, the Instruction Memoriale Domini took cognizance of this disobedience and reiterated in detail the advantages of Communion on the tongue”.

Fr. Gaudron explains that after a survey was given to the bishops about whether not they would be in support of introducing Communion in the hand, 58% opposed it, and only 27% were in favor of it. The outcome of this practice has resulted in a great deal of damage being done to the belief of the Real Presence of Christ in the Eucharist because the average Catholic will observe the reverence and respect others show and act in accordance with the majority. When we all show great reverence and respect for the blessed Sacrament, it can only serve to foster greater love and reverence among all the congregation. It shows that it actually means something important, and what could be more important than receiving the LORD Himself?

A gallop poll taken only a few years ago, the results of which were referenced in the Remnant Newspaper, indicates that just 30% of U.S. Catholics now believe in the Real Presence. The remaining 70% did not, and their belief system was sprinkled with an odd mixture of Protestant belief and Catholic Theology, or they simply had no understanding of authentic Catholic teaching.

There is a faction of progressive Catholics who either knowingly or unknowingly obscure the facts of history. They mistakenly believe that they are returning to the ancient practice of the early Christians. But the facts show that this simply isn't the case. It is true that Holy Communion in the hand did indeed happen. However, when we read the Early Church Fathers we discover the reasons for why Holy Communion in the hand was allowed. It was only tolerated during times of Church persecution.

Dr. Taylor Marshall has researched this subject and reports that Saint Basil had this to say on this subject:

“Communion in the hand is allowed only in two instances, 1) under times of persecution where no priest is present, 2) for hermits and ascetics in the wilderness who do not have priests.”

This point needs to be stressed; it was a rare exception, and not the norm. Otherwise, according to Saint Basil, to receive Communion in the hand was considered a "grave immoderation” under normal circumstances. This practice goes way back in Church history. One of the earliest references we have about it is from Pope St. Sixtus I, who reigned from 115-125 AD, "it is prohibited for the faithful to even touch the sacred vessels, or receive in the hand". Saint Paul himself mentions the importance of the Eucharist repeatedly in the scriptures and how one should not approach it unworthily in 1 Corinthians 10 & 11.

If you are interested in the Early Church Father's attitude to Communion, and the Patristic argument for Communion in the hand, I have posted a more detailed discussion here.