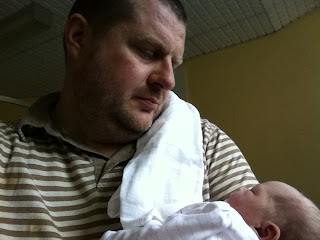 Right, now I have your attention...

Caroline Farrow has written a really interesting reflection on the Catholic theology of the family and fertility.

It raises many important points which will resonate with Catholics who are in engaged in the melee of family life. For example, the term Natural Family Planning could have negative connotations with contraceptive over-tones. Indeed, it is a fact that such secular institutions as the NHS and the BBC both refer to NFP as a method of contraception. Caroline points out that some non-Catholics consider that NFP is a method of contraception and to say it is not is merely to enagage in semantics.

Of course, Catholics argue that there is nothing in any way contraceptive about natural family planning because a couple practicing NFP do nothing at all to prevent procreation or to render the act infertile either before, during, or after sexual intercourse has taken place . The sexual act may in fact be infertile (i.e. it may not be possible for the woman to conceive at that time), but the couple has not done anything to make the act infertile.

The Church is pretty clear on this point, see n.16 of Humanae Vitae for further clarification.


“Neither the Church nor her doctrine is inconsistent when she considers it lawful for married people to take advantage of the infertile period but condemns as always unlawful the use of means which directly prevent conception […]. In reality, these two cases are completely different.” (HV 16)

I.E. natural family planning and contraception are completely different. I think the main difference is that Catholic teaching is fundamentally about consequences. Catholics teach that sex = babies. Our actions have consequences, so don't engage in risk taking activity unless you are prepared to engage with the consequences. Yes there are human methods available which attempt to mitigate those consequences, but ultimately you may be surprised to find that life generally does find a way!

I think Caroline is spot on with regard to the lack of teaching, which is the main problem. Put simply, it needs to be understood in synthesis with the whole of Catholic moral theology rather than in isolation and we should try and pass it on in that context. It is getting heard more, but I think this is probably because young, faithful Catholics are finding out about it and starting to do what the Church teaches for themselves

Also what comes across from Caroline's piece is the spiritual dimension, which I think we all struggle with in an issue which has such important ramifications as this one. At what point do we 'let go and let God', and at which point do we have to be realistic and take control of our own destinies? The Church teaching, very correctly quoted by Caroline almost seems to be asking us to do both things. How can young Catholics swamped by secular culture be expected to even begin to understand such nuanced teaching without thorough grounding and catechesis?

I also think the theology of the body isn't complete, it needs further development. Interesting comments on the issue here


"...most Catholic evangelists don't engage with young people. When they talk about sexuality, they'll just give them a hand-out with the Church's teaching. They just touch the surface. We explain to them how we live this out, how we have learned, often by bitter experience, that the Church's teaching is life-giving. You have to be up-front and challenging so that they see we have a lived faith. We are witnesses to the Gospel and there has to be proclamation in what we do. The response is phenomenal. At the beginning of a discussion about sexuality, 100 per cent of them will say that the Church's teaching is wrong. By the end most of them will say they're not too sure."

I think this is spot on and really hits the nail on the head (despite a closing sentence which doesn't seem overly positive!). We're just not teaching this, and I really do hope people will start engaging with it (one of the reasons for bothering to write this blog post).

Another aspect I feel Caroline raises is the secular meme that we are in fact a 'human virus', over-populating the world and heading for disaster as we consume the world's resources like locusts. Caroline quotes JP II on family size thus:


To create a family means to create a community, since the family is a social unit or else it is not a family. To be a community it must have a certain size. This is most obvious in the context of education. For the family is an educational institution within the framework of which the personality of a new human being is formed. If it is to be correctly formed it is very important that this human being should not be alone, but surrounded by a natural community. We are sometimes told that it is easier to bring up several children together than an only child, and also that two children are not a community – they are two only children. It is the role of the parents to direct their children’s upbringing, but under their direction the children educate themselves because they develop within the framework of a community of children, a collective of siblings.”

This is obviously counter-cultural and speaks directly against the secular meme. Again it is an example of an area of this theology which needs to be discussed and developed in order for people to have more confidence. I'm not expert, but it seems almost dangerous idea in the context of the current population crash we are facing in the first world:

I was asked to write a document on natural fertility for inclusion in the diocese' policy document on Marriage which gives a more thorough treatment to the Church's teaching on this issue. You can read it on my blog here.
Caroline Farrow contraception demographic winter family planning humanae vitae natural family planning Natural fertility NFP Sex