August 22, 2013
This year in Gozo, we rented a farmhouse in Gharb, which, by extraordinary coincidence, overlooked the shrine of Ta'Pinu. The house was called Dar is-Sultan, which by my (poor) reckoning, translates to something like 'home of the king'.

I recall on our first visit to Gozo, being dropped off at our accommodation, which appeared to be a mid-terraced two up, two down. It was actually very spacious and beautiful. This is the building style in Gozo and you never know what you're actually getting. It's also quite difficult to tell from the website you rent it from.

A word to the wise whilst we are on that subject: a family member booked a villa in the South of France through Owners Direct at the same time as us and their communication was hacked; they ended up losing all their money before a phone call to the villa owner alerted them to the fraud. The moral of the story is always make sure you speak to the owner if you're using Owners Direct! Dar is-Sultan is in Għarb which is the most north-western point of the island. We have stayed in this village numerous times before and really like it. It is close to Victoria (the centre of the island) and very close to Dwejra, which is the area where the Blue Hole, Azure Window, and Inland Sea all are located, also, the area that featured in the wedding of Drogo to Daenerys Targaryen in the first series of Game of Thrones: 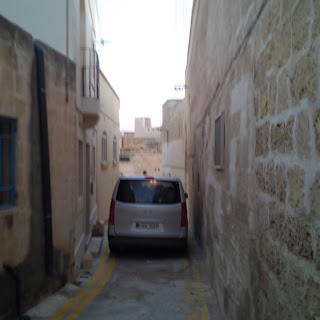 Entrance to the farmhouse is down quite a narrow alleyway just opposite Jeffrey's Restaurant. As you can see, there's no parking in the alley and we were quite concerned when we first got there. However, we soon got used to parking a bit round the corner. We had a big Hyundai i800 hire car (which I have to say, I really liked and was impressed with!) but I had no chance of getting it up the drive without incident. This meant dragging all the cases up the alley was a bit of a pain. Still, stuff like this (querky alleyways) is partly what gives Gozo its charm and is not to get too stressed about.
You enter the house through a wonderful little courtyard: 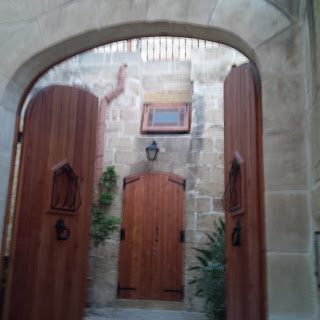 The door opposite there is a bedroom, and my mum stayed there while we were in residence. It has an en suite and air con too. The air con was much appreciated as it was really warm during our stay, high 30's to mid 40's. I don't find this a problem as long as I have a pool nearby to cool off in! We only used the air con at night, and found that Mary slept really well as a result of it. Certainly, she's a lot warmer in our house in England now, and is up a couple of times in the night, despite a fan. I'm not moaning, but it's summers like this you start thinking again about installing air conditioning at home. 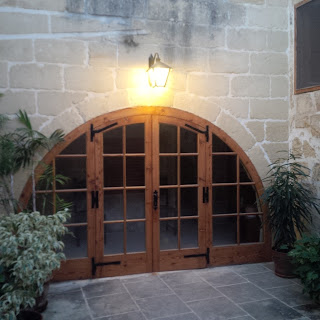 This is the door off the courtyard to the main house:
It's quite beautiful and the whole place is impressively appointed with ornaments etc. This is the view from the inside looking out on the courtyard:

As you enter, the corridor runs from right to left. On the right is a huge family bathroom, again beautifully appointed:

At the end of the corridor is an amazing sitting room, the mill room, which is spectacular! It has a lot of beautiful and interesting items in it, cannon balls and an antique confessional. I was offering to hear anyone's confessions that felt in need, but sadly had no takers.

The real shame about this is that we didn't use this room once. We've been to Gozo in October, and found a bit more use for the inside, but most of the time, you sit outside, to talk, to eat, to read. The only time you're really inside is to sleep.

At the other end of the corridor, there's a double bedroom with en suite. Then, up the stairs is the main living area. It consists of another seating area come lounge, with two sofas and a tv etc (which we didn't even turn on once for the whole two weeks I am pleased to say) and the kitchen/ dining area. 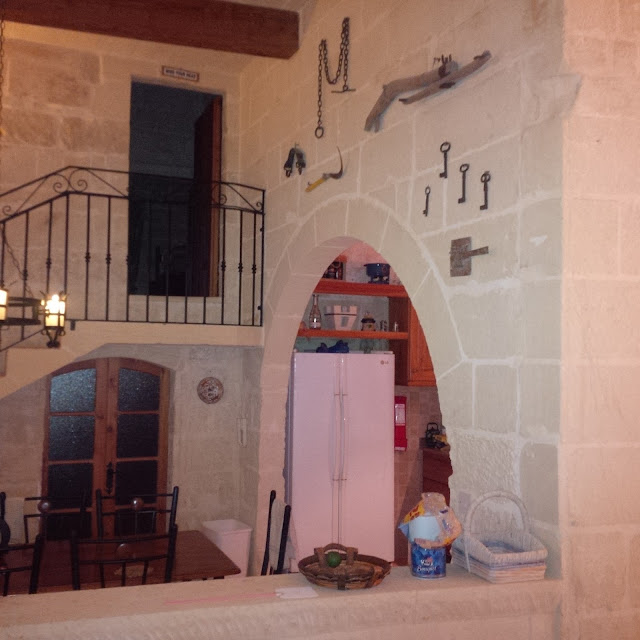 This is taken from the stairs on the way up with the dining table there and the kitchen through the arch. The cooker was pretty arcane, which was a shame. Gas hob and oven, but an electric grill. The kitchen had everything, but it is always a bit of a challenge when you love cooking and are very used to your own kitchen, to cook somewhere unfamiliar. The door you can see leads to the unused Mill Room again. In this picture (right) you are looking into the kitchen area from the dining bit (where the windows are). You can see the staircase going down and the seating area. 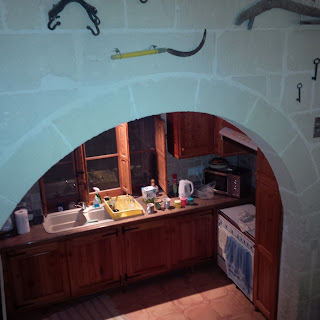 Up these stairs was where Will slept. It is a through room with a door on the other side where Lou, Mary and myself slept. It has a nice balconette and a door which led to the laundry room and the various roof areas (which are my favourite feature of Gozo houses). As I have mentioned, I could see Victoria, the lighthouse and Ta'Pinu from the roof of Dar is-Sultan:

I really liked our bedroom, which must have been above the Mill Room. The walls seemed very thick, which was good because life on Gozo starts early in the morning. As we were on the island in festa season, fireworks start at 8am to ward of the demons (apparently), although Brian said that it was as much to wake everyone up to the wonderful fact that it was festa!!

It has a reasonable bed, lots of storage space and a comfortable en suite bathroom. It also had lots of interesting little alcoves like this: 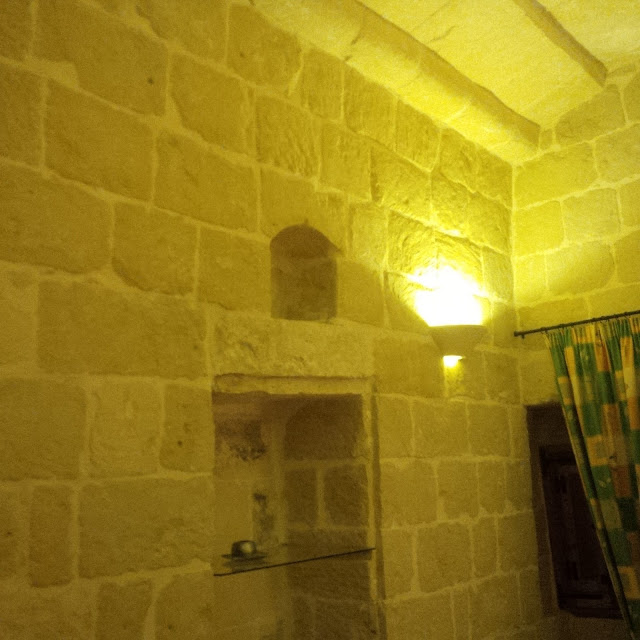 I always find myself wondering about the provenance of these old houses and what they were used for in the past. Gozo is, I find, a particularly evocative venue for such reflections, steeped as it is in so much history and legend, some of which I mentioned in my last holiday post.

Of course the most important part of the house on a holiday such as this has to be the pool and garden. The house benefits from a covered BBQ area complete with cushioned seating and a patio table and chairs. This allowed us to enjoy our meals al-fresco. 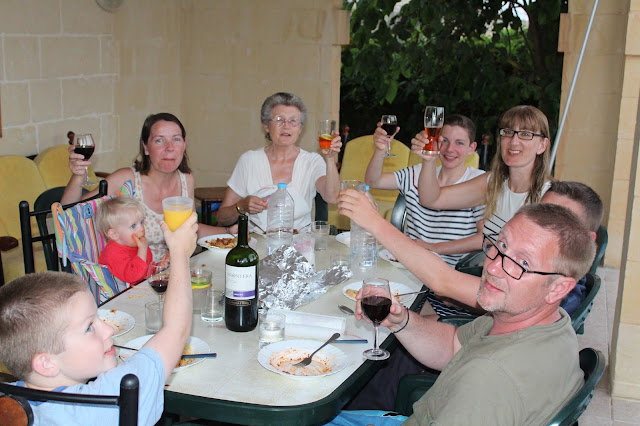 Mary was particularly impressed with my Spaghetti Bolognese: 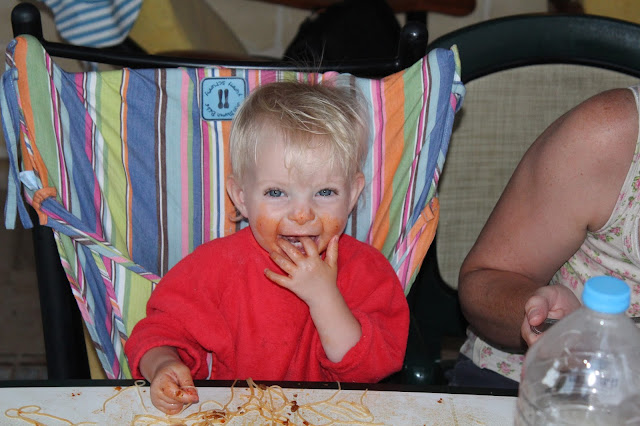 We all enjoyed fresh Sea Bream and Branzino (Sea Bass) on the BBQ cooked in foil with lemons and limes from the garden. There is a wealth of beautiful fresh fish on the island and later in the season you start to see Lampuki but we were a bit early this year. 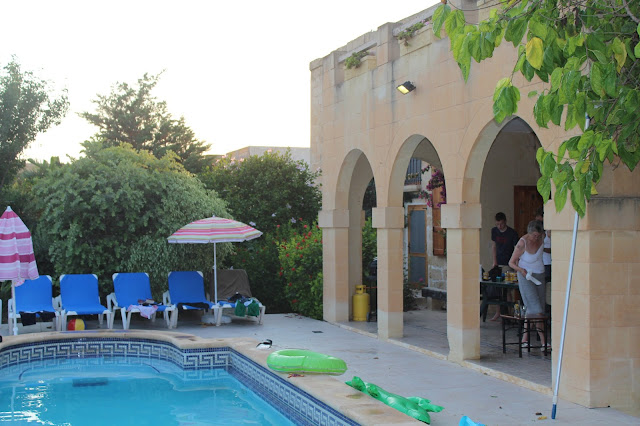 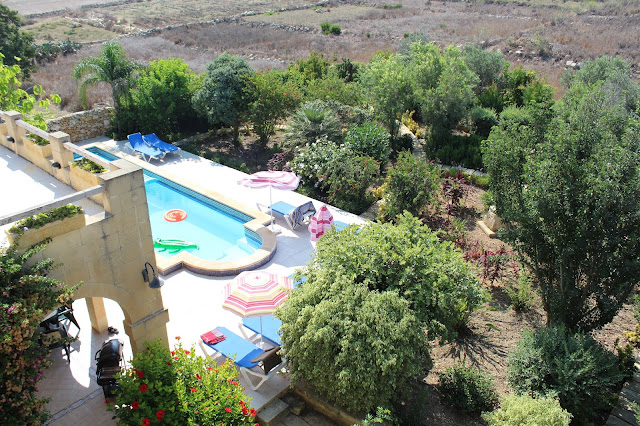 I took this picture from the roof. You can see that the beautiful gardens are quite extensive. There is also a little stone path weaving through the garden, a bench at the back where you can sit next to the grape vine and watch the world go by. 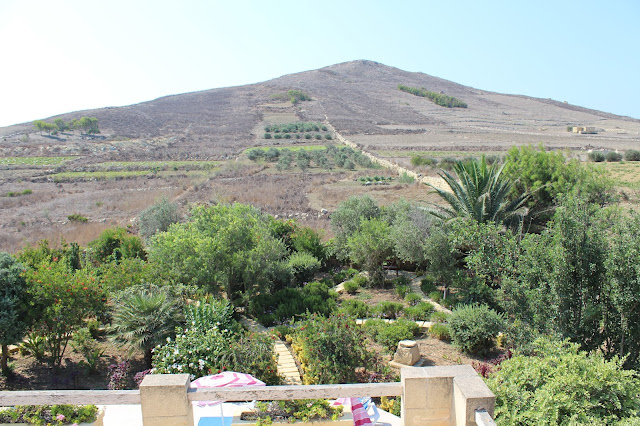 At the rear of the property are all these gardens where the family that own it grow melons, tomatoes, peppers, onions, aubergines, and olives. Each morning, the gardener would bring us a selection of beautiful fresh fruit and veg very early and leave it on the garden table. 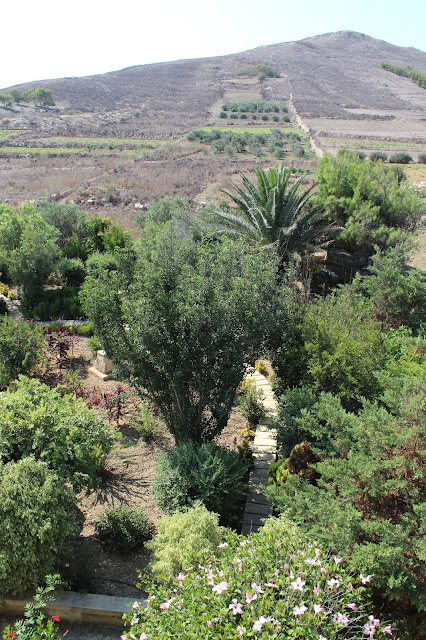 In this shot, you can see the path threading through the bougainvilleas. 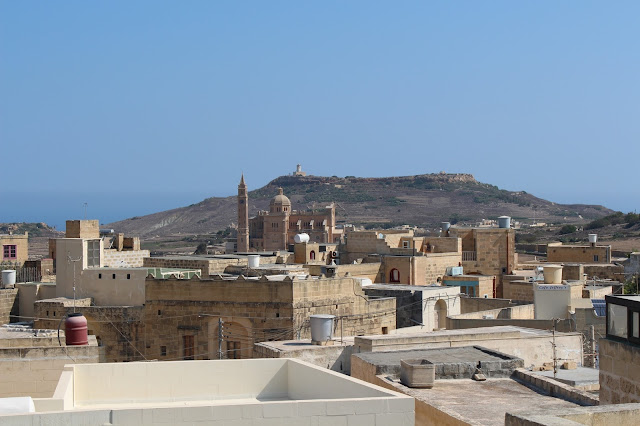 This is a picture of Ta'Pinu and the light house, i.e. towards the front of the house, in the day time. Over the other side, there was just fields all the way to Victoria in the distance: 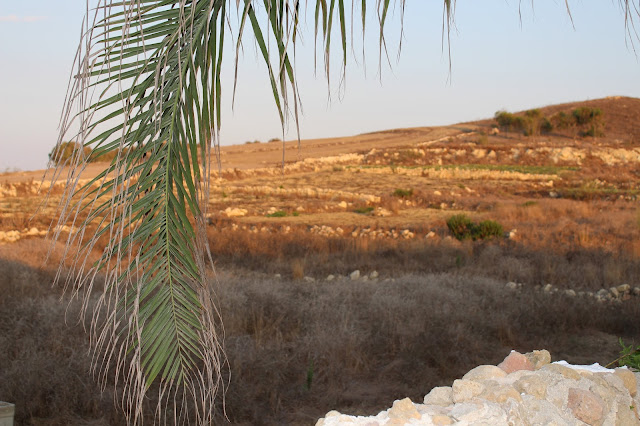