Syria and the Lessons we Haven't Learned. 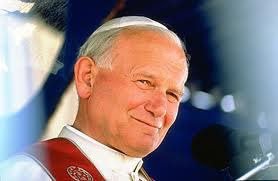 “Humanity should question itself, once more, about the absurd and always unfair phenomenon of war, on whose stage of death and pain only remains standing the negotiating table that could and should have prevented it.” ― John Paul II


John Paul II was my Pope in lots of ways. He was Pope from when I was 7 years old, to his death when I was 34. When I went through my questioning years, it was John Paul II who brought me back, through his writing in Crossing The Threshold of Hope.

When the Iraq war was mooted, I felt the motivation was ludicrous. Reading whatever I could, it seemed very clear that the justification given was paper thin. I was not sure of the true motivation, but President Bush was attending to some unfinished business without regard for international law, or the facts as I understood them.

I felt incredibly proud when my instincts were backed up with the most public and serious condemnations of the invasion of Iraq, which came from Pope John Paul II and other top officials at the Vatican. This was formative for me I think, as it confirmed my deepest allegiance was first to Christ and His Church, who clearly were the only public voice who were not interested in some obfuscated clandestine or nefarious agenda, but rather in the good of the people, the individual countries and indeed peace throughout the world.

Pope John Paul II was unequivocal in his sympathy for the victims of the 9/11 terrorist attacks and his condemnations of terrorism. At the same time, though, he had long been a persistent critic of Western policies that have led to poverty and resentment among Muslims in the Middle East.
I felt extremely proud that Catholic leaders did as much as they could to dissuade Britain and America from their bellicose course of action, despite the fact that, somewhat predictably, it was to no avail.
I was utterly shocked when Conservative Catholics in America tried to convince the Vatican and Pope John Paul II that the invasion was morally licit and even a very good idea. Especially on Catholic Answers, I was amazed at the attitude from people who criticise lapse Catholics for their dissent from Church doctrine who then went to extraordinary lengths to justify their dissent from Vatican pronouncements on war.

I was engaged with several discussions on this subject on the forum and I could not believe the response I was getting from Catholics I had discussed with for years and had really come to trust and respect as faithful and orthodox in their belief. It just goes to show how fragile faith can be, insofar as for some, it would seem only valid, so long as it does not challenge our own ideas of what constitutes right and wrong. So-called “Cafeteria Catholicism” is clearly not limited to liberals! I have many dear friends in America and have devoted a great deal of time and effort trying to understand this hawkish tendency, which, I am sure, has the best motivation in terms of standing up for those who are not strong enough to stand up for themselves. However, sometimes we must listen to the Holy Father in the Spirit of docility (CCC 87).


“War is not always inevitable. It is always a defeat for humanity... War is never just another means that one can choose to employ for settling differences between nations… War cannot be decided upon…except as the very last option and in accordance with very strict conditions, without ignoring the consequences for the civilian population both during and after the military operations.”

Consistent with the Church's teaching on legitimate defense, John Paul II was not advocating pacifism — he refers to war as a “last option,” not as no option. At the same time, though, he never thought that the invasion of Iraq had reached the "last option” stage. Catholic Bishops in the United States and Great Britain were unanimous in their support for his message of peace.


“The papacy does not accept the theory of unilateral preventive war. It does not agree with the Bush administration's foreign policy. It did not think that all possible grounds for a peaceful solution were exhausted before the American attack and, like most of Europe, it did not believe that there was sufficient evidence of weapons of mass destruction — and it turns out that they and not the Bush administration were right. It urged that nothing happen until the completion of the U.N. arms inspection — and it turns out that here again the pope was right and the president was wrong.... The teaching on the Iraq war is not “authoritative.” Yet, ought not Catholic conservatives, who virtually worship the pope, at least listen to him respectfully on this subject?”

I cannot help but feel a sense of déjà vu as I listen to the increase in rhetoric that marks politicians attempts to justify attacking and killing other human beings. That sense is hieghtened when I see what Pope Francis has to say on the issue:

I am concerned for those in Syria who are suffering already in a conflict, but I feel that again we have no real understanding of how firing missiles at the country from hundreds of miles away will actually improve things. In Martial Arts parlance we would term this "hit and hope".

The politics is indeterminably complicated and  the tangle of competing interests make it difficult to know whose agenda is the one we should support. From what I have heard from our politicians, it seems they are trying to paint one side as the "goodies" and the other side as the "baddies". There are lots of questions they don't even seem to have addressed, as the BBC Correspondent Frank Gardener pointed out in several tweets yesterday, for example:

The politician's rhetoric does not make me feel confident that they understand the situation better than I do, let alone better than people like Frank. Why will they not just wait for the UN Weapons Inspectors report? Surely, when you are talking about military action which might have serious consequences for the whole world, the more information one has the better? 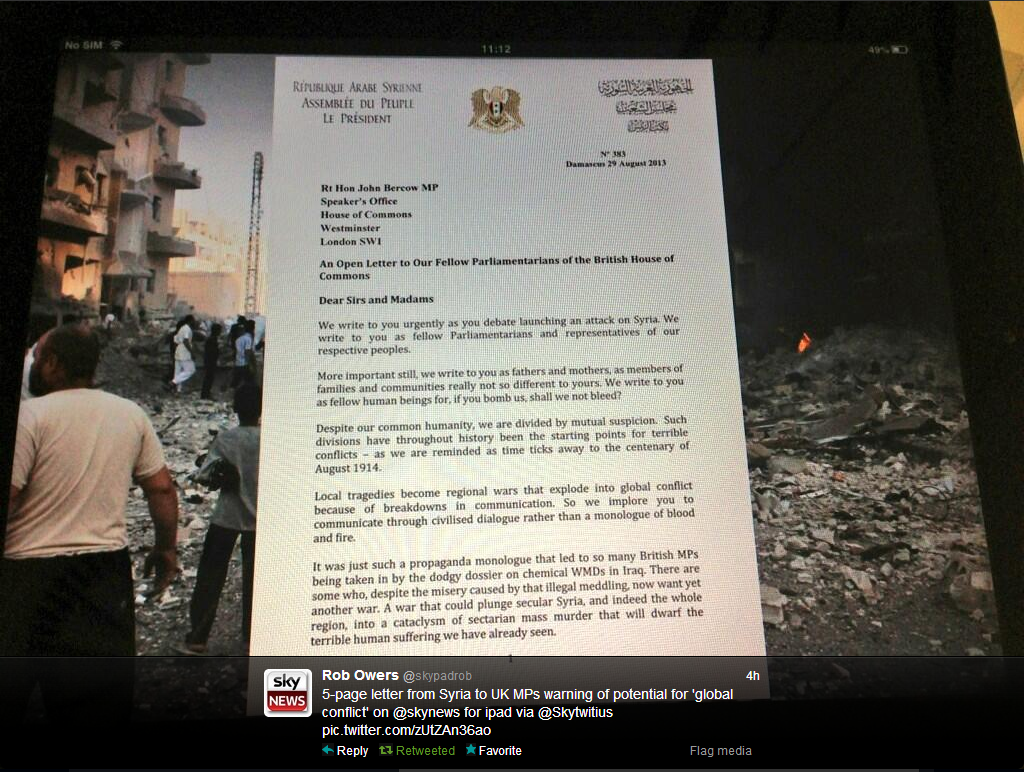 Once I would not have felt like that because I would consider it extremely arrogant. However after Iraq, I think I can trust my instincts in this regard. If the moral path for action was a clear cut one, I think I would be able to grasp it easily. I don't think that is in any way possible to pick out the "goodies" from the "baddies" as both sides have historically been responsible for atrocities against their own people. Meanwhile, David Cameron seems intent on punishing President Assad for the use of chemical weapons on his own people, without waiting for that to be confirmed by the proper authorities, and without any understanding of what his motivation could have been for this act. 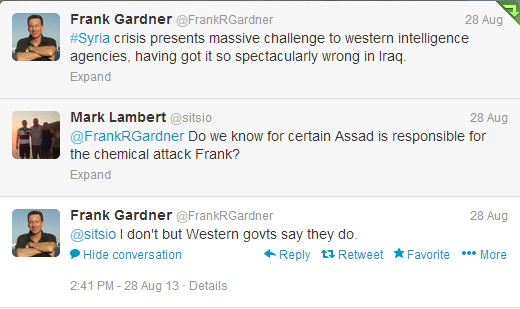 Of course, they also said they had evidence of WMD in Iraq, and we all know how that worked out don't we? Well do we feel any better this time around? Tim Stanley certainly doesn't:

Syria: UK Government publishes its intelligence and legal case for war – and it's not convincing

Meanwhile, Russia, Syria's great ally, sends warships to the Med. Put yourself in their position and wouldn't the persistent rhetoric from our politicians sound like sabre-rattling to you?

So, should we do nothing? Have we no responsibility for our brothers and sisters who suffer? Of course we do, but if we have learned anything from Iraq and Afghanistan, it should be that when the fighting has failed, when both sides are left counting their dead sons and daughters, when we finally realise we can't achieve what we set out to with force, then we return to the negotiating table, and we find a way to face the future together.

Let's not make that mistake this time. Let us throw all our efforts into working with all parties to achieve a diplomatic solution, to understanding all the difficulties and nuanced politics involved and to strive to expand our considerable resources on bettering the lot of the Palestinian people and all those who struggle in the Middle East. Let us remember that John Paul II identified the reasons for this problems and had been a persistent critic of Western policies that led to poverty and resentment among Muslims in the Middle East.

And let us remember our great Pope's teaching:

“Humanity should question itself, once more, about the absurd and always unfair phenomenon of war, on whose stage of death and pain only remains standing the negotiating table that could and should have prevented it.” ― John Paul II
Frank Gardener Iraq just war legitimate defense Pope John Paul II Syria