September 23, 2013
Tim Stanley notes that, despite the media furore, SHOCK HORROR the Pope remains a Catholic. He reports, on his blog today that, as much as many relativists would like to see the Pope tear down Catholic doctrine and replace it with something more...Well, more Anglican, he is, in fact, continuing to hold fast to the teaching which has been passed down to us from the Apostles. 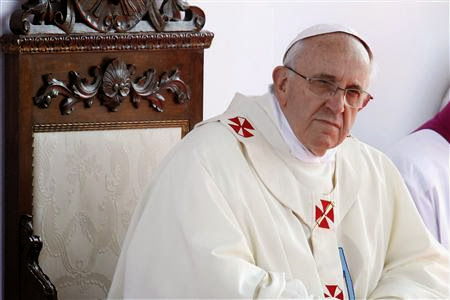 I'm not sure the headline is theologically correct (sorry Tim) as people actually excommunicate themselves, as this wayward priest has done. The job of the Church is merely to inform them of the fact. Warn them of the danger their soul is in, in charity and for their own eternal benefit one would hope. Still the fact remains that Pope Francis has given his authority to the excommunication of this lost priest. Most interestingly, Tim quotes:


"It's interesting to note that the former priest tells The Age that he "wants the same thing as the Pope" which is "to encourage reform and clear need for renewal in the church." I read from this that Reynolds has, like many liberals, misunderstood Francis' words. Structural reform is clearly necessary to prevent future horrors like the child abuse scandal, and renewal is something that Christians always desire. But Reynolds would throw out Catholic doctrine – something Francis would never do because he is, despite the best wishes of so many in the media, a Catholic. His treatment of Reynolds proves that point."

This is certainly true. Many people have been reading Francis and thinking "now those orthodox Catholics are going to get it, this guy is going to bring the Church bang up to date". Really folks, it's not a very knowledgeable perspective. The Pope's job is to protect the deposit of faith. No pope, not even the dodgy ones, has ever changed dogma. Stuff like "gay marriage", and female ordination are not issues up for grabs. The Church is a great teacher simply because her perspective is not skewed by temporal bias. The Pope IS Catholic—that's kind of the whole point!
Excommunication Gay marriage Pope Francis relativism SSM