You may remember I drew attention to a meeting of ACTA in Caterham recently which was condoned and even supported by Bishop Kieran Conry.

Protect The Pope had a communication from a reader who was present for some of the meeting and reported the following:

'I left just as we were being broken into Discussion Groups, and I was not the only one. Wish I had the courage and knowledge to stay and argue but I was shaking the whole way through. First up, after some prayers asking for guidance, was a meditation about a round table; to make a round table hurts the wood and the people (?) but you end up with a table around which everyone sits in equality, no head of the table. No elaboration was given, but I imagine this is a hint of the levelling of the church hierarchy.

There was a talk by Brian Pointer, Chairman A&B ACTA, briefly outlining the origins of ACTA and how some single ideals which were overwhelmingly important to individuals had to be ironed out as they couldn’t accommodate too many aims and needed to have an agreed direction. They approached +KC who was very cautious at first but then relaxed (or should that be chillaxed?) with them, and when they asked if they could organise meetings in the diocese he said OK. This they took as endorsement of their being a “Catholic” organisation.

Fr Tom O’Loughlin seemed a very genial man, but did not hide his disdain for JP II or B XVI, or the new rite. He also said there was no such thing as the Hermeneutic of Continuity. He described himself as a Theologian of History, not of Doctrine.
There was quite a number of ACTA reps there, and Fr Ian Byrne (one of the seven signatories on that letter) was among the audience. As expected, the listeners were probably 90% bus pass holders. I would guess there were roughly 150 to 200 people but there had been a bad accident on the M25 so maybe some were waylaid.
Sorry not to have stayed any longer, but there was going to be a collection and recruitment drive and I just felt awful being there. The meeting is still going, but they are probably wrapping up to prepare for mass. Dear Lord, please protect our church.'

Protect the Pope comment: A reader of Protect the Pope has sent us eye-witness testimony of the A Call to Action meeting at Sacred Heart Church, Caterham, which was given the go ahead by Bishop Kieran Conry, ordinary of the Arundel and Brighton diocese. According to this eye-witness testimony of ACTA's meeting at Sacred Heart Church, Caterham, A Call to Action in Arundel and Brighton sees itself as a 'Catholic organisation' endorsed by Bishop Conry, which at the same time expresses disdain for soon to be canonised John Paul II and Benedict XVI, and disdain for the New Translation of the Roman Missal. It appears that the good people of Sacred Heart, Caterham, were served the usual fare of a la carte Catholicism specialised in by dissenting Catholics.


I think the part of the meeting attended here seemed not too bad, as bad things go, although as Nick (Protect the Pope) comments, it does show a worrying disdain for JPII and BXVI, the Popes who, after Vatican II, unfolded the philosophy and the theology for the faithful. It is this 'pick-and-choose' mentality that runs against the whole foundation of the Catholic faith, which takes into account the sensus plenior. More over, the anger and bitterness that these people often exhibit with the Church has to be a clue to their personal and spiritual confusion.

One of the big issues with ACTA is their disingenuous modus operandi. I have seen communications between ACTA members who openly acknowledge that the key to success and getting the backing of Bishops like Kieran is not to be too vocal (at this stage, anyway) about their true objectives. They recognise that the 'dialogue' and 'Vatican II' labels legitimise them. Ultimately their agenda is to destroy the Church.

It's OK though, because people like Nick Donnelly and lots of other Catholics who are faithful to the Magisterium and interested in preaching the Gospel instead of their own agenda are on to you ACTA. 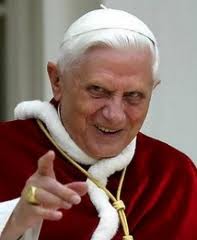