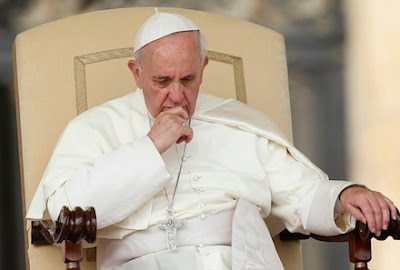 For some reason, I keep thinking about the Letter to Diognetus (Nn. 5-6; Funk, 397-401) lately whenever I reflect on what Pope Francis has said.

There's a lot of noise about his interview, given in August this year to Fr. Antonio Spadaro SJ, lots of different interpretations, concerns being expressed, different factions trying to claim his agenda is the same as their own. I was quite surprised by how exasperated he seems to be with Catholics who focus on the wickedness of the world. He thinks this attitude paralyses the Church. As he put it:

“The complaints of today about how ‘barbaric’ the world is – these complaints sometimes end up giving birth within the Church to desires to establish order in the sense of pure conservation, as a defence. No: God is to be encountered in the world of today.”

This is wonderfully challenging and makes sense when one understands how this man has come face to face with the darker side of life and has spent much of his time on this planet working with and for the sick and the poor. What a Christ-like example; I can only say I find it utterly inspirational, and would share the words of this ancient letter regarding Christians in the world:


"Christians are indistinguishable from other men either by nationality, language or customs. They do not inhabit separate cities of their own, or speak a strange dialect, or follow some outlandish way of life. Their teaching is not based upon reveries inspired by the curiosity of men. Unlike some other people, they champion no purely human doctrine. With regard to dress, food and manner of life in general, they follow the customs of whatever city they happen to be living in, whether it is Greek or foreign.

And yet there is something extraordinary about their lives. They live in their own countries as though they were only passing through. They play their full role as citizens, but labor under all the disabilities of aliens. Any country can be their homeland, but for them their homeland, wherever it may be, is a foreign country. Like others, they marry and have children, but they do not expose them. They share their meals, but not their wives.

They live in the flesh, but they are not governed by the desires of the flesh. They pass their days upon earth, but they are citizens of heaven. Obedient to the laws, they yet live on a level that transcends the law. Christians love all men, but all men persecute them. Condemned because they are not understood, they are put to death, but raised to life again. They live in poverty, but enrich many; they are totally destitute, but possess an abundance of everything. They suffer dishonor, but that is their glory. They are defamed, but vindicated. A blessing is their answer to abuse, deference their response to insult. For the good they do they receive the punishment of malefactors, but even then they, rejoice, as though receiving the gift of life. They are attacked by the Jews as aliens, they are persecuted by the Greeks, yet no one can explain the reason for this hatred.

To speak in general terms, we may say that the Christian is to the world what the soul is to the body. As the soul is present in every part of the body, while remaining distinct from it, so Christians are found in all the cities of the world, but cannot be identified with the world. As the visible body contains the invisible soul, so Christians are seen living in the world, but their religious life remains unseen. The body hates the soul and wars against it, not because of any injury the soul has done it, but because of the restriction the soul places on its pleasures. Similarly, the world hates the Christians, not because they have done it any wrong, but because they are opposed to its enjoyments.

Christians love those who hate them just as the soul loves the body and all its members despite the body's hatred. It is by the soul, enclosed within the body, that the body is held together, and similarly, it is by the Christians, detained in the world as in a prison, that the world is held together. The soul, though immortal, has a mortal dwelling place; and Christians also live for a time amidst perishable things, while awaiting the freedom from change and decay that will be theirs in heaven. As the soul benefits from the deprivation of food and drink, so Christians flourish under persecution. Such is the Christian’s lofty and divinely appointed function, from which he is not permitted to excuse himself."

Luke Coppen also drew my attention to an interesting dichotomy in his synopsis:


His life was saved by a Sister

I knew Pope Francis almost lost his life in his youth, but didn’t know he credited a Sister, rather than a doctor, with saving him. “When I went through my lung disease,” he recalled, “the doctor gave me penicillin and streptomycin in certain doses. The Sister who was on duty tripled my doses because she was daringly astute; she knew what to do because she was with ill people all day. The doctor, who really was a good one, lived in his laboratory; the Sister lived on the frontier and was in dialogue with it every day.”

I can't help but wonder if there is something analogous about the story of a Sister who lived on the frontier and knew what was actually going on and how to deal effectively with it, and the Church which needs to be in the world and not of the world? Isn't Francis himself the living embodiment of this idea? He is immersed in the world, but yet he rejects so many of the trappings of the world.

Pope Francis' humility seems to be waking something in our clergy her too, inspiring them to question their actions and motives, as reported of Archbishop Vincent Nichols in the Catholic Herald:

In a homily at a Mass with seminarians at Walsingham last weekend, he said he had asked himself if he should be following Pope Francis’s example of using older cars. “What am I doing here? What do I know about questions involving the regulation of the finance industry?” he said. “I also thought that I should be in a Ford Focus (or even a battered old Renault 4), heading off to one of the many economically deprived parts of London!”

It is early in this papacy, which has so far been marked by a man's humility, empathy, and simplicity. I think we should stop worrying about what we want from the Pope, start listening to what he is teaching us.
Archbishop Vincent Nichols Christians in the World Fr. Antonio Spadaro SJ letter to Diognetus Pope Francis Pope's interview