Versus Populum (Towards the People). 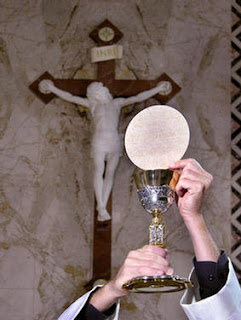 One issue that has interested me for some time is the question of orientation for Mass. I recall clearly hearing stories that in "The Old Days" the priest used to have his back to the people. How crazy was that?!! I vaguely recall, when I delved deeper into why such a bizarre practice should have taken place at all, I was informed that the whole altar used to be blocked off and that's where we get altar rails and bells from.

It took me a long while to glean an objective perspective on the practice. Like much that was boarded over with plywood in the sixties, I have learned that a bit of restorative investigation can yield all kinds of spiritual rewards.

Perhaps the seminal contemporary work on all this is Ratzinger's 'The Spirit of the Liturgy', inspired by Romano Guardini's book of the same title. I found it such essential reading because it attempts (and really succeeds) to educate the reader and deepen their understanding and love of the Liturgy. Its basic intentions coincide with what Guardini wanted to achieve but translates what Guardini did at the end of the First World War, in a totally different historical situation, into the context of our present-day questions, hopes and dangers. It simply provides a wonderful aid to the understanding of the faith and to the right way to give the faith its central form of expression in the Liturgy: it makes Mass mean so much more! 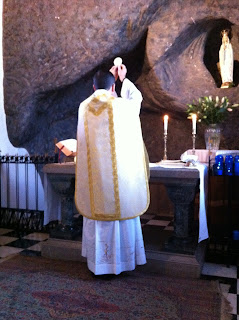 Part of why we should care about the liturgy is its centrality in the devotional life of each Catholic. Mass can be, and should be, pedagogical; re-presenting Salvation history before the faithful. It should be reverent in extremis, as God Himself is manifest on the altar at the consecration. We can only achieve this pedagogical dimension if each of us knows what is going on and acts accordingly.

The Mass is a worship of God. The Mass is our offering to God, yet the orientation versus populum (towards the people) suggests a 'closed circle' with the people. If you talk to Mass goers today, they speak as if Mass is said to them. The priest is there somehow to entertain them, and there is much talk of good or bad priests based on their "performance". Indeed, one priest even commented to me that "there was nothing in that liturgy for a ten year old." Sorry father, we teach our children that Mass isn't about how entertained they are, rather they are the hosts at a gathering, maybe just once a week, where Jesus is our guest, and what more an incredibly important and honoured guest could there be?

The possibility of freestanding altars was first mooted authoritatively in the decree Inter Oecumenici in 1964, before this, versus populum would have been largely impossible of course. However, it seems that there is evidence that versus populum was taking place in certain circles a while before this (perhaps starting in 1960), providing  a perfect example of 'anticipatory obedience': doing, boldly and openly, not what the Church says but what you hope the Church will come round to saying before long. And by so doing, the progressives paved the way for the changes they favoured. 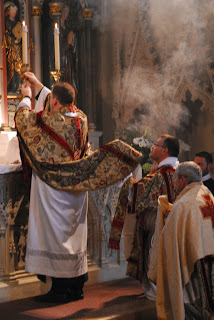 Today I read this blog on orientation which sparked me off thinking about this. It suggests that instead of the Liturgy being upwardly focused to God and outwardly toward the mission of the Church (to make disciples of all the nations), we tend today to “gather” and hunker down in rather closed circles looking at each other, and speaking at great length about ourselves. I think and hope that a greater exposure to these ideas might make it easier for some priests to introduce ad orientum celebrations of the Mass, although I acknowledge that without proper catechesis (as ever) congregations will just end up hurt and confused. So consider this my own contribution to the debate, in the hope that in Leigh-on-Sea at least, fellow parishioners might give some consideration Mass with the priest leading us in prayer to God, rather than the closed circle of versus populum.
ad orientum Joseph Ratzinger Mass Romano Guardini The Spirit of the Liturgy versus populum