Who is the ACTA Coordinator in your Diocese? 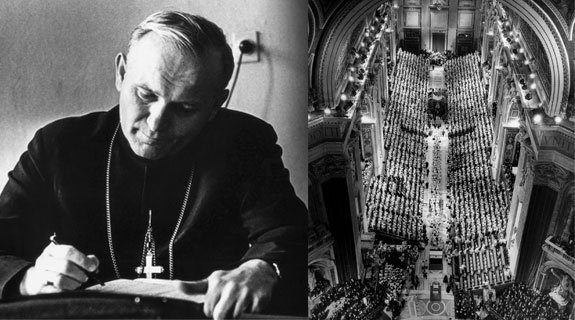 I was sorely tempted to title this post "Know Your Local Heretic".

Recently, I drew attention to the fact that Jean Riordan, the Chair of A Call to Action’s National Steering Group, has sent out an email to its 1,200 registered members encouraging them to form a group in every diocese to spread its mission of dissent, or as they frame it, ‘dialogue and openness’.

Jean Riordan also wants ACTA members to tell other parishioners about ACTA and invite local priests and members of religious orders to join as well.

Are our bishops happy about a dissent group establishing diocesan groups with representatives pushing their agenda in every diocese in our country?


I think the general consensus among clergy is that ACTA is nothing to worry about. They are are old and past it, a load of has beens banging on incessantly about "The Spirit of Vatican II" without any intention of understanding what Vatican II actually taught. For example, The Tablet reports +Conry misrepresenting Paul VI's encyclical Humanae Vitae terribly, really getting it wrong with regard to what the Church teaches about conscience. The teaching on conscience in Humanae Vitae is directly taken from Vatican II's Pastoral Constitution on the Church in the Modern World, Gaudium et Spes, n. 16 (so you'd think they'd understand it):
Habitual sin blinds our conscience. Conscience frequently errs. In other words, it is not simply a matter of conscience, that is, using the excuse that 'my conscience tells me [insert prohibited action here] is OK therefore I can do it', but importantly, a matter of right formed conscience; right formed by the Scriptures and the Teaching authority of the Magisterium of the Church. Being Catholic, foundationally, means accepting Jesus' words that we can know the truth and that the truth will set us free. Moral imperative is a reality, and our conscience is the mechanism that generally informs us when something is wrong, or when it is right. However, modern society is complex and the solutions to the moral conundrums we face are not always clear.

It is essential then, that our conscience be informed and our moral judgment enlightened. A well-formed conscience is upright and truthful, formulating its judgements according to reason, in conformity with the true good willed by the wisdom of the Creator. The education of conscience is indispensable for human beings who are subjected to negative influences and tempted by sin to prefer their own judgment and to reject authoritative teachings. If it is all subjective and about the way I feel on any particular issue, how do we know when we have got it wrong? The answer is simple, we turn to the Church, and her centuries of careful consideration and deep wisdom. We turn to the infallible Magisterium for formation and guidance (see CCC 1783).

Of course, we don't know all the answers, and so we have a sacred duty to educate our consciences. The education of the conscience is a lifelong task. From childhood we are aware of the way we and others act: our consciences awaken us to the knowledge and practice of the interior law recognised by conscience. Prudent education teaches virtue; it prevents or cures fear, selfishness and pride, resentment arising from guilt, and feelings of complacency, born of human weakness and faults. The education of the conscience guarantees freedom and engenders peace of heart. (see CCC 1784). Pope John Paul II did much more work on these issues and clarified the teaching in Veritatis Splendor, which leaves the reader in no doubt on the issue and has the stated purpose:

In particular, note should be taken of the lack of harmony between the traditional response of the Church and certain theological positions, encountered even in Seminaries and in Faculties of Theology, with regard to questions of the greatest importance for the Church and for the life of faith of Christians, as well as for the life of society itself. In particular, the question is asked: do the commandments of God, which are written on the human heart and are part of the Covenant, really have the capacity to clarify the daily decisions of individuals and entire societies? Is it possible to obey God and thus love God and neighbour, without respecting these commandments in all circumstances? Also, an opinion is frequently heard which questions the intrinsic and unbreakable bond between faith and morality, as if membership in the Church and her internal unity were to be decided on the basis of faith alone, while in the sphere of morality a pluralism of opinions and of kinds of behaviour could be tolerated, these being left to the judgment of the individual subjective conscience or to the diversity of social and cultural contexts. (Veritatis Splendor n.4, bold emphasis mine).

I love the way that the Tablet reports Bishop Kieran as saying that:


"...enforcing strict teaching on the use of contraception risked turning people away from the Church and said that most practising Catholics had accommodated the teaching while following their own consciences."

As far as I have experienced it, it is precisely the lack of sound teaching, ambiguity and confusion surrounding issues like this which have led to the Church hemorrhaging members over the last forty years. If we no longer stand for something, we will end up not standing for anything.