October 25, 2013
Jesus answered, “Very truly, I tell you, no one can enter the kingdom of God without being born of water and Spirit. What is born of the flesh is flesh, and what is born of the Spirit is spirit. Jn 3:5-6 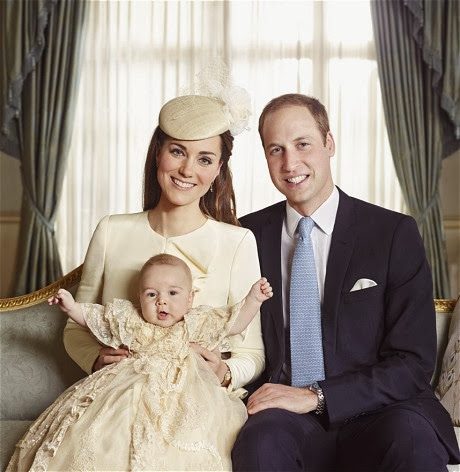 There has been a lot of reporting of the Royal Baptism this week. I have to say my first thoughts were purely spiritual ones: thank God! Thank God that Prince George has been Baptised, that he has entered through "the door of the Church".

Some have suggested that the BBC, which seems increasingly over-run with secularists, has been criticised for not covering the event, and indeed, seems determined to diminish the event in whatever way possible. "Christening", as they are intent on referring to the Sacrament as, has changed. Many fewer people are bothering with it at all, those that do have many more God Parents. Reluctant to relinquish all vestiges of Church tradition despite their rejection of God, the British Humanist Association reports that "naming ceremonies" are on the rise. The age at which children are being Baptised is also increasing. In 1992, almost 80% of Church of England Baptisms were of babies under a year old. By 2011 this had dropped to about 60%. One in three Church of England Baptisms is now of a child between the ages of one and 12. Apparently, these days more and more parents are waiting until they've had a second child and then getting both "christened" together.

Perhaps we can attribute these changes to the growing secularism in our society. Not so long ago, new parents would rush to get their new born Baptised, to wash away the stain of original sin, and entrust their child's soul to almighty God. Does anyone today see any metaphysical consequence to not being Baptised? After all, how can God condemn an innocent child, that, surely, makes no sense? And the Church has done away with Limbo in back in 2006.
The Catechism explains this beautifully:

(CCC 1257) Baptism is necessary for salvation for those to whom the Gospel has been proclaimed and who have had the possibility of asking for this sacrament.(Cf. Mk 16:16). The Church does not know of any means other than Baptism that assures entry into eternal beatitude; this is why she takes care not to neglect the mission she has received from the Lord to see that all who can be baptized are "reborn of water and the Spirit." God has bound salvation to the sacrament of Baptism, but he himself is not bound by his sacraments.(Emphasis mine).

Obviously infants have neither knowledge of the Gospel, nor have they asked for Baptism. So why do we get our children Baptised?

All the Sacraments, instituted by Christ, mark out the schema of our lives and bring together a family and God in celebration of a major way point in the journey of life. A Baptism is one of those occasions when you can gather everyone around and be sure that they are supporting the new life of your child; the family is corporate, and it is celebrations like Baptism that bind families together as "a school of deeper humanity":

All members of the family, each according to his or her own gift, have the grace and responsibility of building, day by day, the communion of persons, making the family "a school of deeper humanity": this happens where there is care and love for the little ones, the sick, the aged; where there is mutual service every day; when there is a sharing of goods, of joys and of sorrows. Familiaris Consortio 21.

So even if you struggle to understand the metaphysical and salvific dimension to Baptism, it is easy to understand how Baptism constitutes incorporation into the body of Christ; the Church. This means you are a member of a community, with the rights and responsibilities that entails. People know you and look out for you, and you start a journey into God, the Trinity, perfect communion, Heaven.

The Royals
I would like to think the occasion of a royal Baptism might encourage others to consider Baptism for their children. It gives good example. I can't help but wonder how others view the royal family these days. Are they anything more than a hang-over from older days? Do we consider the royal family as anything other than anachronistic? Something with no modern relevance, impotent, belonging solely in history, perhaps charming but also a little ridiculous, clearly kitsch and only for the tourists.

Of course, our new democratic constitutions have definitively dispensed with such undemocratic and unrepresentative notions, in our modern world the notion of kingship is purely ceremonial. But hang on a moment, is the truth that we still do have kings - even if we call them something else? After all, what is a king? A person vested with ruling and sovereign authority over land and people. He is a single personage with the right to rule over the nation. Surely then, a president or prime minister is a monarch who differs only in the principle of selection that confers upon him or her that particular role. In spite of much protestation we are not ruled by the masses; the people never choose to rule. Instead they always choose someone to rule over them. We have not replaced monarchy with democracy, but hereditary monarchs with elected ones.

The lesson then - however plural the means of selection might be - is that someone always rules. Our experience of elected rulers shows them to be just as self-interested, just as corrupt, just as willing to ignore the duties of office for their own personal gain as the worst monarchs.

And our monarchy helps us to remember that God is a part of life, through instances like this, snap-shots of a family gathering together before God to welcome a new member of their family. 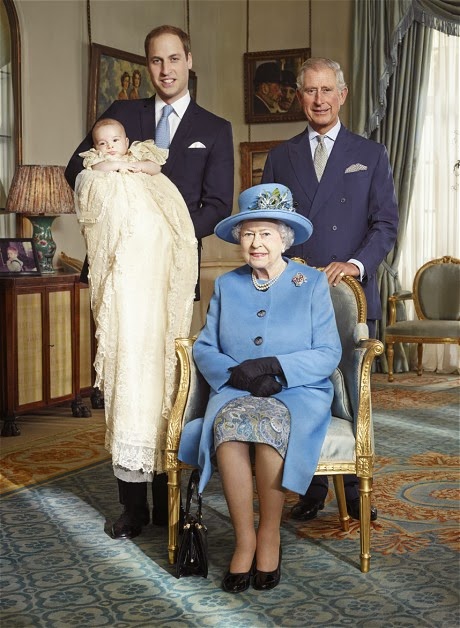 I think the above picture in particular sums up the continuity which is the monarchy’s greatest strength. It shows the Queen posing with the next three kings of Britain and the Commonwealth realms, the first such photograph for 114 years. The last similar occasion was in 1899, when an 80-year-old Queen Victoria posed with her direct successors Edward VII, George V and Edward VIII. This time, the Queen, who is 87, is pictured with her son the Prince of Wales, 64, grandson the Duke of Cambridge, 31, and three-month-old great-grandson Prince George.

In Britain, the monarchy should act as democracy's conscience. Britain never fell into extreme tyranny because we always thought that beyond the will of the people lay an objective reality not invented by human will, but which human will, individually and collectively, can ceaselessly try to discern. Certain inherited institutions: the king, the lords and the church, representing the one, the few and the transcendent; stood guard over the notion of the objective good and the common good. Perhaps the monarchy can also act as Britain's religious conscience, reminding us all that God is a part of our lives every day.