October 18, 2013
I love Catholic Memes, whoever is behind it is brilliant and, I think, really uses social media to spread the Gospel with witty, intelligent. 'memes', and also, perhaps most importantly, to get us thinking and talking about our faith.

OK so you might not agree with everything they post, but you can't argue that it's failing to engage people, with literally thousands of 'likes' and hundreds of 'shares' on each 'meme' they post on Facebook.

A meme is an idea, behavior, or style that spreads from person to person within a culture. A meme acts as a unit for carrying cultural ideas, symbols, or practices that can be transmitted from one mind to another through writing, speech, gestures, rituals, or other imitable phenomena. Supporters of the concept regard memes as cultural analogues to genes in that they self-replicate, mutate, and respond to selective pressures. In this context (i.e. Catholic Memes), the memes are a picture with some quip or fact.

Yesterday, they posted this: 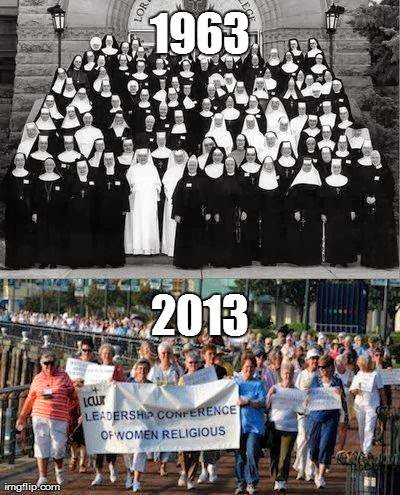 The inference is that The number of consecrated women religious in 1963 was 180,000. In 2013 it is only 56,000. What happened? Now, before we start, I would point out that I don't think this is about the way people look. It's not about judging books by their covers, and the women in the bottom picture were probably in the top picture as well, and have lived their lives in service to the Church and us; so Deo gratias!

The discussion point, just based on the picture, could be that what has caused a decline in vocations is that women stopped wearing the habit. One could look a little deeper and suggest that perhaps that was merely the outward sign of a more fundamental change. A change in approach, a change in theology.

Although the habit is definitely a powerful sign of witness today, It's important to remember that the Franciscan habit was just the clothing of the poor at that time, with a simple cord which was added as a sign of penance. Sometimes we do not value the power of symbols, but it could well be argued that the sisters in the 2013 picture above are reminding us that the habit doesn't make us holy, it is living the mission that makes us holy. One religious brother posted the following comment under the picture:

I am a postulant with the Brothers of the Christian Schools. Many of the men in this order wear the habit and we have vocations issues as well. We also hold true to the teachings and doctrines of our Church and have vocation issues. I don't think the habit is the issue, the secular culture is the issue. If people want more Brothers, Priests, and Sisters, then they need to suggest that their sons and daughters join. To many people say they want this, but don't do any work to promote it! They write on this board but talk to young people about vocation. Every vocation starts with a prayer, but you need to pray that God call your sons, your daughters, your nephews and nieces to be in Religious life. If you don't talk to them, who will? God acts through all of us, not just through those in consecrated Religious life.

Pause for thought indeed, and a refocusing of our attention from internal dialogue and questions about orthodoxy, to the external battle, our witness against the culture of death and living our Christian mission in a way that people know and see and want. Are we doing this? Have you spoken to your son or daughter about vocation? How would you feel if they told you they were thinking about a vocation?

Still I have to ask, along with Catholic Memes, why are Female Religious liberalising themselves into non-relevance and non-existence? Who is telling themselves that this is actually working?

One interesting parallel is the National Health Service (and probably the medical profession at large). Nurses have gone from professional uniforms that commanded authority and respect to a much more relaxed mode of dress. This isn't the only problem though, hand in hand has come changes in the way nurses are educated and the ratio of practical experience against classroom experience. The result seems to be a lack of 'care' in the profession. Do you think this parallel works on lots of levels as I do?

Ultimately, I don't think Catholic Memes posted this to complain about the lack of habits (although that may have been part of the point). The facts are there are far more problematic issues here than not wearing habits). There are some communities that don't wear habits and are still very orthodox. The problem with the LCWR isn't the lack of habits but the lack of observance of Church doctrine. Many--not all, but many--communities in the LCWR lobby for things blatantly against Church teaching (female ordination, abortion, SSM, etc.). This is what we need to address, recalling the Apostolic nature of our faith, as Pope Francis has been reminding us of recently, and concentrating on understand the wealth of Church teaching, rather than promoting our own, selfish theology. Remember "Orthodoxy" means "right-thinking". (from the Greek orthos ("right", "true", "straight") + doxa ("opinion" or "belief", related to dokein, "to think").

The thing is, I firmly believe that young people don't want a half-baked vocation. How can we expect our children to commit themselves to something we don't passionately believe in, or relativise by picking and choosing what we believe in? Young people want to heed God's call to heroic virtue, to become saints. They want a proper challenge, something worthwhile, something that will fight the secular culture and challenge accepted ideas. In short, they want the real, substantial meat of the Church.