The Devil is in the detail

October 17, 2013
Recently, Pope Francis spoke at morning Mass about the devil. This is something you probably won't find reported on mass media, it is really disquieting that the head of 1.1 billion Catholics, a man of science, a man with such a wealth of experience, a man with such an inspirational, humble, way about him, should believe in the reality of evil spirits. Here's the homily:


Pope Francis brilliantly preaches on an important topic. It is a topic to which he seems often pressed to return: the reality of the enemy, and the necessity of resisting him. Really important things to take to heart, here, things we need to think about.

I posted the video on my Facebook page and it sparked off a rather valuable theological discussion.

There is no doubt that the devil is a bit of a touchy subject in modernity, and I think it would be fair to say that we have quite limited knowledge about that sort of thing. It is interesting to note, however, that every culture in human history has believed in the reality of evil spirits of some kind.

The synoptic Gospels portray Jesus as overturning the kingdom of Satan by expelling demons. Doctrinally, the existence of demons and the reality of possession have never been defined and are not so much articles of faith as presuppositions of biblical and traditional belief (see D.S. 800).

If we look to the Catechism of the Catholic Church, we learn that the Church teaches Satan was at first a good angel, made by God: "The devil and the other demons were indeed created naturally good by God, but they became evil by their own doing." This "fall" consists in the free choice of these created spirits, who radically and irrevocably rejected God and his reign. We find a reflection of that rebellion in the tempter's words to our first parents: "You will be like God." (Gen 3:5) The devil "has sinned from the beginning"; he is "a liar and the father of lies".(1 Jn 3:8; Jn 8:44.). In Luke, we have Jesus own words: “I watched Satan fall from heaven like a flash of lightning."

In pastoral practice, the Church continues to offer Christians spiritual resources to resist the power of evil, including the practice of solemn exorcism when that is deemed appropriate. But that practice has also been to resist the effort to draw from such experiences anything about the existence, nature, or character of demons or the devil.

From a scriptural and theological point of view, the reality of the devil is similarly taken for granted as a spirit of malice, created good, but turned from God and hostile to humanity. What the devil is is not a part of the Church's defined teaching, nor is it of major concern except as an aspect of the theology of creation. Traditional teaching regarding the devil's activity focuses on temptations to sin and the need for Christians to be aware of the transcendent aspect of both temptation and sin, which they ought to resist in advance by prayer, spiritual discipline, and works of love and justice and in combating which they can always rely on the superior power of Christ and the Holy Spirit.

I suppose this is the important point: we mustn't see God and the devil as two factions in some kind of cosmic battle for humanity. They are not equal, this is not a dualistic system, where the ultimately good and just God must have an equally unjust and evil opposite number. The devil is a creature, part of creation, and thus subject to God as is all of creation.

I do believe in the manifestation of evil. I do not think we know much about it, I think the reality of "the devil" could be very different from what we imagine, or the caricature history has painted for us over the centuries, but I do believe that there is a tempter, a force for evil.

Modern Judaism holds that Satan in the Bible is merely 'the prosecutor' as he is portrayed in Job. However, you have to wonder why Jesus Himself taught the Apostles more than this about the devil? So much so that St. Peter, a Jew of course, could say: "Discipline yourselves, keep alert. Like a roaring lion your adversary the devil prowls around, looking for someone to devour." 1 Peter 5:8 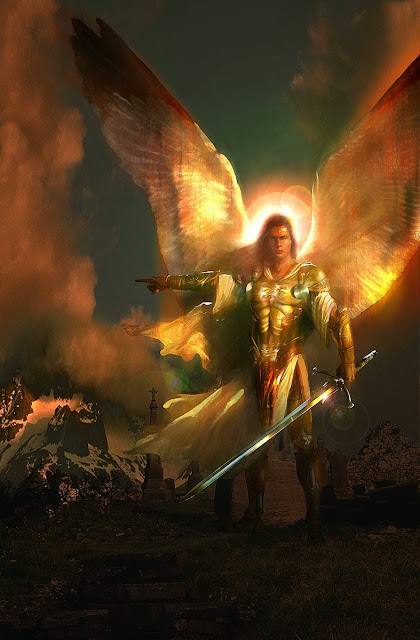 St. Michael the Archangel,
defend us in battle.
Be our defense against the wickedness and snares of the Devil.
May God rebuke him, we humbly pray,
and do thou,
O Prince of the heavenly hosts,
by the power of God,
thrust into hell Satan,
and all the evil spirits,
who prowl about the world
seeking the ruin of souls. Amen.
Pope Pope Francis satan the devil