Bishop Davies: Courage & Constancy Will Guarantee the Future of the Church

Courage and constancy will guarantee the future of the Church, says Bishop Davies 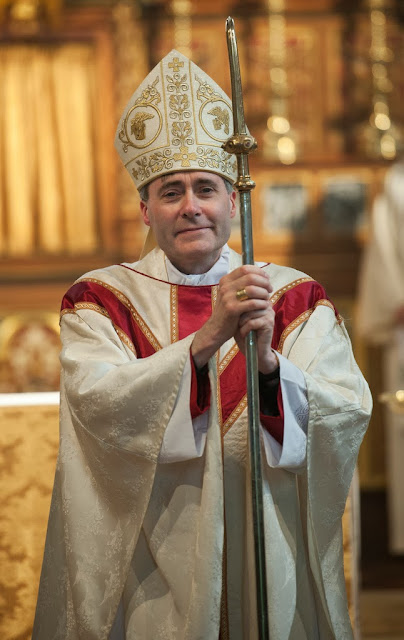 This Sunday, on the Feast of Christ the King, the wonderful Bishop of Shrewsbury will call on Catholics of the Diocese to profess their faith with “courage and constancy” amid a climate of increasing hostility towards Christianity in British life, according to the Diocese of Shrewsbury's website.

The Rt Rev. Mark Davies will say that he has “no doubt” that the future of the Church in this land depends on the commitment Catholics made to their faith today, in spite of the hardships that they might experience along the way. How wonderful to hear this important message articulated so clearly. Bishop Mark is absolutely correct in my opinion, as I have said on every possible forum, we need to start being more explicit about the Gospel and the message of what exactly the Christian faith is and does. It is not about making your own mind up, the Gospel is about knowing the truth and that truth setting us free (Jn 8:32).

In a pastoral letter due to be read in parishes this weekend to mark the close of the Year of Faith, the Bishop will acknowledge the “antagonism” Catholics can often experience when they try to express their faith.

He will say, however, that the martyrdom of contemporary Christians overseas, highlighted by the recent Aid to the Church in Need Report, “Persecuted and Forgotten”, ought to place such discomfort in perspective. I am a little bit gobsmacked that Bishop Mark has chosen to speak about these things the week I visited Tyburn, and had an opportunity to consider the incredibly difficult and courageous path of Christian martyrdom.

Bishop Mark states that unless Catholics profess their faith in Jesus Christ, the Church will become little more than a charitable non-governmental organisation, he will say, quoting Pope Francis. “When we do not confess Jesus Christ, we confess the worldliness of the devil,”. This makes perfect sense, and is a direct result of relativism, which dumbs down the powerful message of the Gospel.

Bishop Davies will say: “During this Year we have had several reminders of how Christians in many parts of the world face increasing threats of violence and intimidation in order to stand by Christ’s Cross. We are aware that during these same months, Christians have suffered violent deaths rather than renounce the name and the love of Christ. All this gives to our celebration of the Year of Faith a new perspective. It also gives perspective to the antagonism we can experience to the claims of Christ and to the witness of Christians in the life of our own society. This situation may at times tempt us to avoid speaking the name of Christ if it makes our contemporaries uneasy, to remove His Cross from view or to understate His claim of Kingship.

He will say: “It is the hour for our faith to be proved amid the continuing uproar around the Cross of the Lord … I have no doubt that the future of our Diocese will be decided by the courage and constancy of such faith.”

The Right Reverend Mark Davies was born in Manchester on 12th May 1959 and baptised at St Richard’s Church, Longsight.

Ordained to the priesthood by Bishop Thomas Holland of Salford on 11th February 1984 he served as an assistant priest at Our Lady of Grace, Prestwich, and St Mary’s, Swinton, before he was appointed private secretary to Archbishop Patrick Kelly (then Bishop of Salford) in 1988. From December 1992 until September 2003 the then Father Davies was parish priest of St. John Bosco, Manchester, and was also appointed Dean of North Manchester in 1999.

In January 2003 Bishop Terence Brain of Salford appointed the then Monsignor Davies as Vicar General of the Salford Diocese. As Vicar General he served as the parish priest of St Teresa Little Lever between 2003 and 2006, St Joseph Longsight between 2006 and 2007 and Holy Family, Wigan, between 2007 and 2009.

In December 2009 Pope Benedict XVI appointed Monsignor Davies as the Coadjutor Bishop of Shrewsbury. He was ordained Bishop on 22nd February 2010 at St Anthony’s, Wythenshawe, Manchester. On 1st October 2010 Bishop Davies became the 11th Bishop of Shrewsbury in succession to Bishop Brian Noble.

Thank God for Bishop Mark and is invaluable witness and ministry. He is a true pastor, feeding his flock good spiritual food. Please pray for him!