Pope Francis Practices What He Preaches

How God shows his love in and through Pope Francis!!!

As he 'tweeted' in August: "Lord, teach us to step outside ourselves. Teach us to go out into the streets and manifest your love." Then again in September: "True charity requires courage: let us overcome the fear of getting our hands dirty so as to help those in need."

So he practices what he preaches... Here he is, yesterday, locked in a loving embrace with a severely disfigured man afflicted with neurofibromatosis, a painful genetic disorder that causes thousands of tumors all over the body, and which leads to the loss of hearing and vision, as well as severe disabilities resulting from nerve damage from countless tumors. 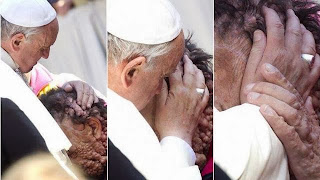 The Catholic Herald suggests that this photograph is Pope Francis’s real first ‘encyclical’. Karl Stuebe reports for the Herald from Rome that the widely circulated photo is an encyclical in the sense that the “message” of the Holy Father has been sent to all the bishops and their flocks (and in this case beyond). In this image we get a summing up of the tone which Francis wishes to set for the world Church. His Holiness wants the word “Pastor” to come to mind when the Catholics thinks of the office of Pope.

Fear not that the Chair of Peter is becoming common or familiar. The Holy Father sees the world as his parish rather than a realm or classroom. Francis iterates this by ease with which he communicates with his audiences. The wishing of a “good lunch” after the Sunday’s Angelus or when we were asked to pray for an ill child he had visited earlier. This view of a world parish has been taken because Francis thinks we need to view ourselves as parishioners. The Holy Father wants to guide a group of solid praying people who are strong in faith and conviction rather than militant moralists.

This is not mere outreach for the sake of sentiment; it is Francis showing us the fruit of faith in a way that is tangible and imitable. His way of showing is straightforward and demonstrates to us how easy it is for parishes to be pockets of this marvelous work of illuminating faith around our dark needy world.

Steube said on the night of his election that he would lead exactly as he did in Buenos Aires. He has been proven right but more importantly, Francis brought with him that wonderful sense of a strong, active and praying parish with him.

Lord, help us to love more like You, and Your vicar, Pope Francis.
Charity neurofibromatosis Pope Francis