The Entry of the Most Holy Theotókos into the Temple

Today is the Feast of The Presentation of the Blessed Virgin Mary, also known as The Entry of the Most Holy Theotókos into the Temple, in the East.This feast celebrates Mary’s “dedication” of herself to God from her infancy, inspired by the Holy Spirit, whose grace had filled her ever since her immaculate conception.

The feast is associated with an event recounted in the apocryphal Protoevangelium of James, which tells us how Mary's parents, Joachim and Anne, who had been childless, received a heavenly message that they would have a child. In thanksgiving for the gift of their daughter, they brought her, when still a child, to the Temple in Jerusalem to consecrate her to God. Later versions of the story (such as the Gospel of Pseudo-Matthew and the Gospel of the Nativity of Mary) tell us that Mary was taken to the Temple at around the age of three in fulfillment of a vow. Tradition held that she was to remain there to be educated in preparation for her role as Mother of God.

In Eastern Orthodox tradition, this is one of the days when women named Mary (Μαρία in Greek) and Despoina (Δέσποινα in Greek) celebrate their Name Day.

The passage from the The Protoevangelium of James that talks about this event is really quite beautiful:

And her months were added to the child. And the child was two years
old, and Joachim said: Let us take her up to the temple of the Lord, that
we may pay the vow that we have vowed, lest perchance the Lord send to us,
(10) and our offering be not received. And Anna said: Let us wait for the
third year, in order that the child may not seek for father or mother. And
Joachim said: So let us wait. And the child was three years old, and
Joachim said: Invite the daughters of the Hebrews that are undefiled, and
let them take each a lamp, and let them stand with the lamps burning, that
the child may not turn back, and her heart be captivated from the temple of
the Lord. And they did so until they went up into the temple of the Lord.
And the priest received her, and kissed her, and blessed her, saying: The
Lord has magnified thy name in all generations. In thee, on the last of the
days, the Lord will manifest His redemption to the sons of lsrael. And he
set her down upon the third step of the altar, and the Lord God sent grace
upon her; and she danced with her feet, and all the house of Israel loved
her.
8. And her parents went down marvelling, and praising the Lord God,
because the child had not turned back. And Mary was in the temple of the
Lord as if she were a dove that dwelt there, and she received food from the
hand of an angel 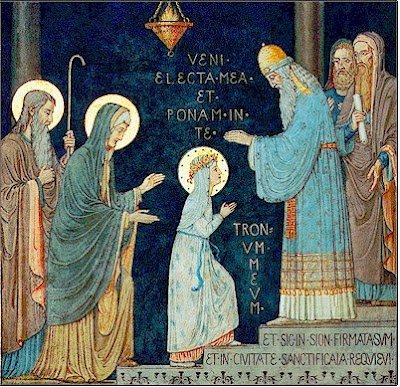