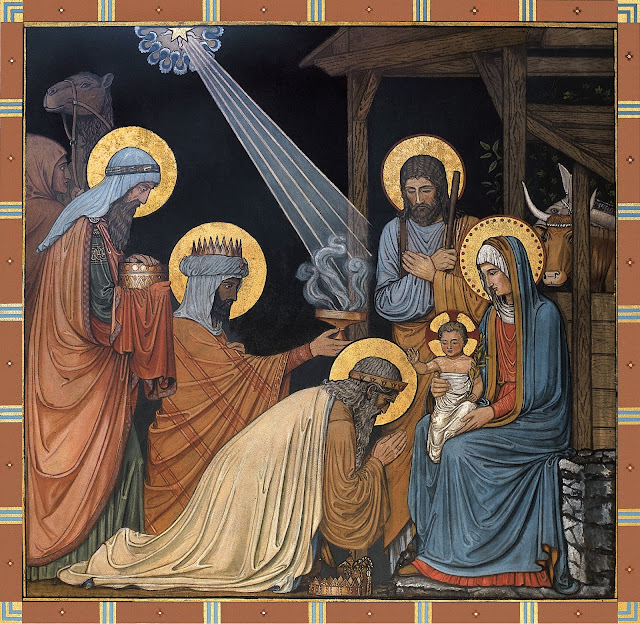 Epiphany is a great feast, one were we all can reflect on our search for God, just as the wise men did 2,000 years ago. Where do we find Christ today and what are the signs that point to Him?

The word "Epiphany" comes from the Koine Greek: ἐπιφάνεια, epiphaneia, "manifestation", "striking appearance" or "Theophany" Ancient Greek (ἡ) Θεοφάνεια, Τheophaneia, meaning "vision of God". It is the day when we celebrate the revelation of God the Son as a human being in Jesus Christ.

Epiphany is one of those great feasts that has lots and lots of meaning packed into the narrative. There's a lovely way of looking at it taught by Blessed Pope John Paul II that emanates from the very mystery of human faith. If we consider faith in God in the light of the Epiphany, we can see that far from having its starting point in nothingness, in plain self-deception, in fallible opinions or in uncertainty, it is based on the Word of God who cannot deceive or be deceived. Our faith is unceasingly built on the immovable rock of this Word. It is the search of the Magi under the guidance of a star, the search of which Pascal, taking up a phrase of St. Augustine, wrote so profoundly: “You would not be searching for me, if you had not found me.”

In his homily of 6th January 2008, Pope Benedict XVI said: The arrival in Bethlehem of the Magi from the East to adore the newborn Messiah is a sign of the manifestation of the universal King to the peoples and to all who seek the truth. It is the beginning of a movement opposed to that of Babel: from confusion to comprehension, from dispersion to reconciliation. Thus, we discern a link between Epiphany and Pentecost: if the Nativity of Christ, who is the Head, is also the Nativity of the Church, his Body, we can see the Magi as the peoples who join the remnant of Israel, foretelling the great sign of the “polyglot Church” that the Holy Spirit carried out 50 days after Easter. The faithful and tenacious love of God which is never lacking in his covenant from generation to generation is the “mystery” of which St Paul speaks in his Letters and in the passage from the Letter to the Ephesians which has just been proclaimed: the Apostle says that this mystery “was made known to me by revelation” (Eph. 3:3).