January 18, 2014
Apologies if I am a few days late, but I just wanted to add my congratulations to the chorus of well wishers offering their felicitations to Archbishop Vincent Nichols on his nomination to the sacred council of Cardinals. What an extreme honour and privilege this must be for him, and what an incredible and experience. The weight of history must really press down on you when you realise you are the next in line for this important role. 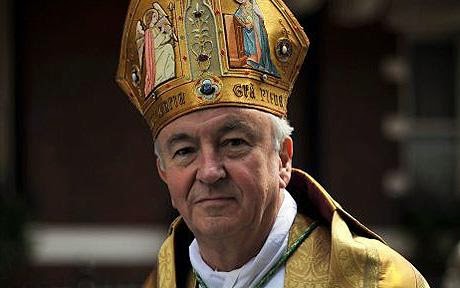 A Cardinal is not a type of holy orders (these are deacon, priest and bishop) but rather his is an honorific title which denotes the most senior clergymen (priests) in the Church below the Pope.

Although historically they were the local clergy of Rome, today they are Bishops of important ‘sees’ (dioceses) from throughout the world, or heads of departments of the Vatican, or some priests or bishops whom the Pope personally wishes to honour. The title of Cardinal is given by the Pope as a personal decision.

The word ‘cardinal’ comes from the Latin word for ‘hinge’ cardo, and denotes "principal" or "chief". The term was applied in this sense as early as the ninth century to the priests of the tituli (parishes) of the diocese of Rome. So in the Diocese of Rome, the important clergy were called ‘Cardinals’.

In the second and third centuries, it was only these bishops and senior priests and deacons of the parishes and pastoral areas of Rome who were the original Cardinals of the Church. Later, the title of Cardinal was given to important priests and bishops who worked for the Holy See (the Diocese of Rome), and later to bishops in Italy. In the Middle Ages the title was given to the senior bishops outside Italy, and eventually in the modern era, to senior bishops all over the world. Even so, the origins of the ‘College of Cardinals’ is seen in the division among the Cardinals into three ranks: Cardinal Bishops, Cardinal Priests and Cardinal Deacons (most are bishops despite being called Cardinal Priests or Cardinal Deacons). Generally, the Cardinal Bishops and Cardinal Deacons are members of the Roman Curia, heading the departments of the Holy See (often referred to as the ‘Vatican’). The Cardinal Priests are mostly the senior Archbishops of the world, e.g. Cardinal Cormac Murphy O’Connor who resides in England. Each has the title of an ancient Diocese in Rome (Cardinal Bishops), a Church in Rome (Cardinal Priests) or an area of the city of Rome (Cardinal Deacons). For example, Cardinal Murphy O’Connor’s titular church is “Santa Maria Sopra Minerva.” The senior Cardinal Bishop is the ‘Dean’ or head of the College (Cardinal Ratzinger held this position before being elected Pope), who presides at the election of a new Pope. The senior Cardinal Deacon is the Cardinal who announces the newly elected Pope to the world.

When a pope dies, the Cardinals administer the Church of Rome until a new Pope is elected and of course the world’s media is focussed on them during the election process for a new pope, who must be one of their number. During the reign of a Pope, the Cardinals act as a body of consulters to the Pope. Some of them are in charge of the various aspects of Church life. Others represent whole countries and regions of countries. Even those who are bishops of Dioceses will be expected to offer their service in the work of the Departments of the Holy See. For example, Cardinal Murphy O’Connor served in four different Vatican offices, including the Congregation for Divine Worship and the Discipline of the Sacraments, and the Pontifical Council for Promoting Christian Unity. From time to time, the Pope will bring the Cardinals together for a Consistory, to consult with them as a whole body. It is at these times that new Cardinals are named. Cardinals who are under 80 years of age are allowed to vote in the election of a new Pope. The maximum number set (though it can be changed by the Pope) of elector Cardinals is 120.

Archbishop Vincent his a great preacher and speaks really well on the faith. The last time I had the honour of hearing him was in Lourdes last summer, at a wonderful Mass at the grotto, where he concelebrated with Bishop Mark Davies of Shrewsbury diocese, Bishop Michael Campbell of Lancaster Diocese, and our own Bishop Thomas McMahon of Brentwood Diocese. There's a picture of him preaching here.

There's a really nice video of his initial reactions to his nomination here:

What is particularly beautiful is that our Cardinal-elect asks for our prayers as he undertakes this weighty role. Let us indeed pray that this honour may bring many blessings on the Church in England and Wales.