...But as Rorate Caeli tweeted this morning, not even the nice Pope can fake a smile when receiving anti-Catholic François Hollande: 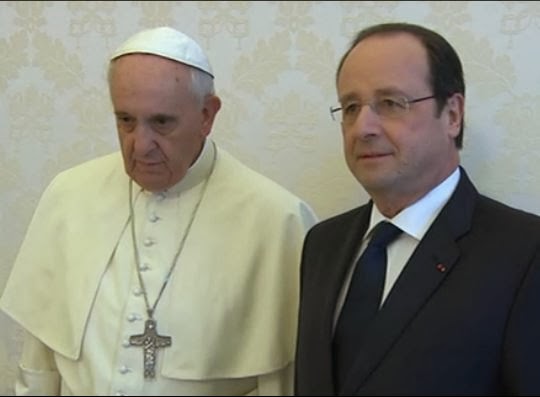 How I would love to hear what the Holy Father says to him! Having legalised same-sex "marriage", softened laws on abortion, and now vowing to explore a change to euthanasia, as well as allegedly being caught cheating on his wife (who had already cheated on someone else, or something...I'm so confused!!) Hollande may have some explaining to do.

Is this as shallow as some sort of ploy to woo back Catholic voters? Hollande is plagued by low popularity and it does seem likely that with this move he hopes to reconcile with a Catholic electorate largely hostile to his pseudo-liberal policies. Hollande's advisors have stated that he sees the visit as a chance to send "a strong message of dialogue and attention to the Catholics," I would imagine it will take more than a meeting with the Holy Father to achieve this however. Like acknowledging that Catholics are a part of French society too perhaps?

All this demonstrates perfectly what Rabbi Sacks explains about French society in his excellent book The Great Partnership, in that the French model is for the state to decide what is morally right and then enforce it on the population. This is the new liberalism which threatens to enslave us all and betray its own philosophical roots.

Who can forget the thousands of people (many sources say hundreds of thousands) who took to the streets to hold huge protests in France last year when the country legalised same-sex "weddings"? Apropos this meeting, 110,000 frustrated Catholics have signed a petition calling on the congenial Francis to get tough and raise their concerns with Hollande, and I don't think there's much doubt that he will. Vatican watchers say he is likely to press the Socialist leader on issues including changes to abortion legislation and a drive to legalise euthanasia.

"They will certainly not play hide-and-seek. There will be no holds barred," a high-ranking prelate told AFP on condition of anonymity.

I'm not anticipating it will be a punch-up, but Pope Francis' winning mix of mercy and justice could really reach out to Hollande and this meeting provides an opportunity for Francis to preach the Gospel to this morally bankrupt Frenchman. Pope Francis is no stranger to the confessional, and no doubt has years of experience of difficult conversations and communicating the all encompassing mercy of Christ. Let us all pray that Hollande hears the Holy Father's words and internalises them!