The Holy Name of Jesus

Pope Francis celebrated Mass this morning in the mother church of the Jesuit order, the church of the Gesù, to mark the Feast of the Holy Name of Jesus and to give thanks for the new Jesuit saint Pierre Favre.

Canonised by Pope Francis on 17th December, Pierre Favre, was the first companion of St. Ignatius of Loyola. For this reason he is known as “the second Jesuit” and one of the founders of the Society of Jesus, of which he was also the first priest. The tombs of St. Ignatius and St. Pierre Favre are located in the Church of the Most Holy Name of Jesus.

In his homily, the Holy Father spoke of the particular way in which the Jesuit Order is marked—and desires to be signed—by the name of Jesus:

“To march beneath the standard of His Cross.” 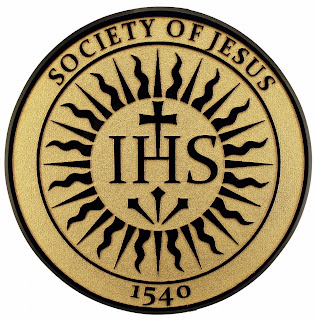 Pope Francis went on to explain that this means sharing in and having Christ’s very own sentiments.

Pope Francis went on to discuss the great example of his holy confrere, St Peter Faber,

“Under the guidance of St. Ignatius [the man who would become St Peter Faber, SJ] learned to combine his restless—but also sweet and even, exquisite sensitivity, with the ability to make decisions: he was a man of great desires, he recognised his desires and he owned them. Indeed, for Faber, it is precisely in the moment in which difficult things are proposed, that the true spirit that moves to action manifests itself. An authentic faith always implies a deep desire to change the world.”

Father Robert Barron commented: On today's feast of the Most Holy Name of Jesus, remember the words of our first pope:

"There is no salvation through anyone else, nor is there any other name under heaven given to the human race by which we are to be saved."

In Matthew's Gospel, 1:21, we hear how an angel of the Lord appeared to Joseph:

"Joseph, son of David, do not fear to take Mary your wife, for that which is conceived in her is of the Holy Spirit; she will bear a son, and you shall call his name Jesus, for he will save his people from their sins."

The Greek name Ἰησοῦς —Iesous is equivalent to the Hebrew name Joshua (Yehoshua), or Yeshua in Aramaic, meaning "Yahweh saves", or "Yahweh is salvation".. It was a popular name among first century Jews. The great preachers of the Church have emphasised that the name represents the person, and that when we do honour to the name of Jesus we acclaim him as truly the Saviour, as His name reveals. The significance of the relationship of the name to Joshua of the Old Testament is demonstrative of the fact that we are not saved by our own sword, or by our armies, but by God Himself, who scatters our enemies and brings us into the Promised Land. That is why it is one Joshua who leads the Children of Israel across the Jordan into Palestine (Joshua 3); it is another, together with the priests, who leads the returning exiles home after the Babylonian captivity (1 Ezra 3:2).

It is in the name of Jesus that we call upon the Father with utter confidence, for He Himself has promised 'Amen, amen I say to you, if you ask anything of the Father, He will give it you in my name. Hitherto you have asked nothing in my name; ask, and you will receive, that your joy may be full' (Jn 16:23-24). The Apostles did as Jesus said and invoked His name (Acts 3:6), and when the priests asked them: 'By what power or by what name did you do this?' they boldly answered: 'Be it known to you, and to all the people of Israel, that by the name of Jesus Christ, whom you crucified, whom God raised from the dead, by Him this man is standing before you well' (Acts 4:7; 10).

As Fr. Robert Barron reminds us, St. Peter was even bolder. He is glad to be able to invoke the name of Jesus, and see sickness dispersed, demons banished, the dead raised to life, but moreover, he continues to proclaim: 'there is no other name under heaven given among men by which we must be saved'. (Acts 4:12). Jesus Christ of Nazareth, and He alone, is the salvation of the Lord. He is not a Saviour only for Galileans. He is not a Saviour only for Jews. He comes to save all people of every tribe and race and people and language. No one is excluded from His saving work, because He is the new Adam, come to right the wrongs unleashed on the world by the Fall. Salvation through Him is offered 'to the Jew first, and also to the Greek' (Romans 1:16), and everyone of every nationality 'who calls upon the Lord will be saved' (Romans 10:13).

This is because Jesus is the Word incarnate. Just as Israel affirmed of old, 'The Lord our God is one Lord' (Deut 6:4), so the Word is 'the only begotten Son of the Father' (Jn 1:14). There is only one God; God is incarnate only once; only once and for all does Christ offer the supreme sacrifice on our behalf. His covenant is an eternal covenant, and of His reign there shall be no end. To look for any other name is to look for an Anti-Christ—and there have been false Christs in plenty. To say that His salvation is only for a few, only for one group or other, is to deny our common descent, and our common fraternity in Christ.