Arthur Roche (born 6 March 1950) is an English Archbishop of the Catholic Church. On 26 June 2012, he was named by Pope Benedict XVI to serve as the Secretary of the Congregation for Divine Worship and the Discipline of the Sacraments, at which time he was raised to his current rank.

Roche had served as the ninth Bishop of Leeds, having served previously as Coadjutor Bishop of Leeds and, before that, as an auxiliary bishop of the Archdiocese of Westminster.

It seems to have fallen to Archbishop Roche to be the latest person to have to try and interpret and explain Pope Francis. During a recent interview reported on CNA, the Archbishop spoke on the significance of the Latin Rite Mass, explaining that the Mass nourishes us, and that the special rite brings us together in a unique way.

Archbishop Roche is helping to organise a special conference commemorating the 50th anniversary of Pope Paul VI’s apostolic constitution Sacrosanctum Concilium in his role as the Secretary of the Congregation for Divine Worship.

I think you will all find what he has to say especially interesting in the light of the Butler Affair, where Fr. Butler is very circumspect in his quoting of the Constitution on the Sacred Liturgy:
Sacrosanctum Concilium is the Second Vatican Council’s Constitution on the Sacred Liturgy, which was promulgated by Pope Paul VI in 1963. It's aim is to foster a greater participation of lay people in the Mass by allowing them to hear the Gospel proclaimed in their own language. It also promoted a greater use of Gregorian chant.
During the conference, running from Feb. 18 – Feb. 20 and which has been organized by the Congregation for Divine Worship and the Discipline of the Sacraments, experts will discuss the impact the constitution has had in reforming the way the Mass was said in the 1950s.

Archbishop Roche makes some really important observations in this interview, for instance he stated that the most important thing is to keep the Eucharist at the center, because:


“the Eucharist itself creates community because it is Christ who shares himself abundantly. The act of worship is something that we do together for God. It is not something that is simply expressive of ourselves. It is expressive of our love for God; our response to his greatness, to his goodness for us, to the wonderful mercy that he gives to us.”

This is a powerful expression of the importance and centrality of the Eucharist. I think if we remember this, if we remember what the Eucharist is and it's place as the focus and centre of Christian life, it will naturally follow that we are more reverent and therefore get more from Mass. Archbishop Roche noted that if we maintain this view it creates community,


“because first of all, we attend Mass because we are in need. We are there because we need to be fed.”

Recalling how Jesus in the Gospel stated that “unless you eat of this bread, and drink of this blood, you shall not have life within you,” Archbishop Roche reiterated that “we go to be fed,” and “we go to become more like Christ, and that itself creates a wonderful communion.”

The Importance of The Latin Mass.
Speaking of the Latin Mass, the Archbishop said that it “will always be a part of the Roman rite” because it maintains “the language in which the Roman rite is written - whether it be the ordinary or indeed the extraordinary form.”

“It is the way in which the Church expresses itself,” he explained, observing how there has been an increase in use of Gregorian chant during Mass, “especially at international events.”

Despite what Fr. Butler and Tony Castle would have you believe about Vatican II, Sacrosanctum Concillium actually seeks to preserve and reinforce the importance of Latin in the Liturgy of the Church: here is Sacrosanctum Concilium section 36:


Particular law remaining in force, the use of the Latin language is to be preserved in the Latin rites.

As Dr. Joseph Shaw observes, you can't 'preserve' a thing by abolishing it. If you want to be faithful to the Council, you'd better attend a Mass in Latin!

Drawing attention to the special international reach of the city of Rome, Archbishop Roche went on to say that “people from throughout the world, from every continent and from the different hemispheres, come together to share Mass and are joined together in that common expression of the singing of the Latin part of the Mass.”

Turning his attention to Pope Francis' take on the rite, and perhaps referring to recent reports of comments made by the Holy Father, the Archbishop explained that “the Pope hasn’t expressed anything about the extraordinary form nor in fact about the ordinary form either.” However, he “is a very open man, as you know, and a very fair minded man,” the archbishop noted, and is someone who


“when he celebrates Mass, as is visibly seen, is taken up in what he is doing, is very attentive, and very recollected in the celebration of the Mass. And that’s the important thing, it’s the function of Peter to hold the Church in unity and he will be more aware of that than I am.”

I felt this was pretty much exactly what I was saying in my blog about liturgical fashions posted yesterday, so I am glad I'm on the right track with this. Certainly the whole idea expressed by Pope Benedict XVI through his writings and in Summorum Pontificum was expressly against any kind of division. Rather he wanted to open the treasure chest of the liturgy of our Tradition up for all of us to benefit from its richness. What a beautiful vision! Why on earth would you be against that? Yet some people are. Indeed, the Pope was very aware of this possibility as he, no doubt, was aware of the animosity leveled by some at the Traditions of the Church, having been part of Vatican II himself. This animosity is perfectly encapsulated by the aggressive approach of Catholics like Fr. Butler and Tony Castle. I know for a fact that these people are hugely concerned at the growing popularity of Masses which are taking place in the Extraordinary Form and in Latin. Indeed, they feel they need to be fighting against this resurgence of our beautiful and holy liturgy. They think that Pope Francis being selected is the start of the ‘tide changing’, but I would predict they will be sadly mistaken. They are soon going to discover that this is no mere fad or fashion, but rather a trend that has its roots in the work they have done, or failed to do over the last forty years or so, which has resulted in the truly awful state of the Liturgy, the lack of reverence, the dearth of catechesis, the awful music, evident in so many parishes. Those with good priests often feel over worked and undervalued, swamped by the amount of work they have to do without support. Butler et al can't support them, they are too busy picking at the wording of the new translation of the Roman Missal and openly asserting their defiance of the bishops!

In the meantime, the people are voting with their feet and their cars to find Masses that suit their tastes and sensibilities (i.e. are Catholic) and the Bishops cannot do anything about it. Market forces will prevail and for lousy liturgy and priests who think they are the author of The Mass and not the celebrant, the game is up. Let's face it, if forty-three years of suppression have failed to kill off the usus antiquior, and it's not so much the old that are hankering after what they remember, but rather the young are falling in love with it, what does that say for the traditional liturgy of the Latin Church?

I urge you, dear reader, be Catholic, be proud of our history and Tradition, do not put up with protestantised, dumbed down, or poor liturgy. It is your right to be able to benefit from the full power and beauty of the liturgy and history of our incredibly powerful faith, so vote with your feet-- abandon poor priests and poor liturgy and support good priests and good liturgy. This is the only way we will get the message through. 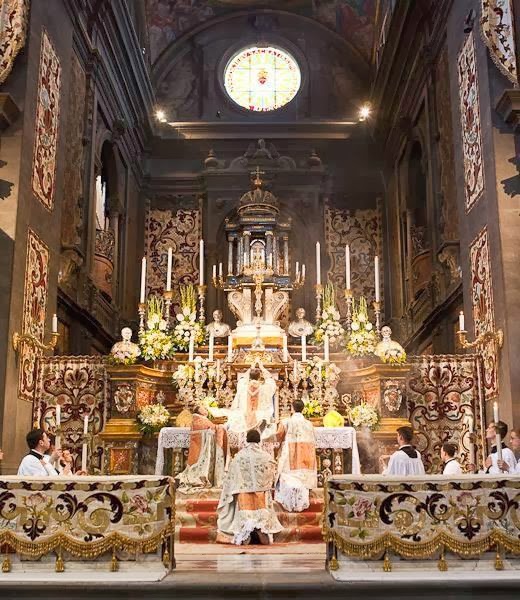