Louise and I had a lovely lunch on Sunday with my brothers from the Southend Circle of the Catenian's and their wives. We were joined by my son Michael as well, who wasn't terribly enthusiastic at the prospect initially, but pleasingly, said he really enjoyed the whole experience as we walked the dog together afterwards.

He bravely gave the after dinner speech to the gathering, a speech he has honed after several orations, the first of which took place in May last year. His speech is quite personal, and quite deep. It is about the experience of losing his sister in 2009, and how his faith has helped him, and indeed all of us to cope with this tragedy.

You can probably tell from the faces around the table that the speech doesn't pull many punches. I have read through an earlier draft, but have not heard him deliver it himself. Louise had warned me that I would find it difficult, but enthusiastic and proud of my son, I asserted that it would be fine. It wasn't. 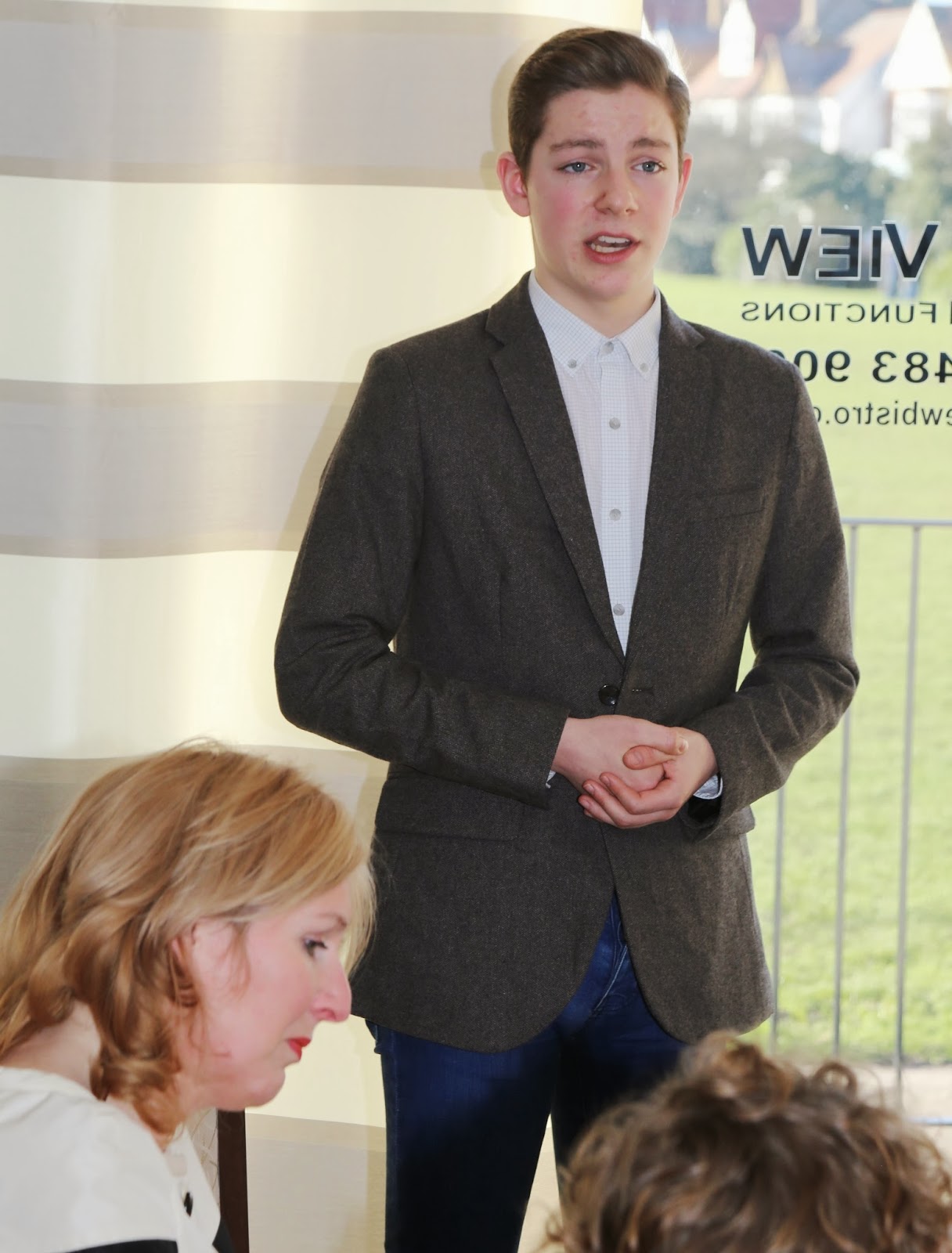 In the event, listening to someone I desperately love, talking about the experience of losing someone else I desperately love, was excruciating and today, I am still counting the cost in terms of mental equilibrium. Irrespective of that, I was very impressed with the speech itself, which is a very thoughtful and honest short reflection on the role of faith in the aftermath of immense personal tragedy. Michael spoke without notes and completely confidently, without a single stutter. I was so impressed, as were the whole gathering.

When he concluded, he was met with thunderous applause, which eventually died away to utter silence. I mean, you could hear a pin drop. No one knew what to say. Embarrassed, I tried to cut the silence by saying "Well that certainly killed the mood", laughter, and Tom, our Vice President broke in and moved the events on to the quiz and the raffle. There wasn't a dry eye in the house and even our esteemed President, a great bear of a man, was shedding a tear.

I wasn't quite aware of the effect the speech would have on the room. I spoke with our President, Paul, afterwards in an attempt to apologise if the material was somewhat inappropriate for what was, after all, a most joyous afternoon. Wisely, Paul assured me that this was not the case. Rather, it was an impressive soliloquy delivered by a smart and articulate young man, confident and knowledgeable in matters of faith and able to relate the belief he practices to real life events in quite stark relief. Its' content was true to life and gave an important message of the role of faith and family in dealing with the difficulties we face in life. Meat and gravy for a gathering of staunchly Catholic brothers and their families.

Michael and I went for a long walk together when we got home and we talked. We talked about a lot of things, but we talked about the speech and how he felt about it. Despite appearances to the contrary, he had found it difficult to deliver, and said that he hoped he would not have to do it again. One of Ruth's friends and classmates was on our table with her parents and when she realised what Mike was going to talk about, she appeared visibly upset. This in turn made Mike fill up. I think we all look at this little girl with great affection and also inquisitively. We know this is how old Ruth would be now and we all cannot help but wonder if this is what Ruth would be like now?

Hearing the speech somehow made real again for me the visceral pain felt by myself and my whole family most acutely in the aftermath of the accident. Not simply immediately afterwards, but for months and years afterwards. Even today, approaching the fifth anniversary of the events, the truth is we are only just beginning to feel that we can cope with the grief. It literally has been like a never ending climb out of a very deep, very dark hole, in which nothing else counted but the utter grief and pain and self-loathing you feel. Mikey was absolutely right in that what saved us from all that was our Catholic faith, the love of God, and the loving support of our community & friends and the birth of our darling daughter Mary.

Back to Sunday and we all soon regained our composure and enjoyed the quiz and the raffle. The Catenians support various charities and this event was in support of the President's Charity which this year is split between CAFOD and BCCS. We then rounded the afternoon off with a wonderful Valentine themed musical extravaganza from our dear friends the Stewart family. 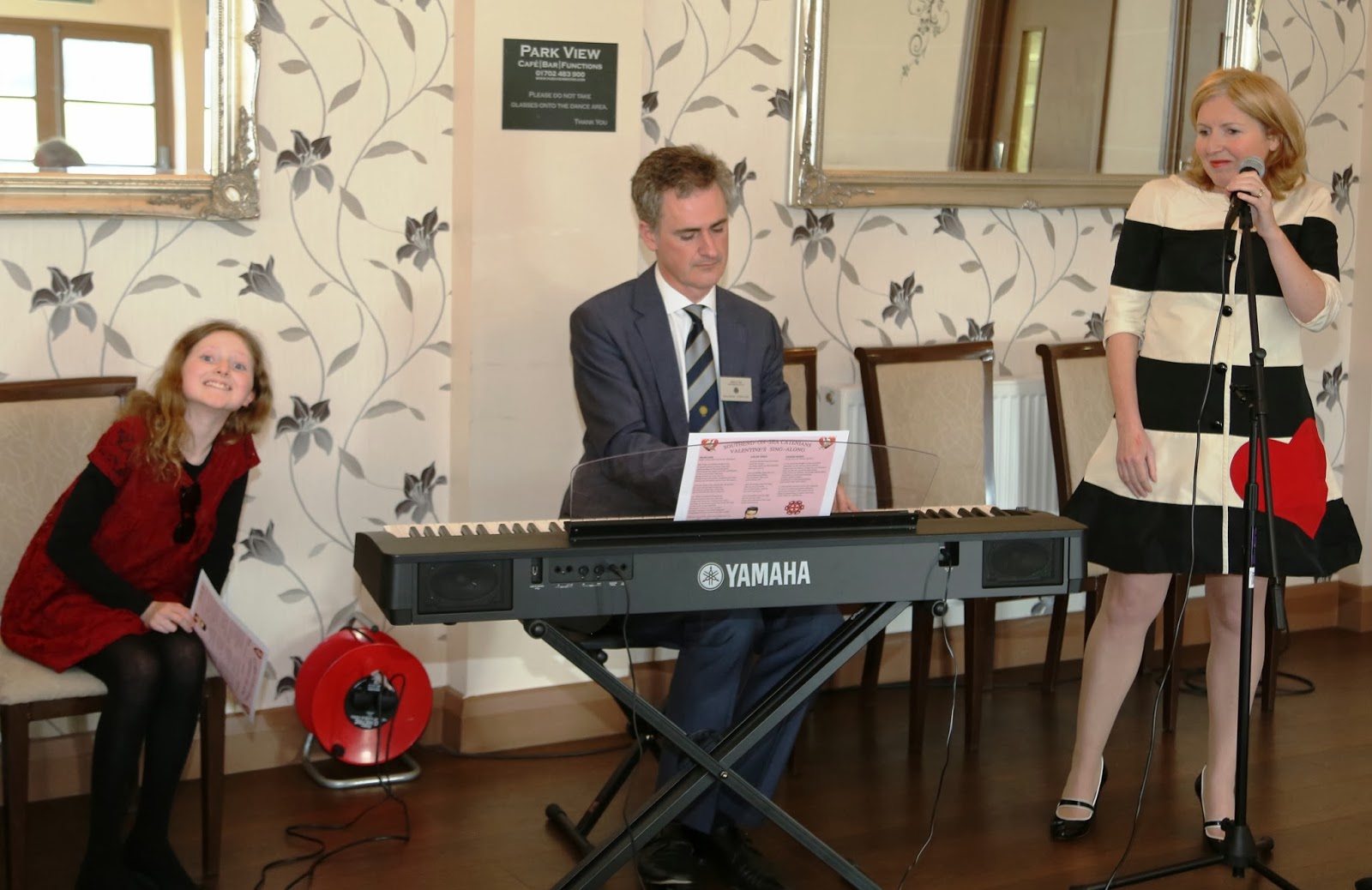 Matthew regaled us with the incredible story of meeting his lovely wife Annette, whilst playing piano in a bar in Corfu some twenty years ago. After just three days he proposed and she accepted. They then had to go back to their respective parents and explain the decision!

They ran through some of the old favourites they would sing together in Corfu, song sheets were distributed and we all joined in raucously. There was even a rendition of Arthur Askey's wonderful Bee Song, in honour of Brother Paul (El Presidente) who duly got up and provided with us with his own interpretation of the actions a la Arthur himself:

In my professional opinion, I think this was a risky move without a proper PPE and a full risk-assessment being performed before-hand, and had the HSE been in attendance, they probably would have shut down the whole association there and then! I have to leave Paul's performance to your imagination as I didn't have the foresight to catch it on video. Nor his proposal--or perhaps re-proposal, to his wife Jane, which, doubly romantically, involved a bunch of roses straight from the Supermarket (he assured us he had removed the price tag), and a box of Roses chocolates. He then proffered the following ballad for her consideration:

"I brings you Roses in the Summer,

And Roses in The Fall.

I always brings you Roses,

And you always eats 'em all".

Clearly the man is a literary genius and is wasted in the dentist/ bee-keeping professions!