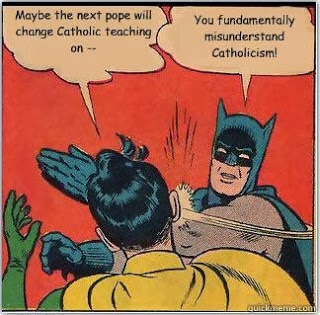 Fathers forgive me, for I am about to blog in anger.

How excruciatingly embarrassing for poor Bishop Thomas, at the precipice of a well earned retirement, Fr. Michael Butler, Chairman of Brentwood Diocese Liturgy Commission just will not shut up!

On Sunday last, he appeared on BBC Essex, allying himself with Southend Deanery's ACTA leader Tony Castle, in his attack on the New Translation of the Roman Missal. You can listen again to the whole programme here for another six days.

If you're not aware of the story so far, Fr. Butler penned a letter to The Tablet stating that it is legitimate for priests to ditch the new translation, and use the previous missal. Fr Butler’s public rejection of the authority of the Holy See and the Bishops’ Conference of England and Wales is in response to The Tablet’s report that ACTA have written to the Bishops’ Conference requesting that they drop the new translation. This was picked up by Protect The Pope.

It turned out that the Tablet only published an edited version of his letter. Frustrated, Fr. Butler emailed his full letter to every priest in the diocese.

Clearly embarrassed by this unilateral action, Bishop Thomas acted swiftly and firmly, disassociating himself and the diocese from Fr. Butler's disobedient and indeed maverick actions and making it clear that Fr. Butler acted without Bishop Thomas' permission or knowledge. This is the letter as reproduced on Father Z's blog: 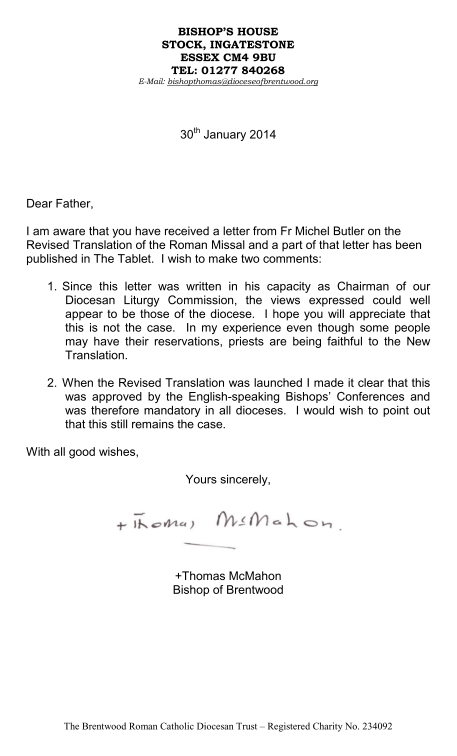 That's right FATHER Z's blog, one of the biggest Catholic Blogs out there. In fact, Fr. Butler has the honour of having featured on numerous websites, unanimously disagreeing with his position.

Father Z has featured him here, and here and takes a thorough look at Fr. Butler's claims about the New Translation.

Perhaps the most thorough intellectual fisking received by Fr. Butler's position was by Fr. John Hunwicke in three parts, the first of which you will find here. I strongly encourage you to read them all: Liturgists 1: Open Warfare, Liturgists 2: Burying Ratzinger, and Liturgists 3: Nice Old Gentlemen.

CC Father also found Fr. Butler's vocal dissent risible and felt is necessary to give it a thorough fisking.

And of course, we have already spoken about Protect the Pope.

I may have missed some, please do point them out!

Notwithstanding the clear rebuke by his boss, (as was commented by one erudite Brentwood priest, "one enjoying the appearance of having and one actually possessing authority in matters liturgical"  Fr. Butler now appears on the local radio station to reaffirm his disobedience!

If you take a moment or two to listen to the Peter Homes Show, you will hear, first of all, Tony Castle, introduced as Ecumenical Officer for the Diocese of Brentwood, interviewed over the telephone beginning at 02:02. The scene is set in that there is "growing discontent" with the New Translation, especially "obscure"terms like "consubstantial" and "and with your spirit". Tony explains that "this does not express what I want to say", in fact this language "drives away young people" (what??!!). No wonder the BBC ran with this story, Castle and Butler make it sound very dramatic!! Tony then hi-lights an American petition against the New Translation he supported and got involved in. Is he betraying links with American Call to Action that UK ACTA are so eager to disassociate themselves from?

Tony states firmly that "concerns are building" about the New Translation and says that he refuses to use it when he take communion out to the community. Of course we know that already, and I have addressed his position thoroughly. At 13:10, Tony plugs ACTA as "a strong movement in all the diocese of the country", errr all 1500 members. Sadly, he also states that it is supported by the bishops— bishops please note well!!!! These people are using you to convince the laity that dissent against you is a good thing. If you do not stand up and speak against them, you are like turkeys voting for Christmas. Remember what Pope Benedict told you:

"It is important to recognise dissent for what it is, and not to mistake it for a mature contribution to a balanced and wide-ranging debate."

At 15:13:00 Peter Holmes portrays Brentwood Vicar General, Mgr David Manson as somehow disingenuous in his retort to Fr. Butler's letter to The Tablet.

At 1:10:28 This position is repeated with Tony Castle's assertion about "growing discontent", then at 1:12:21 Fr. Butler's interview is broadcast. Fr. Butler suggests that the New Translation is not part of our background and says that the head of the committee which translated it does not even speak English. Fr. Butler says that the translation lacks the authority of Vatican II, because the council stated that "simple language" should be used "drawn up by a competent authority". Fr. Butler doesn't think the New Translation was drawn up properly and didn't follow what Vatican II had called for.

Fr. Butler explains that his own congregation don't get on with the New Translation, he thinks we should get the whole thing back to "Queen's English". He says that Pope Francis is aware of what is modern and usable. He also explains he doesn't even use the Nicene Creed, as it is far too long.

There's a redux of the whole thing at 2:50:00, where they desperately try to get someone interested.

Having scanned the whole show, and despite Peter Holmes efforts to get Catholic listeners to comment, I could not find a single commentator. It appears that not one listener called, emailed or tweeted on this subject. This perhaps is demonstrative of just how wrong and out of touch Butler & Castle are. The laity are not interested in your moaning gentlemen. We are happy with the New Translation. Sure it might not be perfect, but it is certainly better than what we had before!

There are far more weighty issues in the world than moaning about the New Translation of the Roman Missal boys. Most of us are getting on with those! It may not be terribly edifying to drag all this out in public, but they have dragged it out, now on the radio! If we don't do what we can to tell the real story, all people here are these loud mouths. Be honest, do you recognise the "growing discontent" they talk about regarding the liturgy? No. Nor do I.

I think I need to comment here because all we ever seem to hear are people like this, knocking the Church and moaning about ridiculous things. No wonder people are disengaged with the liturgy at Fr. Butler's Parish, he seems to have completely forgotten what it is all about!

Meanwhile, the reality is that there is a resurgence in Latin and the old Mass which is really making mssrs Butler, Castle, and co. twitchy. They don't like it, and they want to put a stop to it. You would think that after 40 years of tragedy in our churches, they would take an honest look at their legacy, and see that all they have wrought is fewer Mass goers, and a consistent dumbing down of the faith.

Seriously, where are these people. the Chairman of our Liturgy Commission, and the Ecumenical Officer, leading our diocese? Because I'll tell you one thing, it's not forwards!