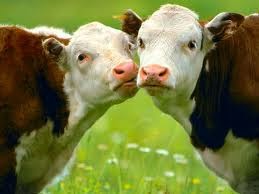 SOCIALISM
You have 2 cows.
You give one to your neighbour.

COMMUNISM
You have 2 cows.
The State takes both and gives you some milk.

FASCISM
You have 2 cows.
The State takes both and sells you some milk.

NAZISM
You have 2 cows.
The State takes both and shoots you.

BUREAUCRATISM
You have 2 cows.
The State takes both, shoots one, milks the other, and then throws the milk away.

TRADITIONAL CAPITALISM
You have two cows.
You sell one and buy a bull.
Your herd multiplies, and the economy
grows.
You sell them and retire on the income.

ROYAL BANK OF SCOTLAND (VENTURE) CAPITALISM
You have two cows.
You sell three of them to your publicly listed company, using letters of credit opened by your brother-in-law at the bank, then execute a debt/equity swap with an associated general offer so that you get all four cows back, with a tax exemption for five cows.
The milk rights of the six cows are transferred via an intermediary to a Cayman Island Company secretly owned by the majority shareholder who sells the rights to all seven cows back to your listed company.
The annual report says the company owns eight cows, with an option on one more.

You sell one cow to buy a new president of the United States , leaving you with nine cows. No balance sheet provided with the release.
The public then buys your bull.

SURREALISM
You have two giraffes.
The government requires you to take harmonica lessons.

AN AMERICAN CORPORATION
You have two cows.
You sell one, and force the other to produce the milk of four cows.
Later, you hire a consultant to analyse why the cow has dropped dead.

A FRENCH CORPORATION
You have two cows.
You go on strike, organise a riot, and block the roads, because you want three cows.

A JAPANESE CORPORATION
You have two cows.
You redesign them so they are one-tenth the size of an ordinary cow and produce twenty times the milk.
You then create a clever cow cartoon image called a Cowkimona and market it worldwide.

AN ITALIAN CORPORATION
You have two cows,
but you don't know where they are.
You decide to have lunch.

A SWISS CORPORATION
You have 5000 cows. None of them belong to you.
You charge the owners for storing them.

A CHINESE CORPORATION
You have two cows.
You have 300 people milking them.
You claim that you have full employment, and high bovine productivity.
You arrest the newsman who reported the real situation.

AN INDIAN CORPORATION
You have two cows.
You worship them.

A BRITISH CORPORATION
You have two cows.
Both are mad.

AN IRAQI CORPORATION
Everyone thinks you have lots of cows.
You tell them that you have none.
No-one believes you, so they bomb the ** out of you and invade your country.
You still have no cows, but at least you are now a Democracy.

AN AUSTRALIAN CORPORATION
You have two cows.
Business seems pretty good.
You close the office and go for a few beers to celebrate.

A NEW ZEALAND CORPORATION
You have two cows.
The one on the left looks very attractive...

A couple of late liturgical additions from Eccles:

ACTA RUN CORPORATION:.
You have 2 cows.
You think how nice it would be if they could be ordained.
No wonder they live in fear.
I blame the Vatican.

BRENTWOOD LITURGY COMMISSION RUN CORPORATION:
You have 2 cows.
You don't like them to say "Moo" but prefer the 1970s translation, "Baa".
Anyway no one understand "Moo" and it is driving the young people away.
Is anybody still listening?

ANGLICAN
You have 2 cows that want to marry.
You are unable to do this, but you bless their union.
They have no calves.