Bishop stands up against contraception! 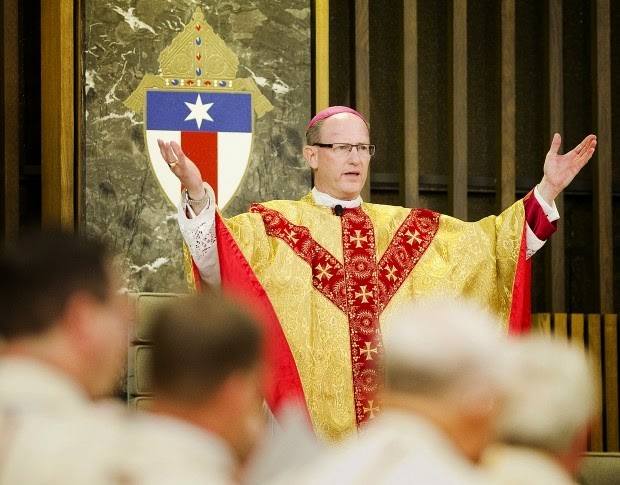 Deacon's Bench reports today that, twenty-three years ago, Bishop Glennon Flavin of Lincoln Diocese, USA, issued a letter to parishioners and physicians, decrying birth control as evil and immoral. He warned Catholic couples using contraception and the Catholic physicians prescribing it they were “committing grave sin.”

On Tuesday, Bishop James Conley issued his own letter to parishioners reaffirming the Catholic Church’s stance prohibiting the use of all contraceptives, although his pastoral letter goes to greater lengths to explain the teaching in gentle tones. I think it is very powerful that every priest in the diocese has been asked to discuss the letter and talk about contraception during Mass this weekend. Wow! +Conley said:

“We really live in a wounded world when it comes to the family,”

In a move that I think clearly demonstrates the reality of his gentle pastoral care for his flock, he explained how he chose to issue the letter during Lent because of its theme of love and sacrifice being the language of love.


“We live in a world short on love,” Conley writes in the letter. “Today, love is too often understood as romantic sentimentality, rather than unbreakable commitment. But sentimentality is unsatisfying...Love — real love — is about sacrifice and redemption, and hope.”

Deacon Greg contrasts Bishop Flavin’s letter, which took a strong, authoritative tone and called contraception “gravely immoral … intrinsically evil … contrary to the law of nature and nature’s God,” with Bishop Conley’s gentle explanation of the church’s stand against contraception as being based on understanding God who created marriage to be unifying and procreative, Conley writes.


“Our church has always taught that rejecting the gift of children erodes the love between husband and wife… The use of contraception gravely and seriously disrupts the sacrificial, holy and loving meaning of marriage itself.”

People who use contraception “diminish their power to unite,” Conley writes, “and they give up the opportunity to cooperate with God in the creation of life.”

Catholic News Agency covers the story in greater detail and reports how Bishop Conley said Paul VI’s 1968 encyclical “Humanae Vitae,” which rejected contraception as contrary to Christian ethics, had a “prophetic message” that was “good news for all Catholics, since we know that the contraceptive mentality has been so pervasive and so devastating.” He said he hopes that couples using contraception, and physicians prescribing it, will “think again” about their actions, and turn to “God’s tender mercy by making a good heartfelt confession.”

“We live in a world short on love,” he lamented. He is so right! I have always thought that this is a teaching so little understood by most people in the Church. One has to wonder why, and probably the most likely reason is that a celibate priesthood is often uncomfortable lecturing sexually active couples about their sexual activity. Many, perhaps even most couples dismiss the Church's teaching on contraception, often because they don't understand it, also because our mindset these days is much more geared to convenience than the true sacrifice that constitutes love. Of course, in reality, sexual intercourse is only a tiny part of what makes up a successful, loving marriage, but in a society that constantly portrays sexuality as all that is on anyone's mind all the time it seems little wonder that our perspectives have become warped somewhat.

Like most Catholic stuff, there's little doubt that the call to an honest adherence to Catholic teaching (fully explained here if you're interested) requires a degree of heroism and self sacrifice which may seem bizarre to the modern mindset. However there is no doubt that it has a powerful and valuable effect on a marriage, perhaps fundamentally born of a subconscious realisation that neither of you are using each other as an object of gratification. There is a deep, connective acknowledgement of your combined fragility and nakedness before God, who is truly part of your marriage in a real way.

Contraception may seem a small issue to those who want to justify their use of it, but in truth, I think that rejection of contraception opens a door to a proper understanding of the sacredness of life, children, marriage and even our relationship with God. Because it asks us whether we are prepared to have the kind of faith we need as the central core of our salvation, the kind of faith pointed to by the Covenant, the Law, circumcision, the Prophets and Abraham, and then directed by Jesus, or is our faith in fact conditional?