March 31, 2014
Monsignor Nicholas Hudson presently Parish Priest of the Sacred Heart, Wimbledon, has been appointed an Auxiliary Bishop of Westminster Diocese today. Sacred Heart was a Jesuit Parish, but due to a shortage of vocations in the Jesuits in Britain it was announced that the Society of Jesus was to hand over administration of the parish to the Archdiocese of Southwark and Mgr Nick was appointed Parish Priest to the Parish where he grew up. Indeed, his family lived just a few streets away from Sacred Heart, where he was baptised and ordained. 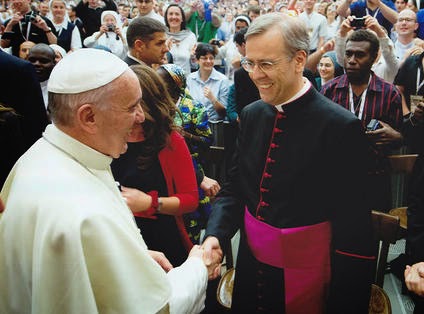 This appointment follows a spate of appointments over the last few weeks. Mgr Hudson was rector of the English College in Rome from 2004-2013 when he was replaced by Mgr Philip Whitmore. Mgr Hudson has long been rumoured for an appointment to an episcopacy, take this report in 2011 for example. I think this is because it is quite usual for the rector of a seminary to eventually be made a bishop.

1986
Ordained to the priesthood on 19 July 1986 by Archbishop Michael Bowen in the Church of the Sacred Heart, Wimbledon

1987-91
Assistant Priest in the Parish of St Thomas of Canterbury, Canterbury