I know what you're thinking..."What, another one?" The Church of England seems to be consuming itself over various issues which ultimately boil down to the capitulation of the Gospel to the whim of temporality. 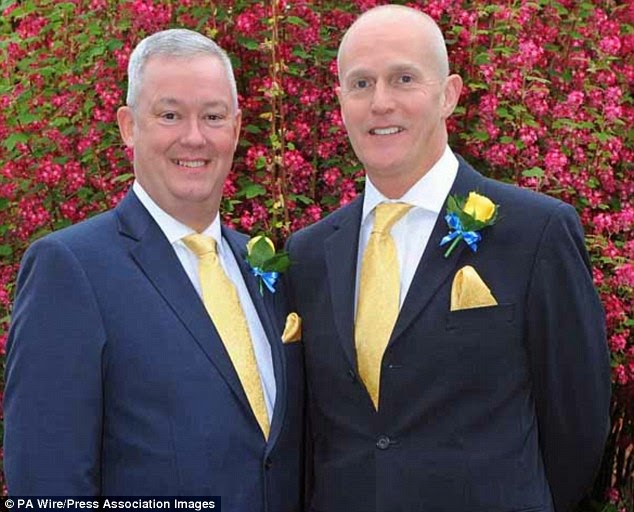 The headlines today, Palm Sunday, sadly, instead of reflecting on the powerful message of sacrificial love that is the Christian story, reflect the selfishness of one man who puts himself before his duty as a minister of religion, an employee of the Church of England, a servant of the Word, and even God.

Jeremy Pemberton has been a priest since 1981 and has worked in the north of England, DR Congo and Cambridgeshire. He was an honorary canon of Ely Cathedral and is a canon of Boga Cathedral. He is divorced, has five children, and now lives and works in Nottinghamshire as a community healthcare chaplain and a lay clerk at Southwell Minster. Yesterday he became the first to defy his church's ban on gay clergy marrying.

I don't want to appear judgemental, but I can't help but bow my head in shame for someone who is supposed to teach the Law of God and yet seems so wrapped up in his own sexual desires and confusion, that he is comfortable, it seems, just doing whatever he wants, irrespective of the consequences for his quite extensive family, those he ministers to, society at large, or the Anglican church itself.

Surely this is what the Genesis story is all about; God says what is right and what is wrong, but the devil tempts humanity, saying that we can know for ourselves what is right and wrong. Hasn't Jeremy Pemberton reached for the fruit of the tree of the knowledge of good and evil? Hasn't he decided to ignore the constant tradition of the Christian faith he purports to hold and teach and replaced it with a meme? Isn't he willing to substitute his own beliefs for the revealed one he is supposed to be preaching?

The Mail reports him as saying:

"That’s what I want. It is the same as anyone who wants to get married."

Surely this is nothing other than selfishness? Is that what anyone else who gets married wants? When I got married, I wanted children, I wanted to honour my wife, I wanted to make a public commitment to the woman I would raise a family with.

Of course this fellow has already done that. Then divorced his wife. Now he is marrying a bloke. Because he wants to...And we're all OK with that?? Five children later he seems to have decided that he wanted something entirely different.

The Mail reports that Justin Welby (the archbishop of Canterbury) defended the policy in a radio interview last week, saying that if the Church accepted gay marriage it could be ‘catastrophic’ for Christians in Africa, hundreds of whom had been killed by people who associated Christianity with homosexuality. I am personally troubled with this defence. I don't doubt the truth of it, but it is pure Utiliarianism, as well as an attempt, it seems to me, to label the persecuting Africans as varelse, (to refer to Demosthenes Hierarchy of Exclusion). A better argument for the Anglican decision (surely) would be to condemn what is wrong as wrong, and to embrace what is right as right? If we, as Christians and followers of The Word who is Truth, cannot, at this stage of human development, accurately identify right from wrong, I have to ask what the point is?

Personally, the fact that this chap is already divorced, and bearing in mind Jesus teaching on that, I am wondering how he can even be a priest? If something like that happened to me, as it does in life, I would want to run away and hide, because it would be clear that something had gone very wrong. It would be utterly contradictory to everything I believe to parade it around in front of others in such a way.

Damian Thompson suggests the punishment facing Mr Pemberton might be the withdrawal of his licence to officiate at services as he doesn't have a parish. Damian goes on to note that technically he could be defrocked, but that would involve a messy legal process… by which time other priests will have tied the knot.

I don't know, it's all very sad, and leads me to believe that the Anglican communion cannot be saved. Ultimately, those who hold to Scripture and what the Christian Church has consistently and authoritatively taught, while embracing our brothers and sisters with SSA, will never be able to accept homosexual acts as normative. The Catholic perspective is clearly spelled out by the CDF here. The progressive elements of the Anglican communion will never bow to traditionalism, and will continue to push forward, eroding the boundaries of what constitutes Christianity until it no longer is at all recognisable as such.

Damain Thompson concludes his article with the following reflection:

How big a crisis will this cause? The Anglican Communion is dead already, so that's one thing the Archbishop of Canterbury shouldn't worry about. In the long run, I suspect that the law will be changed so parishes can opt out of having anything to do with gay weddings. Clergy and worshippers who are unhappy with (or not certain about) same-sex marriage, and therefore married gay priests, will adjust to the idea over time. Traditionalists will (a) die out (b) leave or (c) invoke the aforementioned opt-out clause.

Meanwhile, liberal Roman Catholics such as Stephen Hough will derive encouragement from these developments and anticipate the day when all Catholics are free to marry their gay partners. That won't happen, so – at the risk of sounding presumptuous – they may as well become Anglicans now.