Doll, Kitten and Brynn, from Massachusetts, were joined together in a marriage-style ceremony last August and are expecting a daughter in July.

Kitten, 27, is pregnant after undergoing IVF treatment using an anonymous sperm donor, and the trio eventually plan to have three children - one for each of them.

Obviously, us stiff, conservative, difference-hating, Christian folk find it disgusting on various different levels and are expressing our disgust vocally. I posted the article on my Facebook page without any comment, interested to see the variety of reactions, aware that I have a variety of friends, with very different perspectives. Here are some of the responses: 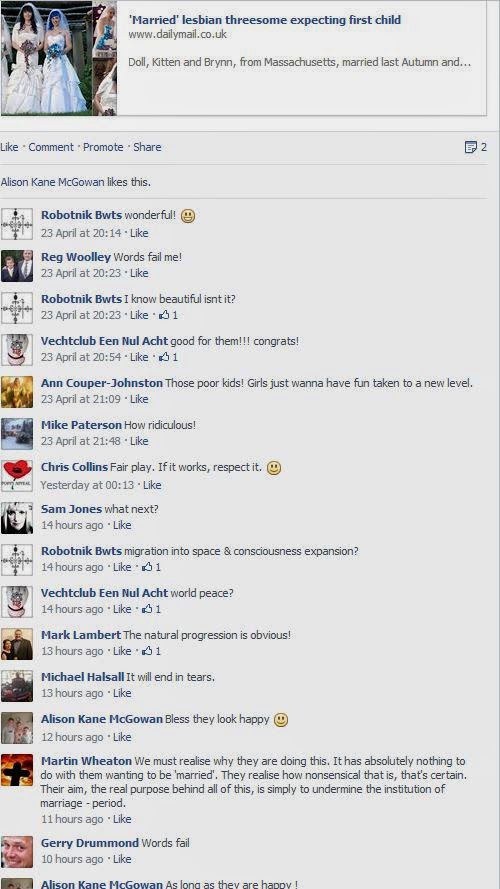 In the spirit of Aristotle's assertion that "It is the mark of an educated mind to be able to entertain a thought without accepting it." I think I do understand both sides of this debate.

I think the situation is that Niek, Chris & Nik (and Alison perhaps) are saying several things about the way society involves itself in things that really are none of it's business - i.e., personal relationships.

This story speaks of an opening of attitudes which breaks through the damaging barriers of social convention which ostracise some people who dare to break with convention and are true to their feelings and pursue their desires honestly. Lots of people are a little "different" in some way. People who may not share the rigid moral constraints of any particular religious society, be it Christian/ Muslim/ Hindu/ Buddhist/ whatever.

If we can, as a species, grow beyond our personal prejudices and fears of what is foreign to the extent that we are able to except other people and love them, despite their different approaches to life, we will learn, as a species, to exceed our own petty differences and, well, literally reach for the stars. Unite in a single goal.

A big part of this is the freedom to pursue your own personal happiness. Religion tends to restrict this pursuit and limit your horizons to one specific model of the universe.

Would that be a fair assessment?

From the other perspective, there is deep concern based on a long view of history and a particular perspective on what works in society and what demonstrably, does not work.

Far from limiting my freedom, pursuit of happiness, and understanding of the universe, my faith is the tool that explains my individualism in the context of that universe. The integration of the particular and the universal is the journey of life we are all on; an attempt to answer the big questions of who am I and why am I here.

From a range of experiences, I have concluded, along with the Church, that happiness comes from a proper understanding of freedom. A freedom which is necessarily contextual, just as we are necessarily contingent beings, so our individuality necessarily exists within relationship. Society is about the way we manage those relationships, the way we integrate with each of the people we journey with.

Anyone and everyone (should) have a fundamental idea about how and why this works. We all have an intrinsic sense of what is required: respect, freedom, trust, an acknowledgement of the fundamental dignity of the human person. In its simplest form, although it can be found in some form in almost every ethical tradition (emphasising the principle of the universality of revelation), Christianity claims it for itself and explains this as the "golden rule":

"Do to others what you want them to do to you. This is the meaning of the law of Moses and the teaching of the prophets" - Mt 7:12.

Of course, the rule is not one of reciprocity but of unqualified altruism and love in the imitation of the divine and presents a summary of the Torah. For example, it is equally expressed in two Old Testament edicts, found in Leviticus 19:18 ("Forget about the wrong things people do to you, and do not try to get even. Love your neighbor as you love yourself.") and Leviticus 19:34 ("But treat them just as you treat your own citizens. Love foreigners as you love yourselves, because you were foreigners one time in Egypt. I am the Lord your God.").

The Old Testament Deuterocanonical books of Tobit and Sirach also express a negative form of the golden rule:

"Recognise that your neighbor feels as you do, and keep in mind your own dislikes."—Sirach 31:15

So what we can learn is that we live in a network of relationships and that everything we do is therefore everyone else's business, because, whether we like it or not, it effects everyone else.

Part of the problem is the incredible arrogance modernity tends to display regarding progressive ideas. This could be labelled a lack of humility before history. The confidence with which some pronounce society changing policies demonstrates their successful seduction by what Hayek termed 'the fatal conceit'; the idea that we know better than our ancestors, that we can consistently determine the consequences better than those who went before us, circumvent the prohibitions they observed, and yet somehow achieve what they did not achieve (see: Friedrich A Von Hayek & William Warren Bartley, The Fatal Conceit: The Errors of Socialism, (Chicago: Chicago Press, 1989).) But we all know that the truth is, there's nothing new under the sun.


The reality of the matter is that society introduced marriage and bound it with ritual and furnished it an honourable institution in order to better foster cohesion and civilisation. This institution grew as society grew. Civilisation became a preferred method of living, marriage served to protect children foster better relationships between individuals, regularise potentially problematic sanguinal relationships and generally aided the progress of humanity. It is easy to look on these developments as old fashioned. It is a simple thing to abandon them and return to baser, more animalistic modes of living. Indeed, this is what we are witnessing today. If we do embrace the dismantling of the structures society has learned for its furtherance, we must not then be surprised when we face the consequences: feral youth, widespread abuse, insecurity and abandonment in old age, etc.. etc.. At some point people will realise why others fought so hard for marriage-- till then the lunacy reigns...