April 23, 2014
One of the traits of the lack-lustre, post Vatican II, happy-clappy, change the Church movement, is a conviction that the Church is dying and in desperate decline. They suggest the answer to this decline is more "Spirit of Vatican II" type changes, in other words, just the sort of thing which has done the damage up to now.

The talk is always of "managing the decline", indicative of a defeatist attitude which capitulates the faith in the face of changing societal mores which it sees as undefeatable. This is one example of this capitulation and the effect it is already having on the Church at large.

In the face of this depressing trend, we find the orthodox, faithful, Catholics, who really understand what it is all about in terms of humility before almighty God, support for His Church, against which the gates of hell shall never prevail, and the realisation that with Him, all things are possible. In orthodox parishes, attendance is high, involvement is high, revenue is up. In orthodox orders, vocations are on the increase. The Pope John Paul II and Pope Benedict XVI generation of new young priests are now filtering into our diocese's and loving the liturgy, loving the people, and finding these things reap rewards.

If you don't care, why should anyone else care?

Meanwhile, one has to wonder how badly things have to fail before the "Spirit of Vatican II" generation realise what a God-awful mess they've made of everything? That there are fewer vocations hardly seems surprising if we are going to teach a relative theology that depends largely on conscience. How can we expect our young men and women to dedicate their whole lives to that?

As Francis Phillips explains it in The Catholic Herald this week:


...faithful bishops leading faithful dioceses attract more young men to the priesthood than dioceses where strong Catholic episcopal leadership appears to be weak and which seem to be run by committees.

In support of this contention, the book quotes the retired Archbishop Elden Curtiss of Omaha, Nebraska, who published an article in 1996, entitled “Crisis in Vocation?”, in which he wrote, “When dioceses and religious communities are unambiguous about the ordained priesthood and vowed religious life; where there is strong support for vocations, and a minimum of dissent about the male celibate priesthood and religious life, loyal to the Magisterium; when the bishop, priests, Religious and lay people are united in a vocation ministry – then there are documented increases in the number of candidates who respond to the call.”

The book mentions among others, Archbishop Carlson of St Louis who has worked tirelessly to build up the priesthood in the dioceses he has served. When he was Bishop of Saginaw, he named himself as director of vocations, an action that convinced young men in the diocese that “vocations are a top priority.” In addition, the bishop has established the “Operation Andrew” programme: a series of informal dinners, hosted by diocesan priests, in which a small group of young men considering a vocation meet with the bishop. Other dioceses have started similar initiatives.

I found it very encouraging, then, to hear this announcement from Shrewsbury's Bishop Mark Davies:

On the diocese website, we read that Bishop Davies noted a “crisis of vocation” in the priesthood, religious life and also in marriage, and compared such changes in the life of the Church to changes in the natural environment. 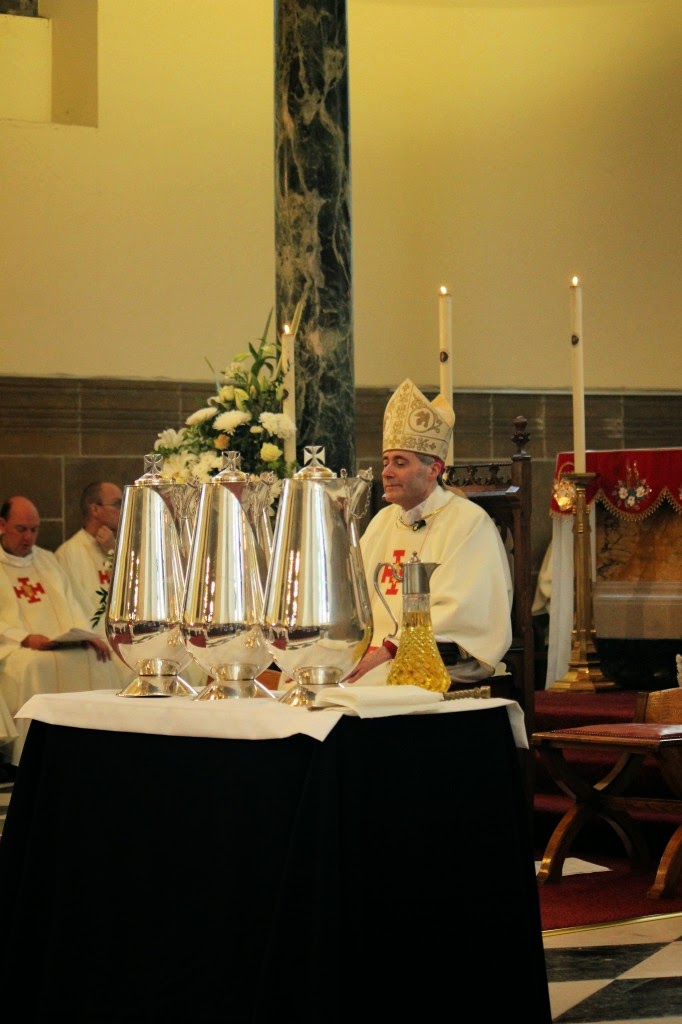 He said, however, that the crisis is neither inexplicable nor irreversible and suggested that it can be overcome by prayer, by encouragement and by a renewed love for the priestly vocation.

“In the natural world when we notice life disappearing we are alert to the problems of the environment: the state of the water, the soil or the air. Likewise in the supernatural order if these vital signs of life in the vocations of marriage, consecrated life and the priesthood die away in a local church we also must be alert to the environment. Half a century ago the Second Vatican Council recognised the link between how you and I live our vocations and how new vocations are encouraged in the Church.

“The Council declared the responsibility for fostering vocations rests with the whole Christian community. We promote vocations, above all, the Council taught by ‘living fully Christian lives’. It is where faith is put first, where commitment, sacrifice and generous self-giving are valued an environment is created where vocations can flourish.

“We must in this way make our own ‘climate change’ in order to encourage a new generation of vocations in the Church. Today when we are often reminded of our responsibility for the natural world we must also recognise our part in looking after the supernatural environment of faith and love within which each new generation grows. Each of us has a part in making an environment where vocations can flourish. “

“The Second Vatican Council reminded us we each have a role in encouraging, offering courage to the young in responding to their calling. At Shrewsbury Cathedral we are going to establish as a diocese a ‘house for discernment’ for men considering a vocation to the priesthood.

“This house will formally open its doors in September 2015 creating a community at the heart of our diocese where the vocation to priesthood can be actively discerned and supported within a year-long programme. I entrust this venture to your prayers and to the prayer and protection of Our Lady, Help of Christians and of St John Vianney.”

Bishop Davies recognises that the times are changing with regard to vocation and states:

At present, the Diocese has eight seminarians, 111 priests (including 28 retired), 98 parishes, 121 churches. These figures show how much work there is to do. Thank God that Bishop Davies is there encouraging vocations.

How wonderfully refreshing and encouraging this initiative is! There is already a discernible groundswell of support for Bishop Davies, and no doubt this initiative will reap tangible rewards in due course. As Francis Phillips notes;

This is the kind of leadership that lay people welcome – indeed long for. We love the Church, we love the Mass and we love our priests. We don’t welcome an increase in lay Eucharistic services as a “sign of the Holy Spirit at work”, as is sometimes said. Jesus said “The harvest is ready” – as it always is. When he added “the labourers are few”, it was a call, a summons, a plea for evangelisation. The Diocese of Shrewsbury, under the determined leadership of Bishop Davies, is responding to that call of Christ. Let’s hope other dioceses will be inspired to start similar initiatives.