April 16, 2014
Since the news of his appointment,  the days have been largely full of prayers of thanksgiving and information sharing regarding our new bishop, Alan Williams.


I could not help but observe that there seemed to be a lot of non-plussed clergy out there to start off with. Alan who? No one had heard of him! The appointment was described as "a surprise", "a shock". But for those who know Walsingham, England's Nazareth, there was no shock, for they knew Fr. Alan very well.

In 1893, Pope Leo XIII made a pronouncement. Some might even call it a prophesy, when he asked the English Bishops to consecrate their country to Mary, the Mother of God, recalling the ancient title the land enjoyed of being “Our Lady’s Dowry”.

When England returns to Walsingham, Our Lady will return to England.


This claim, to be Our Lady’s Dower, or Dowry—confirmed by Pope Leo XIII in 1893—is an extraordinary one, shared by no other land. Neglected, forgotten, even scorned, but still prayed for and hymned in both Catholic and Anglican denominations at various levels, this is possibly the source of that sense of England being “special” that gave rise to such stirring poems as William Blake’s “Jerusalem” and informed Shakespeare’s incredibly patriotic verse: "This blessed plot, this earth, this realm, this England”.

Perhaps the reason Bishop-elect William's appointment was such a shock, has something to do with how few of us have visited Walsingham? Certainly I am guilty of this myself, only visiting England's Nazareth myself for the first time ever this year, as I reported in two posts here, and here, where you can read the story of Walsingham and some of its very interesting history.

However, Alan Williams is very well known to many, many Catholics who are devotees of Walsingham and make pilgrimage there. 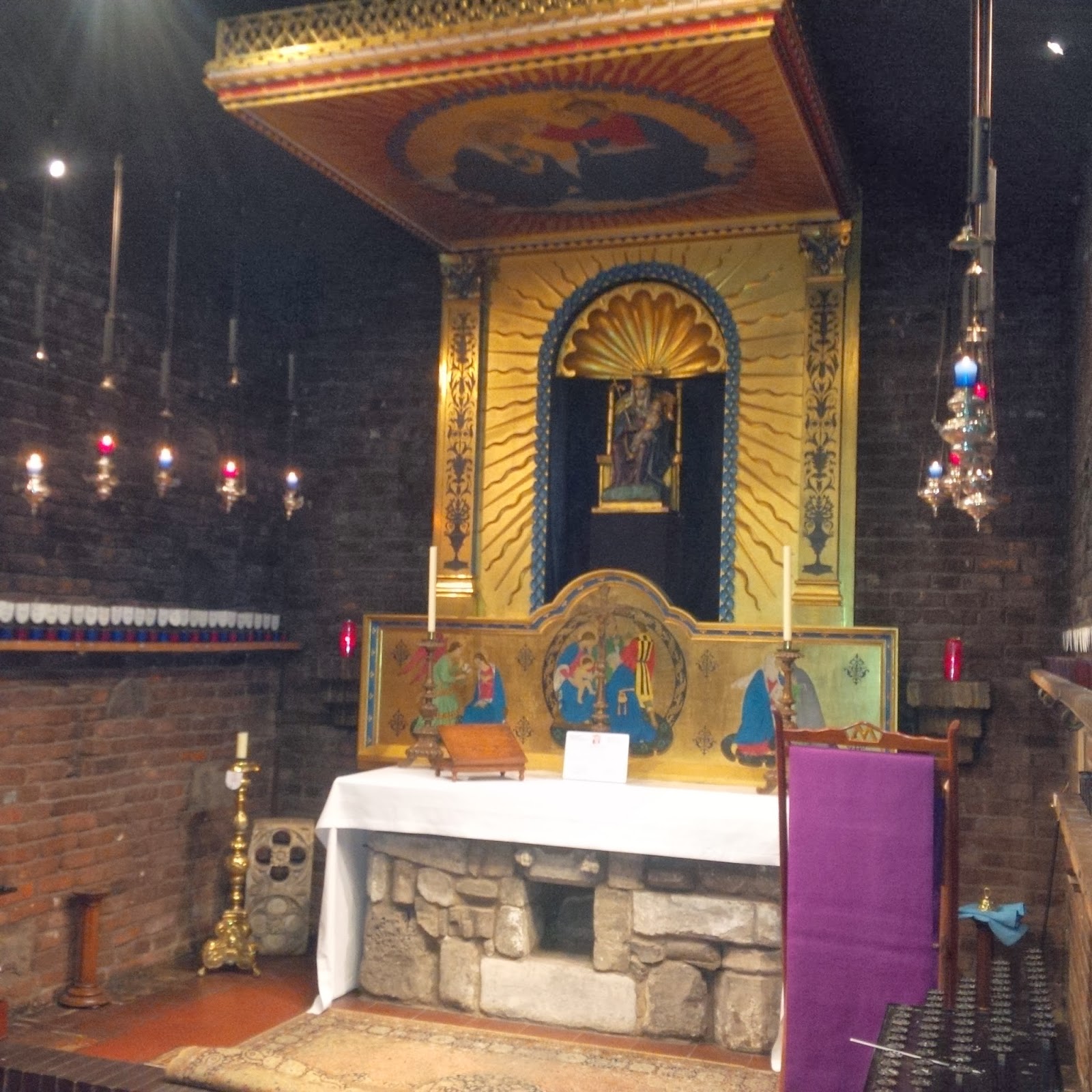 There is also the Community of Our Lady of Walsingham a Marian community who are modelled after and inspired by the prayer of the Carmelites with the poverty of the Franciscans, the zeal for truth of the Dominicans and the liturgy of the Benedictines. They are dedicated to Our Lady of Walsingham who pray for the conversion of Great Britain and the western world and are engaged in the New Evangelisation. They run the diocesan house of prayer; Abbotswick, but obviously have a strong connection to Walsingham.

They comment on the appointment of our new bishop as follows:


We are so happy to know that Pope Francis has appointed Father Alan Williams SM, currently the Director of the National Shrine of Our Lady at Walsingham, as the seventh Bishop of Brentwood. Now we have two dioceses, that of Brentwood and that of East Anglia, headed by men who have a deep love for Our Lady of Walsingham. That couldn’t be better news for our little community. Mary is really moving things in England, her dowry. It also confirms our hunch that God is truly at work on the bigger picture (COLW being only a small part of this) and slowly but surely we will get more glimpses of the many graces he has destined for our land and beyond.

We are also blessed with more priests of the Ordinariate of Our Lady of Walsingham than any other diocese. Obviously the name of the Personal Ordinariate provides insight into the special place England's Nazareth has in the spirituality of these men. This was made clear to me on my recent retreat there with my friend Fr. Jeff Woolnough.


When England returns to Walsingham, Our Lady will return to England.


Can you see how I am joining the dots here?

So what does this particular spirituality mean? Dedication to Our Lady always points us to Christ, but in a way that informs us about His mission and its essential link with her (and thus our) humanity. She is the nexus mysteriorum interse and when you study theology, you can gain important insight into the Christological mysteries by considering them in their context to Mary.

This is because Mary's motherhood has a profound effect in the manner of the Incarnation: the Word becomes flesh not in an abstract way but by sharing with his fellow men the fact of being conceived and born of a woman (and thereby sharing filiation towards a mother). In this connexion both the bulls Ineffibilis Deus and Munificentissimus Deus and the Second vatican Council are making an important point when they say that the Blessed Virgin was predestined as Mother of God in the original decree of the Incarnation—thus taking it that the Incarnation of the Word and the maternity of Mary are linked.

At the same time, Mary being Mother of God implies that she shares most intimately and intensely in Christ's holiness and in His work of redemption. Thus, Mary throws light on the very essence of the Redemption, just as the Redemption explains the theological essence of her motherhood. When we speak of Mary's motherhood we are, therefore, going much further than simply asserting that she gave birth to Jesus. mary is rightfully called the Mother of the Redeemer, because it was as such that she conceived Jesus, gave birth to Him and was with Him right throughout His life, Mary is the a mother in the fullest sense of the word:

"The daughter of Adam, Mary, consenting to the work of God, became the Mother of Jesus. Committing herself wholeheartedly and impeded by no sin to God's saving will, she devoted herself totally, as a handmaid of the Lord, to the person and word of her Son, under and with Him, serving the mystery of Redemption, by the grace of almighty God." —Lumen Gentium n. 56.

Mary's motherhood is not only the cause of the entry of Jesus into this world: it is also in itself a saving event, a cooperation in the Redemption. It is a motherhood in all the physical and spiritual fullness of that concept which, in itself, is already eminently redemptive. Church tradition grasped this very clearly, and expressed it in a beautiful way by calling Mary "the new Eve", thereby seeing her as indissolubly and actively linked to the person and mission of Christ, the new Adam. The theological meaning of this parallel is clear: just as Eve cooperated with Adam in our downfall, Mary cooperates with Christ in the work of redemption. 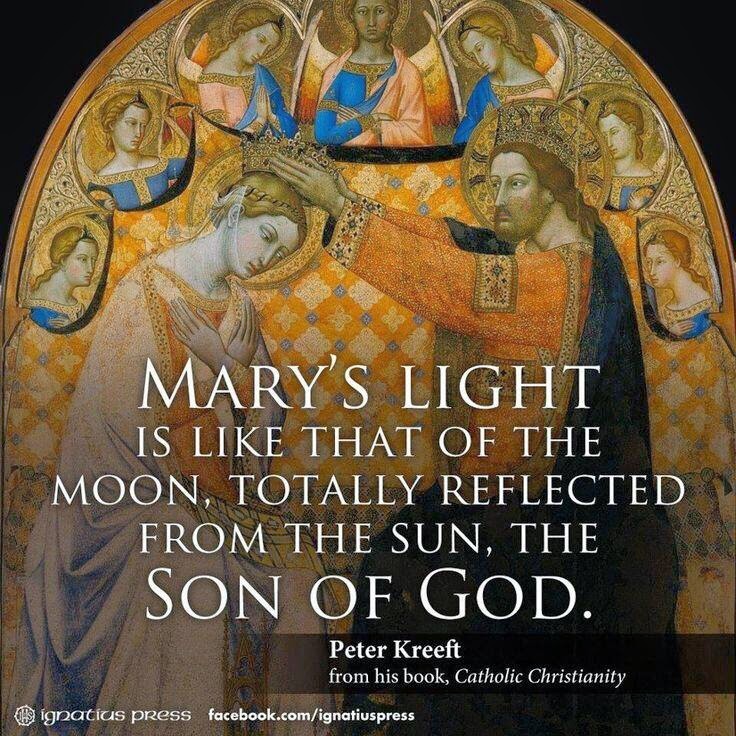 Mary's complete Christo-centricity (her vocation and her person have no reason of being other than divine motherhood) allows this motherhood to be described as an "ecclesiological" motherhood. That is, as a relationship of maternity towards the entire mystical body of Christ, because Mary's divine motherhood extends to motherhood of the whole human race (cf. LG 61).

Mary's motherhood is the work of the Holy Spirit, who


"just as He overshadowed the Virgin Mary when he began in her the divine motherhood, in a similar way constantly sustains her solicitude for the brothers and sisters of her Son."—John Paul II Enc. Redemptoris Mater, 25th March 1987, no. 38.

This motherhood is closely connected with Mary's fullness of grace, for it is by means of grace that she


"understood her own motherhood as a total gift of self, a gift of her person to the service if the saving plans of the Most High". Ibid, n. 39.

This service is a true maternal meditation on behalf of men, which "in no way obscures or diminishes the unique meditation of Christ, but rather shows its power: it is meditation in Christ." It is a matter of a meditation that is "intimately linked with the motherhood" of Mary. This meditation possesses a specifically maternal character—and is therefore distinct from the meditation that other creatures might have—and shows that Christ's triumph involves uniting others with Him in such a way that He causes them to cooperate in the Redemption. (cf. JP II, op. Cit., no. 38.)

As we look with hope to the work of the New Evangelisation, re-dedication to the care of Our Lady of Walsingham seems more pertinent than ever. With the appointment of a Marian Bishop in Brentwood, which has so many connections to the Shrine at Walsingham, are we seeing Our Mother remembering her dowry? Are we seeing the beginning of a re-awakening of the Christian faith in England? I hope so and I pray so!

Please remember Bishop-elect Williams in your prayers as he prepares to undertake this great mission in Brentwood.