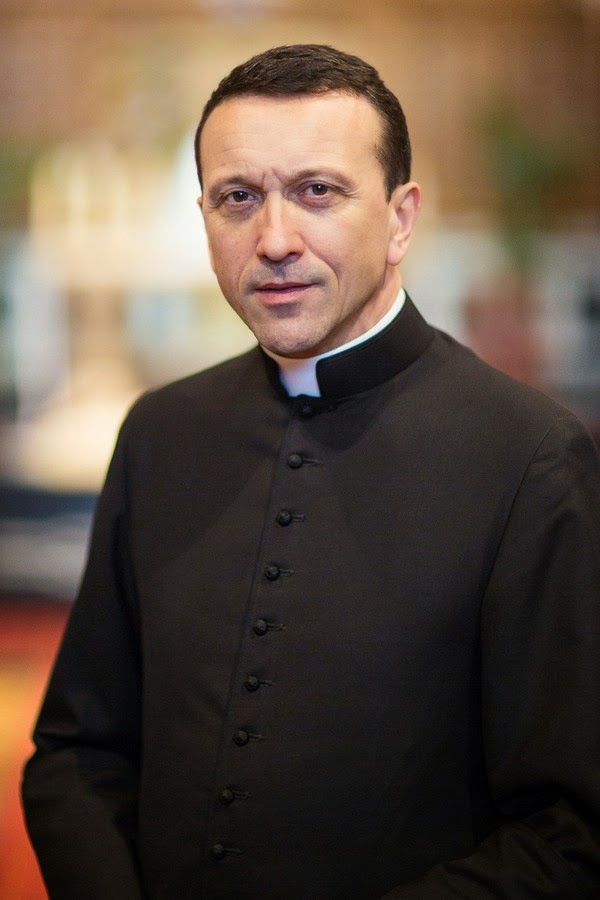 I have to say that I found Fr. Kevin's homily particularly moving today, so much so that I wanted to be a priest by the end of it! He invoked the Curé of Ars in his exposition of the priesthood for Vocations Sunday and the words stopped me in my tracks. Lots of fellow parishioners and parishioners from surrounding parishes often comment to me on Fr. Kevin's homilies; that they are instructive, that they recognise the faith being preached (the kerygma), that they inspire, and that they make you think. Today's homily certainly made me think. By kind permission, he has allowed me to share it with you all here to read, reflect and pray on. I hope you find it inspiring and that it inspires you to pray for our priests and bishops:


On Tuesday one of my oldest friends is going to be consecrated a Bishop; he will become the new Auxiliary in Birmingham. I am sure it will be a moment full of rather mixed emotions: we’ve know each other since we were students and seeing someone who is close to you being given the dignity of an Apostle is something that doesn’t happen everyday.  He explained to me how he was called see the Papal Nuncio in London who read him a letter from the Holy Father appointing him; and he said in a few minutes my life had changed dramatically.

You might think being made a Bishop is something someone might aspire to or desire; it obviously isn’t something you apply for! To fulfil the role of an Apostle, is to accept modelling yourself on Christ the Good Shepherd, to have the unconditional care and concern for the flock that is entrusted to you. A priest in a Parish also has this responsibility, on a smaller scale.

Each year on this Sundays the Church reminds us of the need to pray in a special way for those who the responsibility of shepherding the Church, and to pray for vocations to the priesthood and religious life, so that there may always be enough, even abundant vocations, to be the presence of Jesus in the world, to be signs of contradiction in a world where God is forgotten and often not seen. In this context the visible sign of the priest and religious is a vital reminder of the God who cares for us and is looking out constantly for us, whether we are near or far from Him.

One of the great champions of the priestly life and vocation is the Curé of Ars  St John Vianney; he is one of the best examples of what a shepherd in the Church should be. He often spoke of the priesthood as if incapable of fathoming the grandeur of the gift and task entrusted to a human creature:

O, how great is the priest! … If he realised what he is, he would die… God obeys him: he utters a few words and the Lord descends from heaven at his voice, to be contained within a small host.

Explaining to his parishioners the importance of the sacraments, he would say:

Without the Sacrament of Holy Orders, we would not have the Lord. Who put him there in that tabernacle? The priest. Who welcomed your soul at the beginning of your life? The priest. Who feeds your soul and gives it strength for its journey? The priest. Who will prepare it to appear before God, bathing it one last time in the blood of Jesus Christ? The priest, always the priest. And if this soul should happen to die [as a result of sin], who will raise it up, who will restore it’s calm and peace? Again, the priest… After God, the priest is everything! … Only in heaven will he fully realise what he is.

These words may sound exaggerated to modern ears, especially if we think of the experience we have of the humanity of priest (!) but they reveal the high esteem in which he held the sacrament of the priesthood. He seemed overwhelmed by a boundless sense of responsibility: Were we to fully realise what a priest is on earth, we would die: not of fright, but of love…Without the priest, the passion and death of our Lord would be of no avail. It is the priest who continues the work of redemption on earth…What use would be a house filled with gold, were there no one to open its door? The priest holds the key to the treasures of heaven: it is he who opens the door: he is the steward of the good Lord; the administrator of his goods… Leave a parish for twenty years without a priest, and they will end by worshiping the beasts there …The priest is not a priest for himself, he is a priest for you.

The essence of the Christian life is the living-out faithfully of what God has given us to do on earth. Those in Holy Orders do this by trying faithfully to fulfil the ministry that has been entrusted to them by God’s Church.  The lay-faithful - the vast majority of Christians - you do this by also trying faithfully to carry out what you have been called to do: which is transforming the world from the midst of family and married-life, by being right-in-there, in the midst of the world, doing the jobs we have, with all the Christian and human perfection possible. Because this is the way God makes Saints out of all of us.
We can therefore pray for each other on this Good Shepherd Sunday that, through Mary’s prayers and intercession, we can carry-out the works of God and the Church, with the faithfulness and enthusiasm which the Easter season calls us to.