May 28, 2014
It has been widely discussed in many and varied circles, that there have been troubles over the last year or so at Birmingham's Maryvale Institute.

Maryvale is an institute of higher learning in the arch diocese of Birmingham, renowned for its depth and orthodoxy. When I studied there, Rev. Dr. Richard Conrad told me that the B.A. at Maryvale had more breadth and more depth than the theology degree available at Oxford, and was a fraction of the cost. My own experience certainly bore this out; we studied a huge range of subjects with an emphasis on educating us and not simply achieving an academic degree. As the leading centre of Catholic formation in the country, Maryvale attracts the brightest and best lecturers, many of whom teach in Rome and are religious, thus deeply committed to the founding ideology of the institute for a well educated laity.

Maryvale has pioneered a "distance-learning" technique, which facilitates learning at pre-graduate and post-graduate level for many who would otherwise not be able to afford or maintain a course of study. It offers excellent degrees is a variety of theological, philosophical, and catechetical pathways from Certificates in Catechises, to Doctorates in Theology.

On 25 March 2011, the Feast of the Annunciation, The Vatican formally approved Maryvale Institute and it was formally erected by the Holy See as the first Higher Institute of Religious Sciences in the English-speaking world.

The Maryvale Institute was established by Archbishop George Patrick Dwyer in 1980. The Archbishop of Birmingham was responding to the need for religious formation, in particular for lay people and Religious, to assist in preparing them for diverse lay ministries and fulfilling Cardinal Newman’s vision for a laity well educated in the Faith.

The work started by Archbishop Dwyer has been continued by his successors Archbishop Maurice Couve de Murville, Archbishop Vincent Nichols and now Archbishop Bernard Longley, in their role as President of the Maryvale Institute.

Since the Second Vatican Council, with increased interest in the study of theology, the Holy See has defined and promoted the establishment of Higher Institutes for Religious Sciences.

Although there was some negative publicity last year when several members of staff left, reports are that the atmosphere at Maryvale is extremely positive. I recently spoke to my dear friend and tutor when I studied at Maryvale, Rev. Dr. Robert Letellier, who reported that, having just completed a series of lectures at Maryvale, things were very firmly on the up. He noted that not one priest or religious had parted company with Maryvale, apart from Deacon Nick Donnelly, the author of Protect the Pope Blog recently asked to consider a hiatus from blogging by his bishop.

I have spoken to Fr. Eddie, Maryvale's Director myself and must say he is very up-beat and positive about the future and mission of the institute. He is motivated, and has a clear motivation and agenda to succeed. It is desperately unfortunate that he walked into an extremely difficult situation which he had no part in making at the beginning, with a remit to sort things out. Bearing that in mind, please do keep him in your prayers.

There have also been a number of excellent appointments made:

The post of Course Director of Post Graduate Research has been filled by Dr. Andrew Morris PhD whose connections with the Maryvale Higher Institute of Religious Sciences go back to 1980.

Dr. Andrew has spent forty years working in Catholic education in a variety of teaching, leadership, administrative and governance roles. He is a former secondary school head teacher and Deputy Director of Schools in the Archdiocese of Birmingham. He has been a chairman of governors in two Catholic schools, a primary school in Walsall and a secondary school in Oxford.

His academic specialism is in the field of faith-based education and school leadership. He has over 30 articles published in academic journals (with more forthcoming), is an established author, book and peer article reviewer, provides educational training and other support for Catholic and Anglican dioceses, is an international conference speaker and advisor to Institutes of Higher Education, Local Authorities, other providers of Schools, the Catholic Education Service and various Catholic and Anglican Dioceses.

He is the author of ‘Fifty Years On: The Case for Catholic Schools’, and ‘Re-Imagining Christian Education for the 21st Century’ both published by Matthew James (in 2008 and 2013 respectively) and also ‘Catholic Education: Universal Principles, Locally Applied’ published by Cambridge Scholars Press in 2012. A collection of his articles and essays, ‘Catholic Schools in a Plural Society: Data and Analysis’ is to be published this year.

The Course Director in Philosophy in the Catholic Tradition position is now held by Canon David Evans S.T.B., Ph.L., a priest of the Archdiocese of Birmingham, a member of the Metropolitan Chapter and of the Metropolitan Tribunal. After studies at the Pontifical Gregorian University, where he was awarded a PhL summa cum laude, he served as a curate at St Mary’s the Mount, Walsall, when he was also chaplain to St Thomas More RC Comprehensive School. He became curate at St Aloysius, Oxford, two years later, before becoming lecturer in philosophy at Oscott College, the diocesan seminary. In the eighteen years he was there, he assisted at the weekends at St John Fisher, West Heath, Birmingham. He was dean of studies and vice rector. He co-ordinated the Oscott-Queen’s Joint Course on the Eucharist. He became secretary to the Bishops’ Conference Committee for Faith and Culture.

In 2001, Canon Evans was appointed parish priest of St Austin’s, Stafford. While there he became a member of English ARC From 2001-2006, he was episcopal vicar for Oxfordshire, Warwickshire and Coventry. He undertook postgraduate research at Liverpool Hope University for a thesis entitled Wonder, Encounter and Wisdom. Laying the Foundations of Pastoral Philosophy. He served as parish priest of St Teresa’s, Charlbury and is a Member of Council at Newman University. He was appointed chair of the Diocesan Committee for the Year of Faith. His research interests are in metaphysics and epistemology, the history of philosophy, and the authors Ludwig Wittgenstein, Maurice Blondel and Edith Stein. He continues to be concerned with ecumenical dialogue, the dialogue with culture and with atheism, and with the philosophical aspects of preaching the gospel.

Dr. Birute Briliute M.A. S.T.L. Ph.D is our lecturer in Catechetics and Director of the Ecclesiastical Licence in Catechetics. Her teaching experience began in Lithuania in 1990, at the time when religious education for the first time since the fall of communism was formally introduced to schools. Whilst working as a director of the Inter-diocesan Catechetical Centre in Lithuania (1994-2002) she taught theology at UG and PG levels at the Training School for RE teachers and catechists. As a member of the Lithuanian University pastoral ministry team she developed programmes and curriculums for the teaching of RE courses at UG and PG levels at 3 Lithuanian universities.

In September 2007 Birute joined the faculty staff of Heythrop College as an assistant to the Heads of department and in 2010 as a visiting lecturer in pastoral theology (Foundation Degree in Pastoral Mission).

The B Div programme is led by the wonderful Rev. Dr. Michael Cullinan who is a priest of the Diocese of Westminster. Ordained in 1995, he served in the parishes of Holy Trinity, Brook Green and St James’s Spanish Place and then went to Rome for further studies in 2000, living at the Pontifical Portuguese College. Fr Michael comes from Torquay in Devon, where he grew up and went to school. His first career was as a mathematician, reading maths at Balliol College, Oxford from 1975 to 1978, and then going to Peterhouse, Cambridge, where he did a Ph.D. in numerical analysis. After academic jobs in Salford and Dublin, he entered Allen Hall Seminary in 1988 gaining an external Leuven STB summa cum laude in 1995.

Fr. Michael was appointed in 2009, the year I lost Ruth. He is the person who is really responsible for me getting my degree from Maryvale. He is so much more than just a course director, he also provides spiritual direction, the sacrament of reconciliation, a vast wealth of intellectual knowledge and wisdom, all wrapped up in the ministry of a priest.

I have been asked to act as student support this year and I was proud to give my assent. Maryvale is a support resource and should be widely promoted by all diocese as the place to learn about the faith and deepen our understanding of our Catholic faith. Studying at Maryvale was one of the most formative and rewarding experiences of my life. It provided an incredible depth to my faith, gave me confidence and courage to speak about Church teaching, and I would highly recommend it to anyone.

All the contact details for the institute are listed here.

Full details of the academic staff are available here. 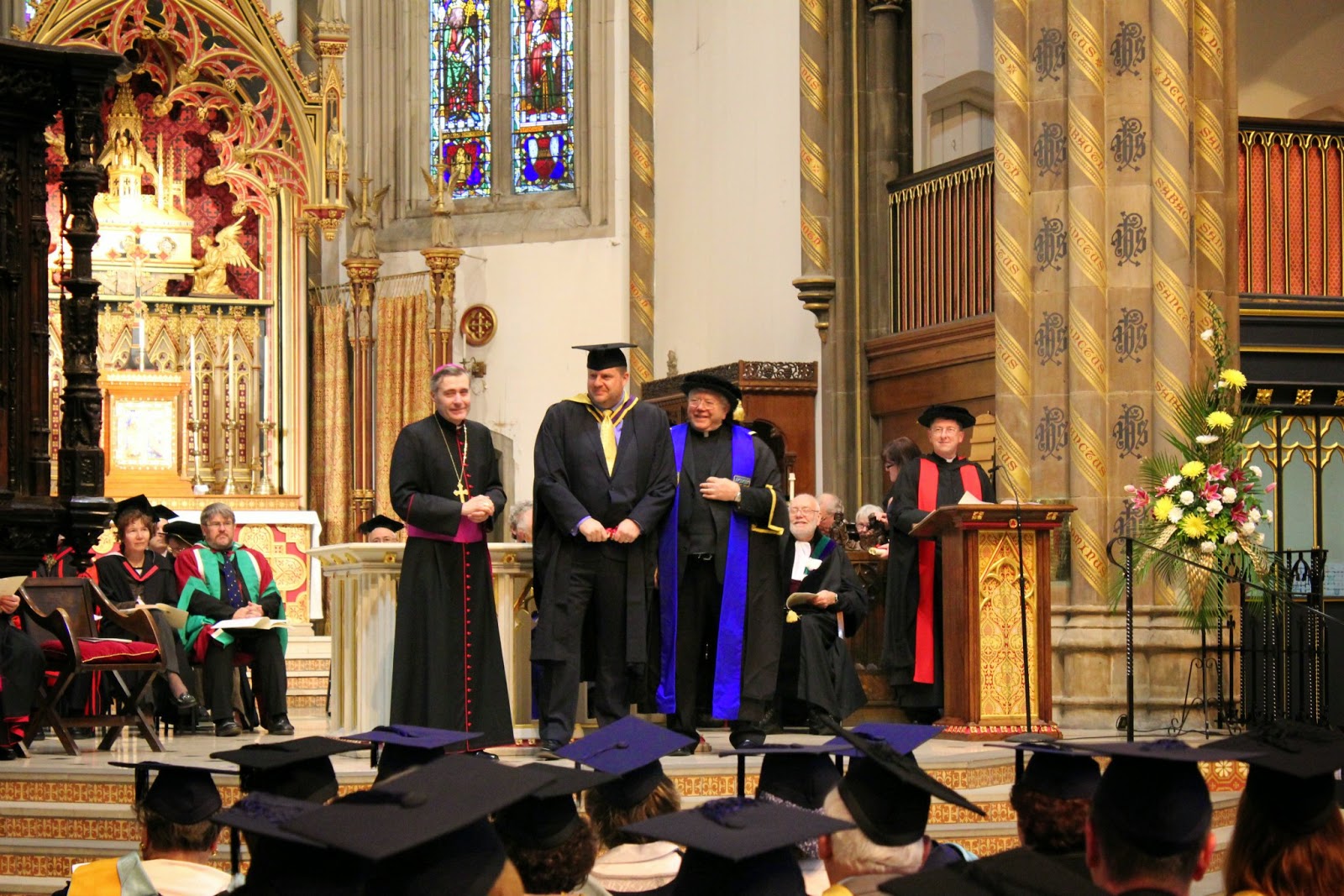