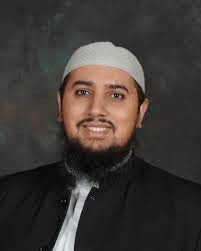 Mo Ansar is someone I have crossed swords with before. I like to think I'm an easy going sort of chap, willing to have a discussion on most subjects, particularly if your opinion is an informed one. As you might guess, I am interested in debating religion, especially with those who claim to hold exclusive rights to truth as Islam does. Islam has long been a fascination of mine and I have read quite a bit on it and spoken to lots of different people. However, my experience of Mo Ansar is that he is reactionary and obtuse, eager to shut-down any argument that isn't going his way.

This expose is particularly pertinent at the moment I think as we sit and wait to learn the fate of the 200 Nigerian girls kidnapped by Boko Haram, and the news that due to Sharia Law in Sudan, 8 month pregnant Meriam Yehya Ibrahim who faces a death sentence for apostasy can have her baby before she is killed. Can you hear the vocal condemnation of the Muslim community? Do these examples not show us that all religions are not equal?

My own position is that the truth of any social system must be based on the foundational philosophical principles which guide it. Philosophy is directly concerned with asking the question of life's meaning and sketching an answer to it, as such, philosophy is an essential component which must be carefully analysed when considering the truth of any ideology.

Ansar is a self-appointed apologist for Islamic philosophy and indeed claims to be an ‘educationalist’, ‘theologian’, ‘lawyer’ and ‘visiting lecturer’. In fact, he has no qualifications and has never worked at a school, university or law firm. Jihad Watch explains that according to court documents, Ansar’s failure to honour a debt to Lloyds TSB—a staff loan—appears to be what kicked off a 36-day employment tribunal and launched him into a career of dishonesty and special pleading in the early 2000's.

He did not repay the money he owed, and when his manager launched a compliance investigation he accused that manager of “racial discrimination,” “victimisation” and “harassment.” He later accused the bank of “tampering” with data files, a claim rejected outright by the judge. Many appeals later, after numerous failed allegations of bias against the chair of the Tribunal from Ansar, the case was thrown out by the Supreme Court before three Lord Justices, including Leveson, at massive cost to the taxpayer. In an earlier appeals judgment, the judge noted that Ansar found it difficult to take instruction from female superiors, had undertaken “sloppy” work for the bank and had lied in a letter pertinent to the case. There was also evidence of “deliberate falsification of assets” by Ansar, said the judge, who noted that Ansar was “a forceful personality” who “manipulated circumstances for his own benefit.”


He certainly comes across as very arrogant and superior, probably born of a false self-importance due to his media presence. He also comes across as deliberately ignorant and disinterested in honest dialogue. Which is a shame.


This week, Nick Cohen has written an expose on Ansar in The Spectator, which makes really interesting reading. One of my concerns when conversing with Ansar has been that he tries to portray himself as a moderate, however he very quickly reveals that he holds some pretty extreme views in any discussion.

The Spectator article describes Ansar's attitude towards the Islamic far right, which hates and targets critics of fundamentalism, including critics who are liberal Muslims and ex-Muslims, as "equivocal to put it politely". Indeed, in a similar piece to Cohen's, Milo Yiannopolous calls Mo Ansar: The Bogus Muslim Theologian Who Defends Slavery & Says Muslims Discovered America in 1100AD While Claiming Benefits & Appearing on the BBC.

Iain Dale has also written on this and has:


...been looking into Ansar for the past three weeks, and my investigation has revealed that Ansar has fabricated an extraordinary number of jobs, lied about professional qualifications and invented work experience, causing distress and harm to many, misleading the public. British Muslims find it laughable that Ansar claims to represent them. I could not find a single journalist, community organiser, imam, activist or foundation head who said they supported Ansar’s views or that he spoke for any sizeable number of Muslims or any local or national community. Most expressed confusion that Ansar was given such a prominent platform by the BBC, particularly in light of his widely-loathed behaviour on social networks.

The Spectator article also notes Ansar's promotion by the BBC:


Broadcasters made him the voice of British Islam, even though no electorate had voted for him, and no organisation had appointed him its spokesperson. Ansar was not an Islamic scholar. He had not published a book or led a movement. He was a planning manager at Lloyds-TSB in Winchester until 2006, and has had no visible means of support except appearance fees and state benefits for years.

Another interesting element to Ansar's success is his use of Social Media. Cohen again states:


he was among the first to understand that Twitter could turn you into a minor celebrity. Ansar has issued tens of thousands of Tweets: picking fights, issuing proclamations, and seeking endorsements. Alongside the official Mo Ansar account, there is a Twitter alias – a ‘sockpuppet’ account in the jargon – called @The_TruthTeller, which denigrates Ansar’s enemies. It was originally called @MoAnsar2, and is written either by Ansar, who was unavailable for comment, or by a besotted fan determined to fight his every battle.

One has to hope that this is the end of Ansar now and we will see him on our airwaves no more. Jihad watch has captured some of Ansar's claims on Twitter. That he is a Lawyer for example: 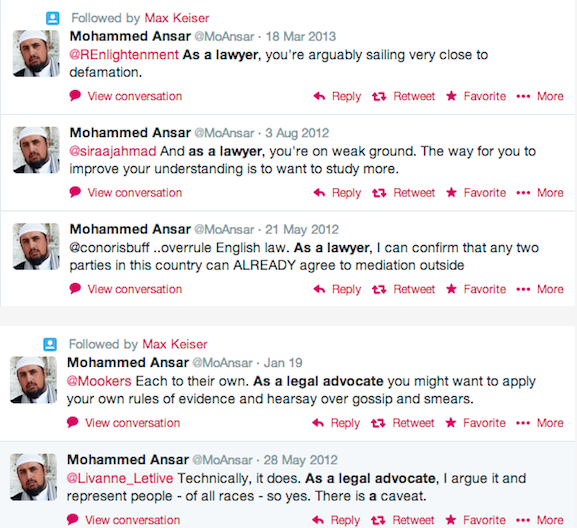 A claim he now completely denies:

I shouldn't be surprised by this though, after all lying to non-believers is permitted in the Qur'an under certain circumstances, taqiyya and kitman. These circumstances are typically those that advance the cause Islam—in some cases by gaining the trust of non-believers in order to draw out their vulnerability and defeat them. See here.

Surely no self respecting BBC Producer can book him and retain any credibility now?

I think Paxo was on to him though. I think this debate poses questions about Medhi Hassan too if I'm honest!

More heat than light anyone? Maajid's position accepts that one cannot maintain Qur'anic literalism, which is amoral and thus conflicts with Mo's:

Probably the most hilarious and comprehensive outing of all of Ansar's contradictions and incredible claims are summed up by The Rationalizer here.
Islam Maajid Nawaz Mo Ansar Sharia