Pope in a Hornet's Nest 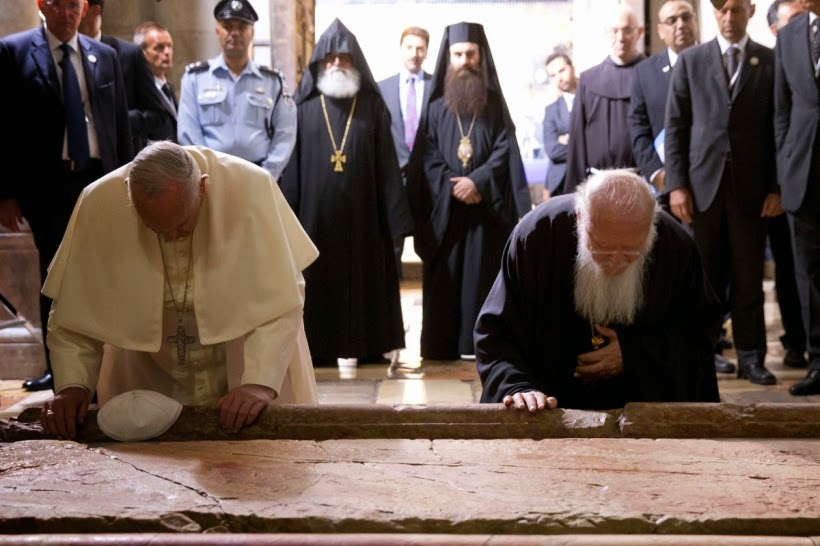 I often wonder how Pope Francis is perceived outside of the frenzied and constant analysis of those of us inside the Church. Obviously we have the secular press to help us gauge the temperature, but as we have seen, that tends to distort the picture to a quite extraordinary extent, emphasising things he hasn't said in order to feed the meme that the Church is going to change it's teaching on one dogma or another.

The Holy Land, as it has been throughout history, remains a melting-pot of different faiths and cultures. Judaism, Christianity, Islam, Drews, Bahá'í, and Zoroastrianism all try and live there in some degree of peace, some more successfully than others as we know.

Fr. Raymond Blake﻿ posted yesterday on the Pope's visit to the Holy Land, which led me to this article in the Jerusalem Post. Fr. Ray is disappointed that the long heralded meeting between the Pope and the Patriarch Bartholomew failed to yield any exciting ecumenical breakthroughs between East and West. I loved the image of the two of them at Christ's burial slab (see image above). I was also moved by Pope Francis evocative words:


"We need to believe that, just as the stone before the tomb was cast aside, so, too, every obstacle to our full communion will also be removed,"

From the beginning of this papacy, there have been great hopes that Pope Francis can bring about reunification with the East, or at least a warming of relationships, as he was he was concurrently named ordinary for Eastern Catholics in Argentina, who lacked their own prelate, and is therefore able to celebrate the Divine Liturgy of Saint John Chrysostom.

As Father Ray remarks, the Jerusalem Post actually regarded the Pope's spontaneity as rude and the visit as generally unfriendly, to the point where it has undone much of the hard work building friendships between Jews and Catholics since the Council, quote:


"Alas, the Golden Age of Catholic-Jewish relations seems to have come to an end during Francis’s visit to the Promised Land this week."

I'm not sure how widely this is felt in Israel, but another news source Ynet, carries similar sentiment, albeit more focused on a series of perceived slights which seem quite a stretch to me, a simpler explanation would be that the Pope was unaware of the potential looking at some art prepared for him to view might cause in such a deeply nuanced cultural melee. Certainly when I visited the Holy Land it seemed clear that our Muslim tour operator took every opportunity to gain political kudos and make a point, and did not like to be challenged on it.

It is my impression that many people here in the UK tend to have greater sympathy with the Palestinian side of this conflict and thus I assume many will see this as a good thing, a redressing of the balance towards the perceived injustice suffered by the Palestinians. I just think it is interesting to see the juxtaposition in style of Francis & Benedict articulated by someone outside the Catholic bubble.

One very interesting observation has been that the Pope traveled in bullet proof car in Israel while in Bethlehem he traveled in an open car. The intimation is that this shows he acknowledges danger comes not from the Palestinians, but from Israelis themselves. Was Pope Francis doing something no other World Leader ever dared to do? Is this because other leaders are afraid of the Jewish lobby and funding of their campaigns and presidency elections, while Francis is unconcerned with such things? Or is it simply the case that the Palestinian Arabs could not afford that kind of security for the Pope? If so the former assertion is merely an attempt to rationalise a shortcoming as an article of faith by the Pope, where in fact, he was, as I said earlier, just going along with what was there? Such machinations are frankly typical of the complexity of relationships in the Holy Land. 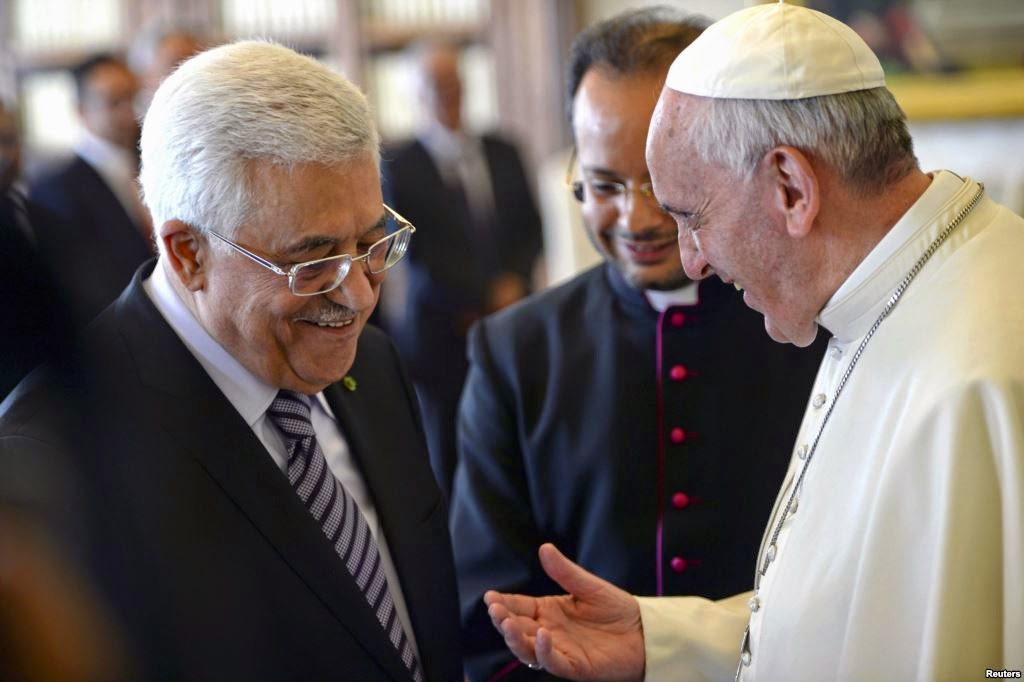 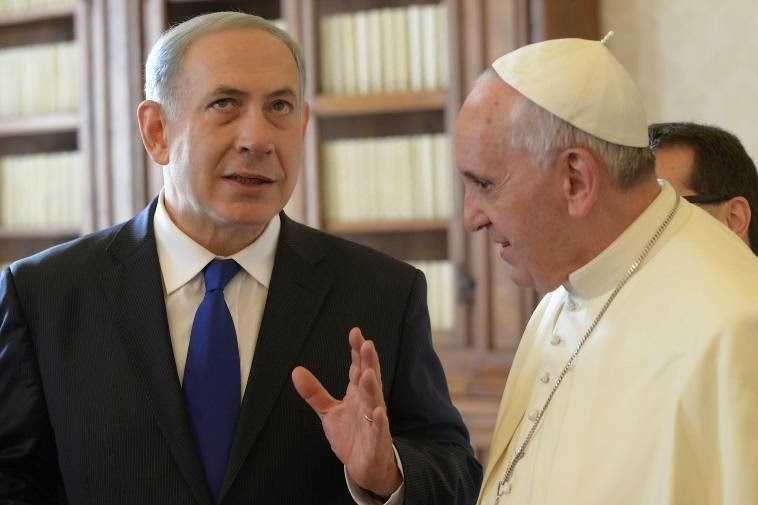 I think it is probably fair to say that the reality is that Mahmoud Abbas treated the pope with graciousness and genuinely welcomed him. Is it fair to say that Netanyahu's greeting was somewhat less genuine? Certainly we can be sure that the Pope sees through his "Jews good, Arabs bad" mantra at the detour to the victims of terror memorial. I can't see that this would left a very good impression on the Holy Father, but did he concede to the detour because he realised he had made a mistake by favouring the Palestinians? The Telegraph reported that a high-ranking Israeli official has said:

"This was in the spirit of don't get mad, get even, if the Palestinians are using the pope entering Bethlehem to convey purely political messages, we will get even. Yes there's a wall, but why is there a wall?"

The stop at the wall appears to have been a blatent attempt by the Palestinians to manipulate the Pope:

"There is a general feeling that this was a well-prepared propaganda event into which the entourage of the pope brought him without thinking about the meaning or about how it would be interpreted,"

The Telegraph reports one well-placed source as having said.


"We definitely blame the Palestinians, although we cannot say exactly how it took place. If one thing is certain it's that he didn't happen to go there by chance. He was brought there by his hosts. There is not a shadow of doubt that he was brought there deliberately."

Israeli complaints about the event were conveyed through "professional diplomatic channels" rather than directly to the Pope, the official said. "We told them that they had been cornered into a part of the field where they didn't want to be," he added. Whoops! I would love to know how the Pope feels about all this. Certainly, Pope Francis demonstrated his courageous commitment to peace on his visit. Sure, it would be a miracle if he did change anything over there, but he certainly had a go, saying:

"All of us - especially those placed at the service of their respective peoples - have the duty to become instruments and artisans of peace, especially by our prayers. Building peace is difficult, but living without peace is a constant torment."

After all, what can you do when you fall into a hornet's nest? 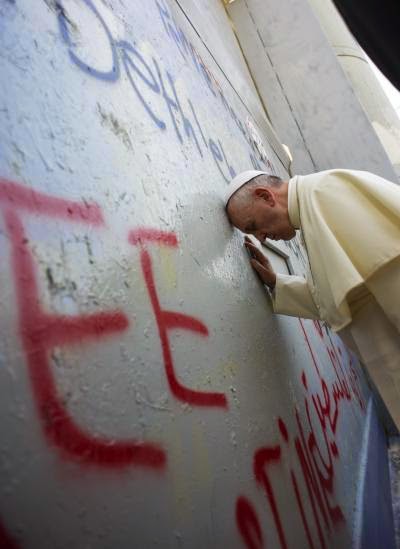