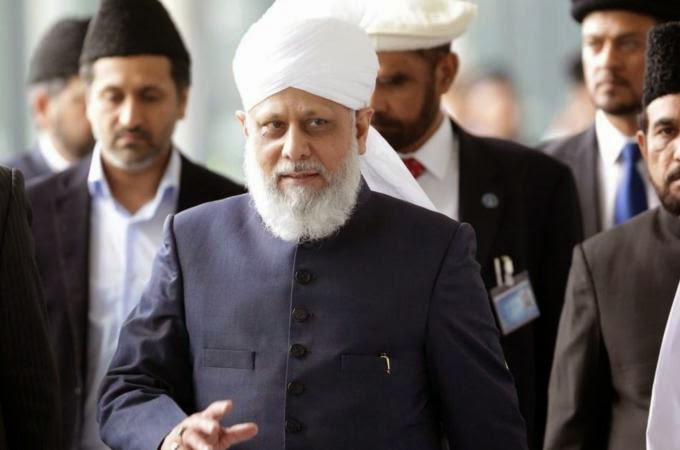 I'm rather cross that Ahmadiyya is being portrayed here as British Islam. It is not. I would argue it is probably what British Islam should be, but the reality is that the opinion among ALL Muslims as to the fact that Ahmadis/ Qadanis are NOT Muslim is unanimous. As such they are NOT allowed entry into any of Islam's holy places, nor participate in prayers or rituals.

This is because one of the basic dogmas of Islam (agreed upon by ALL Muslims regardless of denomination) is that the prophet Muhammad (saws) was the LAST and FINAL prophet: the seal of the Prophets.

In reality, the sad truth is that Ahmadis are being tortured and martyred on a weekly basis in Muslim countries. It's a disingenuous joke that Islamic Britain should try & own this laudable Ahmadi gathering, the Ahmadiyya are more persecuted by Islam than Christians are!

I wish Muslim Britain was following the Ahmadi line, I wish they were gathering to promote tolerance, but the Sunni majority are silent as far as I can see, apart from the brilliant Maajid Nawaz on BBC Question Time last night: 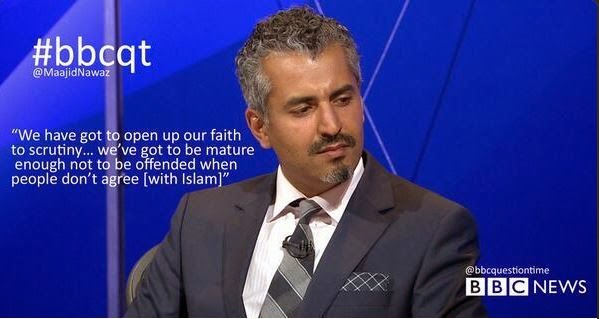 I have spent a lot of time studying & reading about Islam and retain a great deal of interest for the religion (which shares many basic tenets with Christianity & Judaism) as well as respect and admiration for the culture. Initially I was drawn to another scripture based faith. I wanted to see what *their* book says. When I discovered it was basically the Bible stories with a few interpolations about Mohammed's enemies, what women should wear, and date trees speaking to Mary, I was disappointed, and interested as to why anyone would be so convinced of its miraculous nature and passionate about emphasising the fracture between Islamic praxis & Christian doxy rather than celebrating the fact that the fundamental message of human dignity was the same in both faiths.

Anyway, when I look at what Islam continues to mean for the world, I think it is important to look at the basics of the belief and then state unambiguously where it is unworkable and why. I do not seek to stifle or silence Islam, I think everyone should be free to practice their religion. But I think debate and discussion is the way in which we learn and grow as a culture. Islam is a cultural interpretation of the best way to live, and as such needs to be critiqued, just like Christianity is, just like any ideology is. Islam tries to enforce a cultural praxis on foreign societies, and I think this is fundamentally where it falls down. It wants to make the world Mecca. It wants to make the world Saudi Arabia.

Mohammed wrought no miracles, apart from the Qur'an according to Islam (there's also a miracle of the moon, but not all accept this), yet he accepts Jesus did. Jesus performed miracles to demonstrate His divine origin; to show the people the finger of God amongst them. He did not claim to be a prophet, but God Himself. Islam & Christianity are not the same therefore, a parallel between Jesus & Mohammed is not possible. Islamic da'wah always falls down on this and blusters about Christ's humanity, without comprehending the teleology of the Judeo-Christian tradition. 13,000 years building up to the Incarnation give it a depth and context unrivaled in Islamic thought. You find in discussion a Muslim will attempt to humanise Christ, which I always find contemptible to some extent. As Islam hold Jesus as a prophet in His own right, they needs must exalt Him, not denigrate Him, and this is one of the fundamental logical flaws at the heart of a system which, when seen in context, is really nothing more than a Christian heresy.

In this discussion, let me assure you, there is nothing as powerful as the witness of a person freed from the martial theology of Islam to pursue a love affair with the living God.