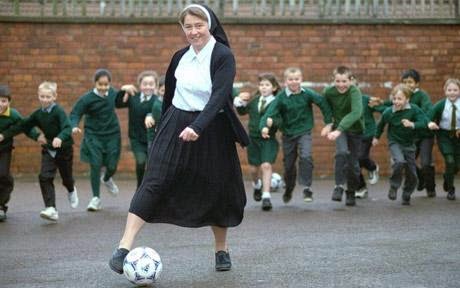 I am listening to the debate which continues to rumble on about religion in schools subsequent to the Trojan Horse affair, this morning on Radio 4.

The effect of the discovery of an extremist agenda within certain schools with a Muslim majority has led to a renewal of calls to remove all religion from schools and instead pursue a secular liberal agenda. The justification is that despite the reality of an established Church in the UK, organised religion is virtually a thing of the past, and more and more people are secular and liberal. Religion is no longer relevant for them.

From a Catholic perspective of course, this is strange, given the broad success of Catholic Schools, and their tendency to be over-subscribed. If we don't want religious schools, how do we deal with this inherent dichotomy?

From a secularist perspective, faith schools should be abolished and secularism enforced. The issue is a separation of private belief from the delivery of a public good. That is why secularism is appropriate. As I alluded to yesterday, this attitude, typical of the current vogue of illiberal liberalism, is wrong and indeed the received narrative of European politics is misleading insofar as it tells of a prevailing Christian, theological, Renaissance culture, which only became secularised and tolerant through the rise of science. In fact, science cannot, in and of itself, give an account of human dignity, because dignity is based on human freedom. The morality of freedom is Biblical. Its politics are the politics of freedom, and its theology is the theology of freedom.

We have seen the secularist's agenda before, in the revolutionary politics of France which saw rights as an ideal description of humanity which it was the job of politics to enforce. Society in this model is about the transformation of society by the force of law. Think about this: when the regime is by definition regarded as realising rights and freedoms, the citizen becomes deprived of any right to complain that he is being deprived of his rights and liberties. As Rousseau said, 'if need be, we must force people to be free'.

We have to wake up and see that this is a step towards totalitarian democracy. When politics becomes the pursuit of abstract perfection by means of legislation, freedom is in danger—we have been here numerous times before.

You have to wonder if Neitzsche understood this when he said about man:

—now he seems to be rolling faster and faster away from the centre—where to? into nothingness? into piercing sensation of his nothingness? (Neiitzsche, On the Genealogy of Morality, Third Essay, 25:113).

Academically, I have to say that I cannot accept any logic that attempts to force me into accepting the hermeneutics of suspicion of the Marxists, Freudians, and neo-Darwinians: that we do not really mean what we say, that all human communication is either deception or self-deception. In plain language, this is mere cynicism and its effect is to undermine the trust on which human relationships and institutions depend.

The only historical counterforce strong enough to stop the slide from democracy into tyranny, as happened in Athens in antiquity and in France during the Reign of Terror, is the recognition of the limits of human authority under divine sovereignty. It is the insistence on the non-negotiable dignity of the human person and the importance of protected space—the families and communities that make up civil society—where relationships are not based on power, which saved England and America from the worst excesses of revolutionary politics that cost tens of thousands of lives in France and tens of millions in Russia.

The difference involves a religious understanding of a discovered morality as opposed to an invented one. The former pre-supposes that it exists independently of our will, the latter manufactures a relative morality dependent on temporal trends. We recognise true morality as a call from the very essence of our being: love your neighbour, love the stranger, feed the hungry, heal the sick, reach out to the poor, do not hate, do not harbour a grudge, do not take revenge, do not stand idly by in the face of injustice, be forgiving as you desire forgiveness. There is incredible power in these teachings which should serve to sacralise our relationships and fulfil us in our daily dealings.

Utilitarianism (the idea that morality is simply decided by the greatest happiness for the greatest number), by contrast, may find the greatest happiness for the greatest number in something which is plainly wrong, like prejudice in a racist society, or violence in a lynch mob. Utility can conflict with integrity: sometimes we have to do the right thing even though it may be difficult or makes people unhappy. (To find out more on the Catholic position regarding both Utilitarianism & Consequentialism read blessed John Paul II's encyclical Veritatis Splendor especially numbers 74, 75 & 106).

There is, then, a connection between religion and morality. Our Catholic faith is perhaps the greatest moral tutor the world has ever known and understanding the principles of faith can provide us all, but our young people especially, with a sound method of discernment which will serve them all their lives.

Catholic education begins with an objective understanding of what we are—body-soul composite beings—in that we are human, we are human in body and soul. We are made by God and for God and our desire for God is written on each of our hearts (c.f. CCC 27) thus man only lives freely if insofar as he / she lives by this bond with God.

If we understand that we are all created in the image of God (c.f. Gen 1:27-28; 5:1-3; 9:6; Heb 1:3; Col 1:13-15; 2 Cor 4: 4-7) we recognise the essential dignity of all human life. When we turn our gaze towards others then, our faith teaches us habits of virtue by getting us to do ethically demanding things: visiting the sick, comforting the bereaved, helping the needy, donating our time and money to worthy causes (c.f. Matt 25:40). All these things are done in the context of community, and community is the focus and centre of theology, insofar as the Holy Trinity represents the perfect community: communion-in love-without rivalry.

The pursuit of Knowledge has long been a satisfying dimension of our humanity. Knowledge makes us happy because it shines a light on the essential questions of our being: Who am I? (The question of identity) Why am I here? (The question of purpose) How shall I live? (The question of ethics and meaning). All knowledge helps to develop a contextual relationship to these questions, but ultimately, they can only be answered by theology, not politics, not economics, not science and not technology. It is for this reason that Catholic teaching concentrates on the centrality of faith: learning how to worship God the Father in spirit and truth (c.f. John 4:23) especially in liturgical action. Physical, intellectual and moral talents need to be developed harmoniously, in order that each person can achieve fulfilment and reach their full potential. (c.f. Canon 793-795).

I think that if you want to extricate these elements from your child's education, that's up to you, but personally I feel they are essential for a proper understanding of what it is to be human, society, and community, and only serve to enrich and improve our society.