Pentecost 2014—A Journey to Belief 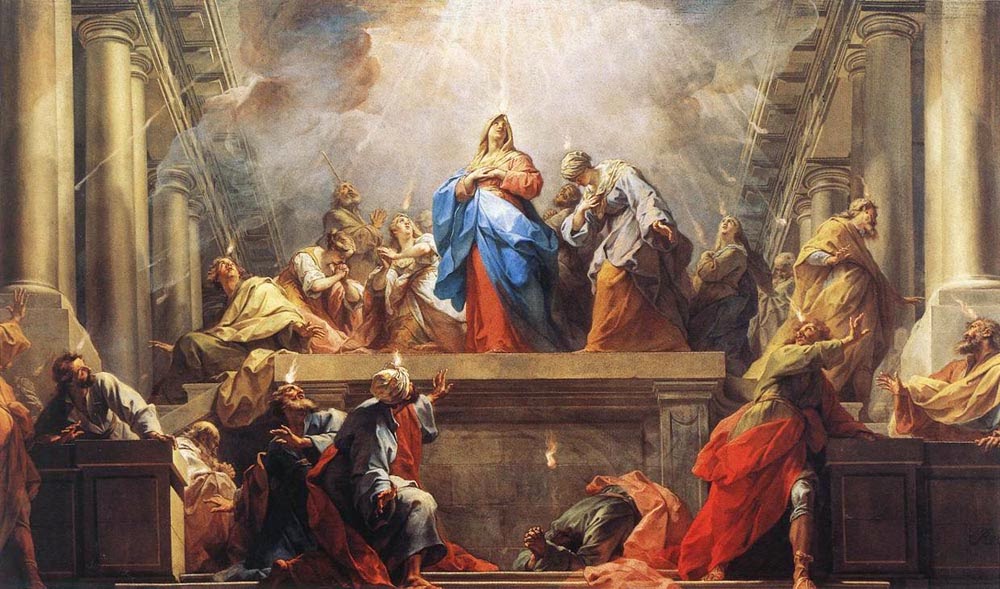 I thought I would have a serious look at the Gospel today. I've reproduced the text here so you have it in front of you. This is the RSV Catholic Edition translation:

Jn 20:19-23On the evening of that day, the first day of the week, the doors being shut where the disciples were, for fear of the Jews, Jesus came and stood among them and said to them, “Peace be with you.” When he had said this, he showed them his hands and his side. Then the disciples were glad when they saw the Lord. Jesus said to them again, “Peace be with you. As the Father has sent me, even so I send you.” And when he had said this, he breathed on them, and said to them, “Receive the Holy Spirit. If you forgive the sins of any, they are forgiven; if you retain the sins of any, they are retained.”

Today's Gospel constitutes an anticipation of Pentecost. Jesus is raised from the dead with the same body which was crucified and died a short time earlier (20: 25, 27). The marks of His earthly sacrifice are carried even when He ascends to heaven (Rev 5:6, CCC 645). This marks a continuity between the crucified and the risen Jesus. It is the same Jesus who is recognised when He appears. He is recognised, for example, in His speech (Jn 20:16), and in the breaking of bread (Lk 24:39), and showing then His wounded hands and pierced side, He insists that this is the same body as was crucified (Jn 20:27)

When Jesus breathes on the disciples we see that the risen humanity of Jesus has become a sacrament of the divine Spirit (6:52-58; CCC 1116). John uses an expression that recurs in significant contexts in the Greek Old Testament in Gen 2:7, where the Lord breathes life into Adam; in 1 Kgs 17:21, where the Greek version specifies that Elijah resuscitated a boy with his breath; and in Ezek 37:9 where God raises an army of corpses to new life by the breath of the Spirit. However, John does not mean that Jesus transmits a special power, that of forgiving sins, nor the bestowal of strength to preach the Gospel; nor is it satisfactory to regard this episode as the Johannine equivalent of the pouring forth of the Spirit at Pentecost (Acts 2). Rather the risen Jesus bestows the Holy Spirit on His disciples in order to arouse in them the Easter faith (cf de la Potterie, I., The Hour of Jesus (New York, Alba House, 1990), p. 179)) which is not to be identified with the Pentecostal power to bear witness which the disciples will need in order to carry out their mission. This precursor is rather a necessary precondition for that, because it is necessary to become His witness; in order to be able to carry His message into the world, it is necessary to have been sanctified in truth (17:17-19). Interesting to consider the post-Easter events in this way—as a genesis and development of the Easter faith in the Apostles. Think about it in the context of Thomas' initial absence, comments, and then meeting with the Risen Lord. Jesus invites Thomas to believe "Become a man of faith" (verse 29); it is a practical certainly that the other disciples, eight days earlier, had to make the same journey to belief.