Armageddon Discovery Shows How Badly Dan Brown Got it Wrong 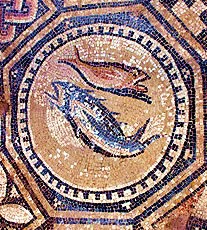 Well, obviously, he got it wrong lots in The DaVinci Code, but he did give us all something to talk about again!

This week, on the CNA website, Bishop Arthur Serratelli, the bishop of Paterson, New Jersey, uses a fascinating archaeological discovery to show how Pope Francis articulates a fundamental Christian truth when he says:

The news that the remnants of a 3rd century A.D. church have been unearthed at Megiddo, the venue for the New Testament's final battle at the end of the world (Rev 16:16) has demonstrated that Brown's assertion in the DaVinci Code, that the divinity of Jesus was only decided at the famous 4th century Council of Nicaea has absolutely no basis in historical fact.

"But that's just a fictional book" I hear you say. And you are correct, but regardless, Brown's fiction is compelling precisely because he mixes fiction and fact to the extent that the reader accepts the plausibility of the work entirely. To go further, Brown himself, when asked on NBC's Today Show, "How much of this is based on reality?" answered: "Absolutely all of it. Obviously Robert Langdon is fictional, but all of the art, architecture, secret rituals, secret societies – all of that is historical fact." Indeed, only this week in discussion with Muslims, the fact that Jesus was not divine until Nicaea was thrust at me. I had not heard this before Brown's work, and can only assume that the meme started there.


'My dear,' Teabing said, 'Jesus' establishment as "the Son of God" was officially proposed and voted on by the Council of Nicaea.'—The Davinci Code, p. 315.

This is a natural evolution, not some orchestrated decision passed at council by means of assassination or coercion of any sort (if one studies the process and development, one of the most incredible and fascinating facets of this historical reality are that it takes place universally), for the Trinitarian confession was latent in the Christological (cf. Acts 2:33) and clearly implied in the early kerygma (cf. Acts 2:14-39; 3:12-26; 4:8-12; 5:29-32; 10:34-43; 13:16-41). The Trinitarian profession of faith in the New Testament is best witnessed to by Matthew 28:19-20 and 2 Cor 13:13; it corresponds to the Trinitarian teaching of the Apostles (cf. Ephesians 1:3-14).

So, to sum up, the Trinitarian expression of faith was implied in the first preaching and is evident throughout the Old Testament.


This is demonstrated by the discovery in Megiddo. The name “Armageddon” simply means Har Megiddo or the hill of Megiddo. Today, ancient Megiddo is a peaceful archaeological site. Recently clearance work unearthed a Roman settlement containing all sorts of other buildings, but including this church building. Another interesting element of the discovery is that this building existed at a time when Christianity was persecuted by the authorities.

A most significant element is a 580-square-foot mosaic with the image of a fish, one of the earliest Christian symbols. The mosaic bears the Greek inscription that reads “The God-loving Akeptous has offered the table to God Jesus Christ as a memorial.” This mosaic is important for two reasons. 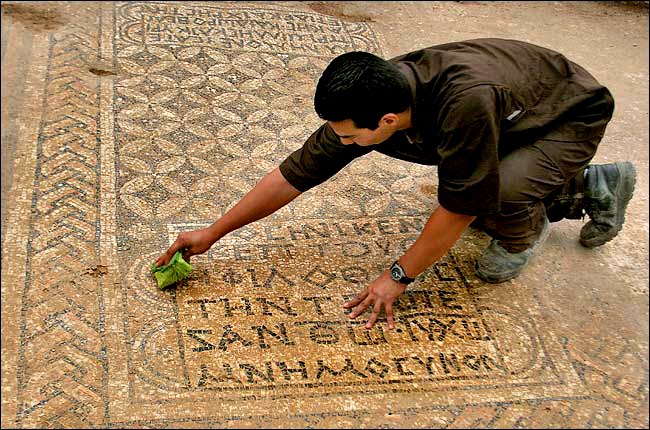 First, not only is its inscription the earliest anywhere mentioning Jesus Christ but, more amazingly it refers to Jesus as God. Contrary to Dan Brown's assertions in The Da Vinci Code, this inscription shows that Christians were already confessing Jesus as divine a century before that council. The divinity of Jesus is the very foundation of the Christian faith.

Second, the inscription mentions a table donated for the gathering of Christians in this church. When Constantine legalised Christianity in the 4th century A.D., public church buildings were constructed and the Eucharist was celebrated at an altar. The altar made clear that the Eucharist was a true sacrifice. But, before this, the first Christians gathered at table to celebrate what Jesus had done at the Last Supper. In fact, 1 Cor 11:23-34, which actually predates the writing of the Gospels, gives witness to this gathering of Christians at table to celebrate the Eucharist. Now, for the first time, we have objective archaeological evidence of this at Megiddo: proof that the Holy Mass is a ritual which has taken place every single day throughout history, since the final meal shared by Jesus with his disciples in the upper room in Jerusalem. This constitutes an unbroken chain of memory, not faith found in a book, but a collective recalling of actual events, which has been passed down to us through the generations.

Thus, both the literary evidence of the New Testament and modern archaeology confirm that Christians have come together for the Eucharist from the very beginning of the Church. This is profoundly significant. Being a Christian has always meant more than just one’s own personal belief and devotion. To be Christian means to be part of the Church gathered together for the Eucharist.

It this basic truth of faith Pope Francis is alluding to in the quote at the start of this blog. At a time when many deem religion to be a private matter and do not see Sunday Mass as important, the Holy Father has recalled us back to the basics. Being a Christian and gathering with other Christians for the Eucharist cannot be separated. We cannot be Christian in isolation.