Mgr Keith Newton to Anglicans: Come & Be One! 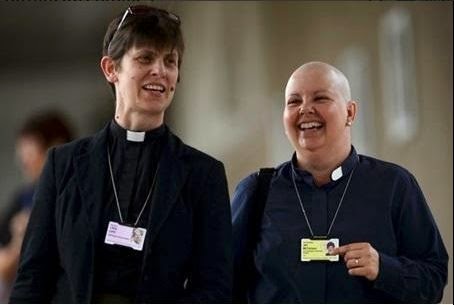 The decision of the Synod yesterday to "create" women "bishops" sounds the death knell for Anglo-Catholic aspirations of reunification with Rome. In a frankly, barking mad attempt to redefine and remake two thousand years of Christian Tradition, the Anglican Synod voted for the third time, to overturn centuries of practice and biblical teaching in a total capitulation of divinely revealed truths before modern temporal considerations. I frankly find it amazing how God's will can be discerned by repeatedly voting for what the world apparently wants. Evidently, the last two votes which were 'saturated in prayer', and produced a rejection of women bishops, didn't count as being God's will. Third time lucky. If at first you don't succeed, just keep plugging away. What better way to show the world that revelation doesn't exist, let alone matter. And this is the crux of the matter--the way that decisions are made within the Anglican Communion, as one Anglican described it on BBC News last night: by democracy. Christian faith is about truths which have been revealed by God and can not be abrogated by man's political machinations. In this sense, it is not open to the Church to decide about women's ordination: it simply does not have the authority to change an Apostolic Tradition which has been the reality for the whole history of Christianity. Let's face it, Had Christ, the revolutionary who was killed for His challenge to the establishment, wanted women upon the altar of His Church, would He not have ordained Mary, His mother and the Magdalene? Why is it that saintly women like Mother Teresa never insisted on ordination to the priesthood? Yet, because of her saintly ways, she carried the message of the Lord even more powerfully than the ordained priests, bishops and cardinals!
Moreover this is not an issue of equality, because men and women are of course equal in God's Church. But the Gospel teaches us to value differences between us and recognise our different gifts. We do not need to make everyone the same, because we have been created in our diversity. Thus the message of Trinity, and of Heaven is to accept each other with our differences; unity in diversity.

So why am I bothered? Well, I'm not in many ways. I think this was always going to happen, and I think it would be misogynistic to allow women priests and not women bishops. The break with tradition comes with the first instance of ordinational heresy, not the second, which must follow as night follows day. As Fr. Alexander Lucie-Smith states in the Catholic Herald today:


I welcome this latest step as it restores some sanity to the world. There was no earthly reason why that ‘stained glass ceiling’ was in place; except there was. If the Church of England believes in apostolic succession, then the ordination of future priests is compromised if the ordaining prelate is female. However, though this argument has been aired many a time, it was not allowed to carry the day. In fact, the real delay to the legislation has been over the safeguards to be put in place to protect those who will refuse the ministry of women bishops.

Father Alexander goes on to assert that the problem he has with this is the same as mine: that this presents a concrete divorce of the Anglican ecclesial body from the Roman Catholic & Orthodox Church. It makes reunification an impossibility. It raises further, deeper concerns about Anglican orders, as tracing individual lines will no doubt become a more important preoccupation for Anglican ministers, and surely, this makes the whole thing even more of a nonsense?

Meanwhile, Mgr Keith Newton, the leader of the Ordinariate of Our Lady of Walsingham has issued an invitation to Anglicans “considering their future” to attend an “exploration day” in September. The Catholic Herald reports:


“Having agreed to permit women priests in 1992, the Church of England’s decision to allow women bishops is the next logical step. What is undeniable is that both developments make harder the position of those within the Church of England who still long for corporate unity with the Catholic and Orthodox Churches,”

“Benedict XVl’s decision to set up the ordinariates – allowing former Anglicans to enter the full communion of the Catholic Church, bringing with them much of the Anglican heritage and tradition – was made in response to repeated requests from Anglicans who longed for unity with the Catholic Church. It was a prophetic and generous ecumenical gesture because it demonstrated the possibility of unity of faith with diversity of expression.”

The exploration day, known as Called To Be One, aims to make the ordinariate more widely known and understood. Groups across the country will stage different events on September 6.

“Each event will be different – it may be Choral Evensong followed by refreshments and a presentation about the ordinariate or it might be a debate or a talk – but all the events will focus on the vision for Christian unity at the heart of the ordinariate,” said Mgr Newton.

“All who are interested – whether because they are considering their future or just because they would like to see more of what we are and what we do are warmly invited to attend.”

In response to the Church of England’s decision, Archbishop Bernard Longley, chairman of the Department for Dialogue and Unity of the Catholic Bishops’ Conference of England and Wales, said :


“The Catholic Church remains fully committed to its dialogue with the Church of England and the Anglican Communion. For the Catholic Church, the goal of ecumenical dialogue continues to be full visible ecclesial communion.

“Such full ecclesial communion embraces full communion in the episcopal office. The decision of the Church of England to admit women to the episcopate therefore sadly places a further obstacle on the path to this unity between us. Nevertheless we are committed to continuing our ecumenical dialogue, seeking deeper mutual understanding and practical cooperation wherever possible.”

I understand this charitable response to the Anglican decision to move off in the opposite direction to orthodoxy as an attempt to express the love and fellowship all Christians should feel as well as an expression of the good will which has, no doubt built up between those involved in the discussions. However, it also clearly notes that the paths are now further divergent. What a shame this what not a consideration for the Synod.